The sad passing of journalist Alan Henry at the age of 68 motivated us to dig into our archive to recall some of his greatest work. As many have stated in the past couple of days, AH will forever be associated with his years of service to our former sister publication Motoring News, his columns for Autocar and also for his refusal to toe the line of his Fleet Street rivals as the Grand Prix correspondent of The Guardian. 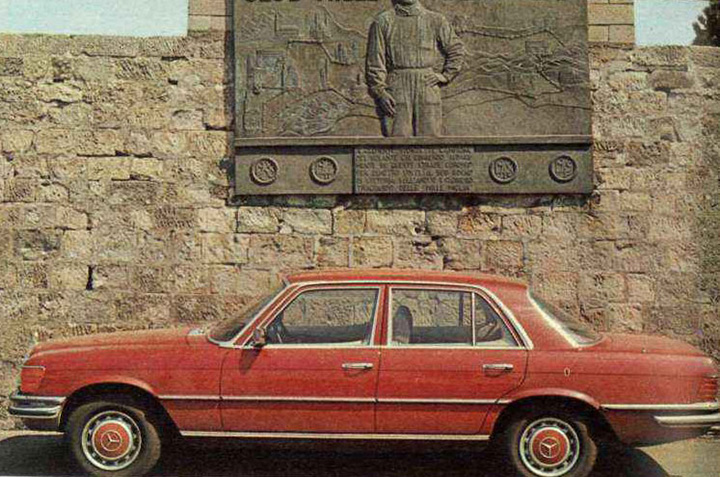 But his contribution to Motor Sport in the 1970s and ’80s should not be overlooked, during decades in which his ‘voice’ was as distinct in our pages as those of Bill Boddy and Alan’s dear friend Denis Jenkinson.

Mark Hughes’ touching tribute to ‘AH’ offers a wonderful flavour of the man, and as an accompaniment we present here one of his best known articles for Motor Sport.

For the June issue of 1975, AH talked Jenks into an unforgettable road trip, to revisit the route of the Mille Miglia on what was then the 20th anniversary of DSJ’s ride to victory with Stirling Moss. Reading it now, it’s striking how relatively recent that feat still was. Last year we celebrated the anniversary again, to mark 60 years since Moss and Jenks made special history together. But in 1975, the passing of time was only the equivalent of recalling Damon Hill’s Formula 1 world title today. It must have felt like yesterday to Jenks.

AH’s ‘nostalgic look’ at the Mille Miglia is memorable, not least for the spectacular ‘Rupert the Bear’ trousers he’d chosen for the occasion – and the contrast in height between a giant of a man… and someone famous for being, ahem, somewhat vertically challenged. 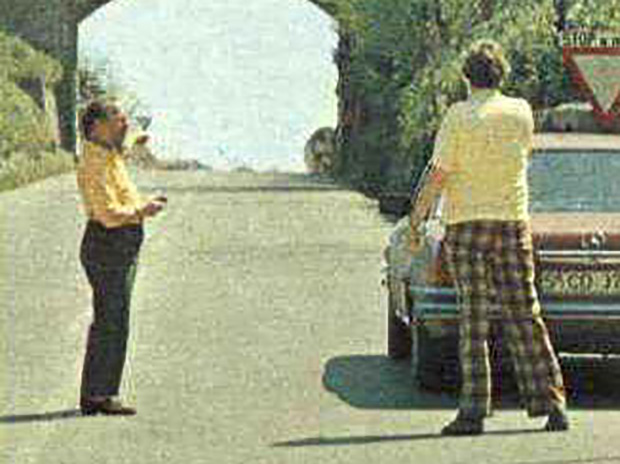 AH wrote countless Grand Prix reports for Motor Sport over the years, covering the races when Jenks didn’t travel, and contributed road tests on occasion as well. But his Mille Miglia story from ’75 remains a keystone not just of the decade, but of our whole archive.

Twenty years ago, on May 1st, 1955, Stirling Moss became the only British driver ever to win the Mille Miglia open-road race round Italy. This tremendous demonstration of race driving was seen at close quarters by only one person, Motor Sport‘s Continental Correspondent Denis Jenkinson, who sat alongside Moss in the Mercedes-Benz 300SLR during that epic drive, helping him to concentrate totally on controlling the car by forewarning him of the approaching hazards. The story written by D.S.J. about this amazing ride with a top-class racing driver has become a classic piece of motoring documentation, the fascination it holds for enthusiasts being heightened by the fact that the Mille Miglia no longer takes place, indeed there is no such open-road race left in Europe. Changing attitudes of drivers and organisers over the question of safety as well as an increasing reluctance on the part of Governments to allow the individual the choice to put himself at danger have markedly changed the face of motor racing over the past generation and the Mille Miglia in consequence, succumbed to the pressures of “public opinion” 18 years ago. Nevertheless, memories of the race still hold a magnetism and interest for enthusiasts who were barely of school age in 1955 and we recently allowed ourselves a generous helping of nostalgia in re-tracing the route of this 1000-mile motor racing adventure. 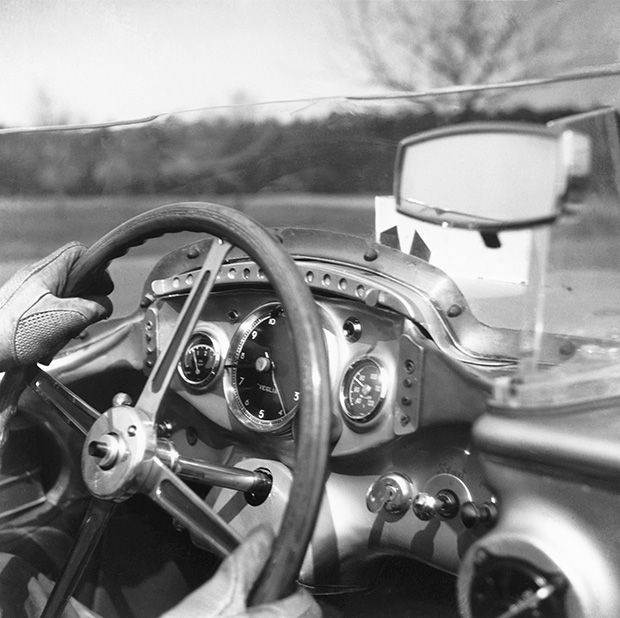 The Daimler-Benz A.G. built the winning car for the Mille Miglia on two occasions, the first being in 1931 when Caracciola drove a Mercedes SSKL, to victory in 16 hr. 10 min. 10 sec. and the second being in 1955 with the eight-cylinder fuel-injected, desmo-dromic valve-gear, 3-litre 300SLR sports racing machine in which Moss and Jenkinson completed the course in 10 hr. 07 min. 48 sec., an average speed of almost 98 m.p.h. On both occasions a non-Italian driver won the event, the only two Mille Miglias in its history from 1927-1957 in which this ever happened, and with Moss’ time over the route standing as an all-time record, it only seemed appropriate that we should re-trace the route in a modern product of the Stuttgart factory. With the assistance of Erik Johnson, P.R. of Mercedes-Benz (GB), and the press department at the factory, a 450SE saloon was made available for us and on a Tuesday morning in the Spring we flew to Stuttgart in company with Stirling Moss for a preliminary visit to the factory test circuit. Before we actually set off for Brescia, the starting point of the Mille Miglia, it was intended that we should be taken for a few laps round the Mercedes test track in one of the 1955 300SLRs and one of the sleek, purposeful silver German cars was ready waiting for that very purpose on our arrival. Looking as impressive as it did twenty long years ago, this 300SLR carried number 658 in distinctive red letters along its side, this being Fangio’s number in the 1955 Mille Miglia, indicating that it started the event at 6.58 a.m.; Moss’ starting time was 7.22 a.m., his car consequently running with that number, and it was noticed that the “exhibition” 300SLR was a development car, having as it did outboard front brakes instead of the original inboard arrangement.

The whole approach to motor racing adopted by the Mercedes-Benz engineers was that of a technical exercise and the essentially practical design of the 300SLR makes this abundantly clear, it being a typically German, highly efficient tool for the job in hand. Attractive in a purely functional sort of way, we all felt that the 300SLR reflected the German personality inasmuch as it was built to win long-distance sports car races efficiently and with the minimum of difficulties. The fact that the 300SLR is also a good-looking car seems to be incidental to its function. In the same way as one gets the impression that the 450S Maserati was built for its sheer beauty, Maserati then saying “this looks good, we’ll race it in the Mille Miglia”. Every detail learnt from the pre-War Mercedes motor racing programme had been carefully logged and incorporated in the design of their post-war cars if it was felt to be useful or relevant. For example, the 300SLR has three small holes on its scuttle, immediately in front of the windscreen, and these were designed to take a temporary “slot in” screen should the main screen be broken by a stone. Hermann Lang was nearly suffocated in the face of a 170 m.p.h. breeze at Donington Park before the War and this refinement was developed for successive generations of Mercedes racing cars including the 300SLR as a result. Of course, even the best road racing car is ineffective in a 1000-mile race if its crew fail to familiarise themselves with tyre changing and plug changing procedures and other mechanical details of the car, so Moss and Jenkinson practised hard at these tasks in addition to lapping the Mille Miglia route many times before the event itself. The whole effort was clearly a monumental task of organisation and co-ordination, but the painstaking Mercedes-Benz approach paid dividends and the research and development department they maintain to this day would make contemporary racing car constructors drool with envy. While they no longer involve themselves with motor racing, they still remain very much abreast of the latest technical developments, and a few quick laps in the passenger seat of a rotary-engined C111 coupe proved just as memorable as the spine-jarring ride of the 300SLR. The 4-rotor Wankel engined prototype accelerated from rest to 100 k.p.h. in 4.8 sec, and easily attained 150 m.p.h. and its well-damped ride and quiet interior was a striking contrast to the harsh practicality of the 1955 sports racing car. Amongst the Mercedes-Benz personnel present at the test track was former racing driver and competitions manager Karl Kling, a member of the four-car Mercedes team in the 1955 Mille Miglia, and it was good to hear from him that the gargantuan Alfred Neubauer, Mercedes team manager from the late 1920s who had presided over the racing programme in 1954 and 1955, is still alive and well at the splendid age of 84 years.