A sensory overload for fans and drivers, the Nürburgring 24 is the ultimate motor sport spectacle 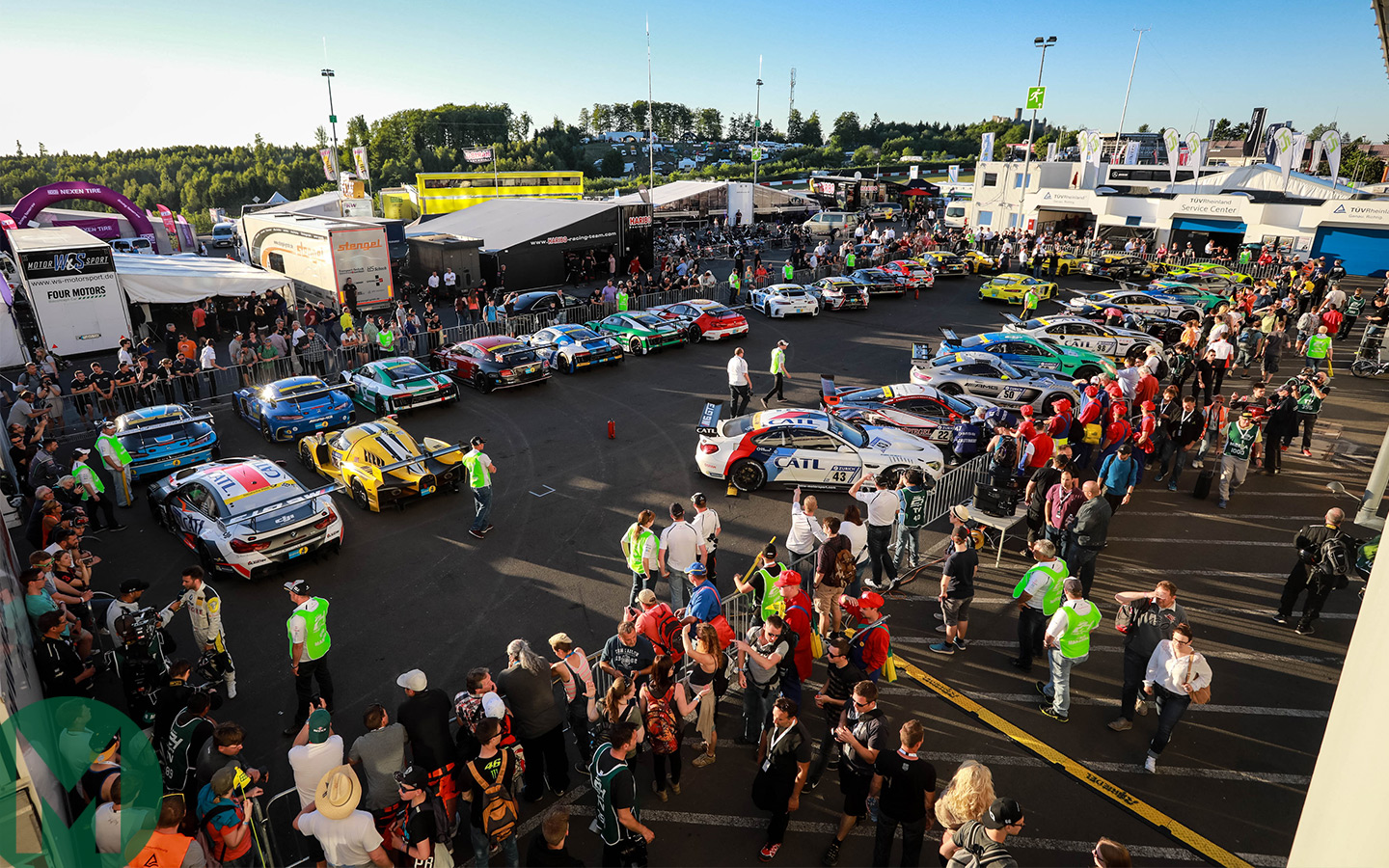 There are certain things you expect when you attend the Nürburgring 24. You expect a fox-tailed Opel Manta to trail the 600hp GT3 cars; you expect drunk Germans to light fires and to pump ‘90s rock whilst dosing in their living-room-for-a-week scaffolding structures; you expect writing on the track; an incredible mix of rapid GT and sluggish touring cars and, perhaps foremost, you expect rain. I was delighted to find that all of these remain joyfully true.

Charging down the highway running adjacent to the 2km-plus long Döttinger Höhe straight, you only begin to gauge a sense of scale and place. Campsites overflow with tents and flags and the road’s hard shoulder becomes a highway for the myriad camp-chair-wielding fans trekking in for another day at the track. When the unmistakable thunderous rumble of a Bentley blasts past on track behind the trees to our right, only the cloudless sky detracts from a classic Nürburgring-24 scene.

Heading out into the ‘forest’ for the first time – the term thrown around by the regulars to describe the Nordschleife – the expected madness quickly became apparent. As three GT3 cars rumble over the kerbs to my left, two beer-drinking Germans sit in a Viking ship to my right. Above, a bear in a deck chair hangs from a crane and two men take flight across the path in front on a sofa tied to ropes as a swing. Scaffolding platforms – kitted out as complete living rooms with airchairs, TVs and carpets – are countless and beyond the replica Mercedes F1 hospitality suite there is a man playing the piano next to a beer can-antlered moose. 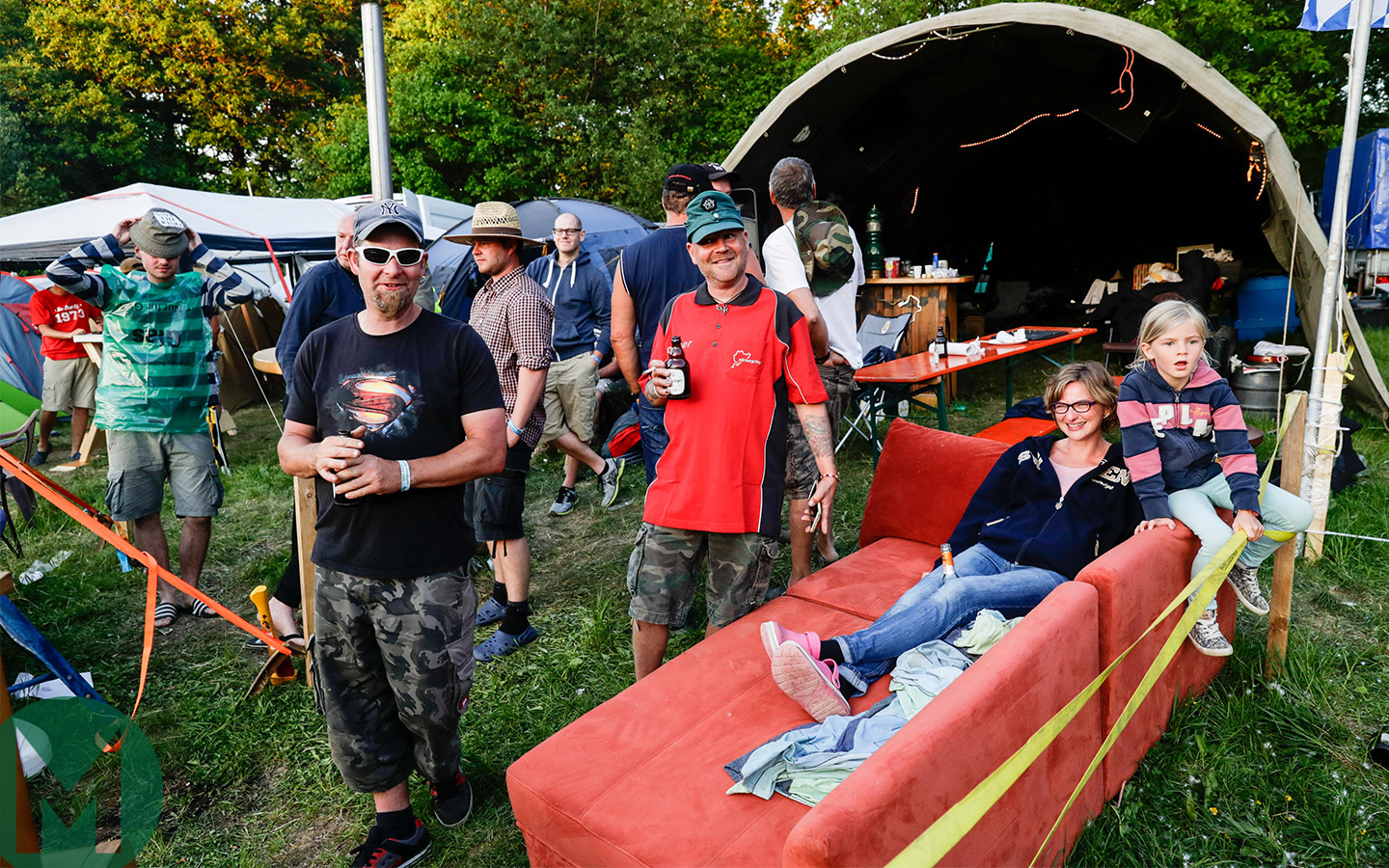 The German imagination clearly knows no bounds, but their genuine passion and knowledge of the sport is also incomparable. So many are kitted out with the latest gear and flags, and after watching the leaders flash by on track they return to the comfort of their armchairs under shaded canopies to watch the race intently on their TVs or projectors. When the popular Glickenhaus came through to claim a shock pole on Friday evening, the crowd was raised to its feet in appreciation of the performance. Out on the spectator banks the event feels like a rock concert with a race track strung through the middle, but there’s no doubting that the 200,000 fans make their annual pilgrimage foremost because of their genuine love of racing.

The incredible closing speeds become apparent at the dramatic downhill sweep of Brünnchen where, just as a flare goes off and smoke drifts across the huge crowd, a lone Ferrari 458 slices through on the inside of a VW Golf. It clears the next turn before the Golf has rumbled by – the 25km-long track is rarely quiet for more than 10 seconds. During the first six hours the race lead changes 11 times, a sure sign that the organisers have got the controversial balance of performance just right. You are left pondering what it must be like to ride the ‘Ring rollercoaster as a driver through the madness of the trackside maelstrom.

“All the stories you hear, they’re true,” Peter Dumbreck confirms back in the quiet calm of the Falken hospitality lounge. “You are focused in on what you’re doing and try to make it tunnel vision on what’s happening on track, but of course there are points where you’ve got a second to look and glance. Heading down to Wippermann or Brünnchen there’s a lot of fans there high on your left and you see all the flags, the smoke and everything. 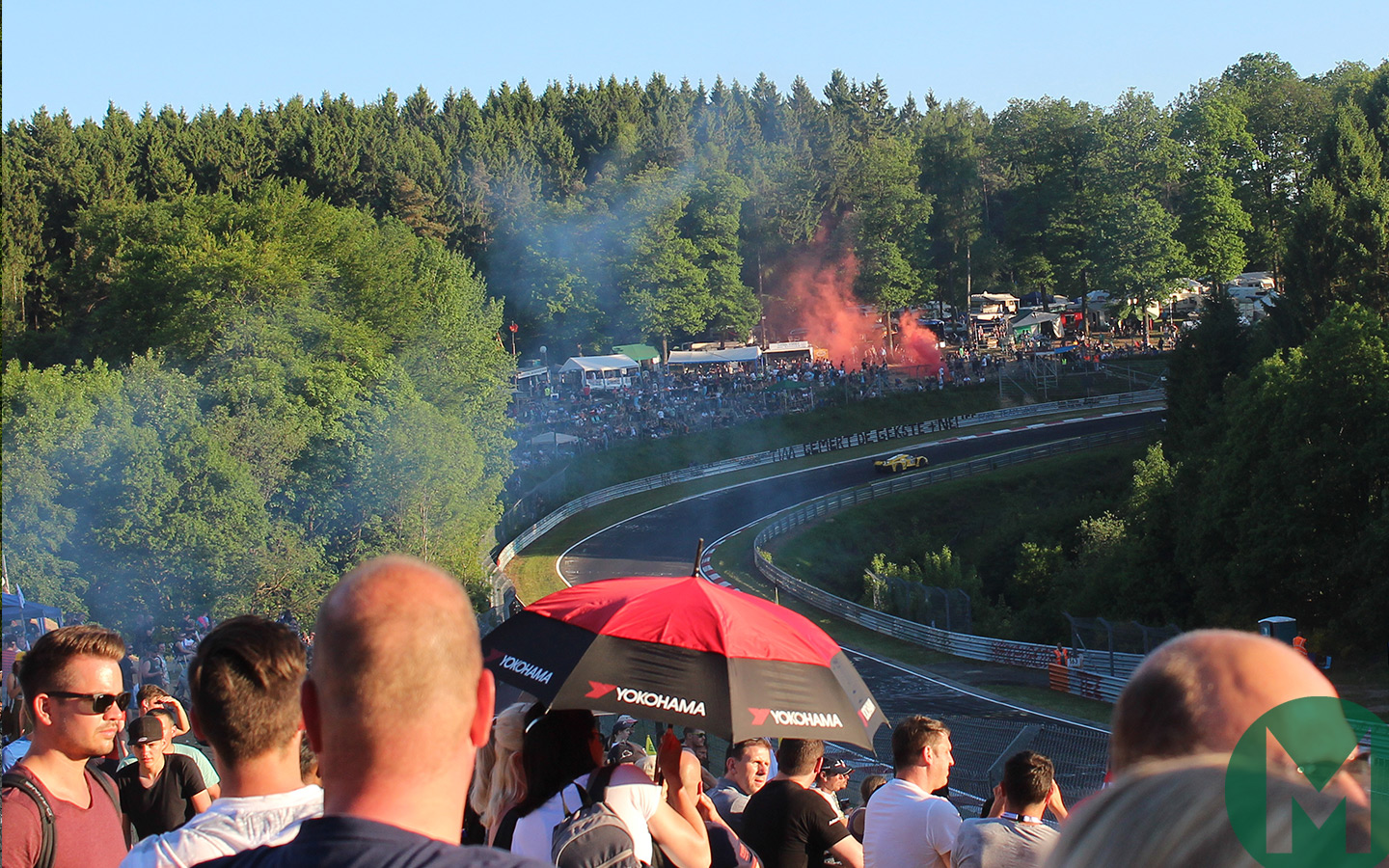 “During the early stints you tend to be more focused on what you’re doing, but as it opens up and the race goes on, maybe on your third or fourth stint and as darkness arrives, it becomes much easier to see what’s going on in the crowd. There’s a lot of lights, a lot of fires, you smell the fireworks and the barbeques and you see the smoke drifting across the track. It’s quite a bizarre feeling, but at the end of the day we’re here for a motor race. You can’t take your mind off it. This place is huge and if you give it a second, it will bite you.”

Night at the ‘Ring is even more of a sensory overload for a fan. The smell of beer, currywurst and barbeques hangs in the air, mixed occasionally by the unmistakable burning of brakes or rubber. Pupils dilate as blue-and-white headlights cut through the trees and disco lights and lasers dance across the spectator banks. The track-hugging path cocoons through canopied camps and slaloms between campfires and armchairs as music pumps loud and fireworks explode above. The cars’ race positions usefully light up on the front of car windscreens, but at night the race becomes a sideshow to the madness of the event. 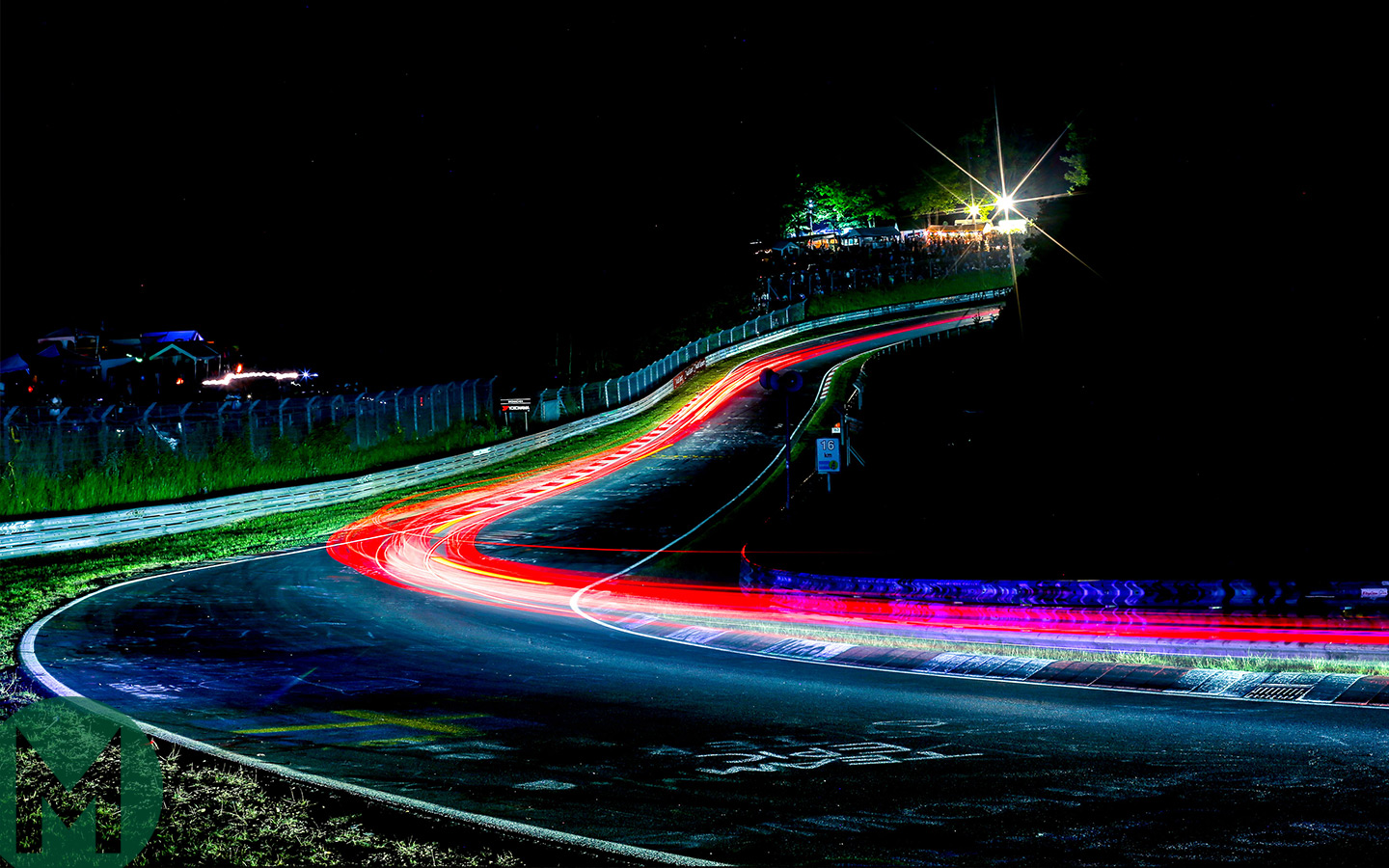 “Night is more challenging for a driver – twofold,” Dumbreck admits. He says the race finds a rhythm at night, but the sense of place and challenge of racing amongst 160 other racecars multiplies too. “It’s harder to overtake and to see the limits, even though you know them so well. You get amateur drivers who are doing maybe their first 24-hour race and it’s maybe their first race around here. They tend to stick a lot more to the middle of the track and don’t use the limits, so you’re trying to work out where they’re trying to go. ‘Are they actually going onto the racing line here, or can I take the racing line?’ Every hesitation costs you a few tenths of a second.”

The Nürburgring 24 is far removed from the slick professionalism of Le Mans. It’s an entirely different driving challenge too, as Dumbreck describes.

“As 24-hour races have gone on, they’ve become sprint races because cars are more reliable and you tend to have to push harder and longer. At Le Mans you’ve got a bigger speed difference between the faster and slower cars, so when you’re in one of the faster cars you’ve got to really know when and where to overtake. But there’s a lot fewer of them; for us, we have a big speed difference between say a MINI or a GT3 and there are a lot of slower cars circling. 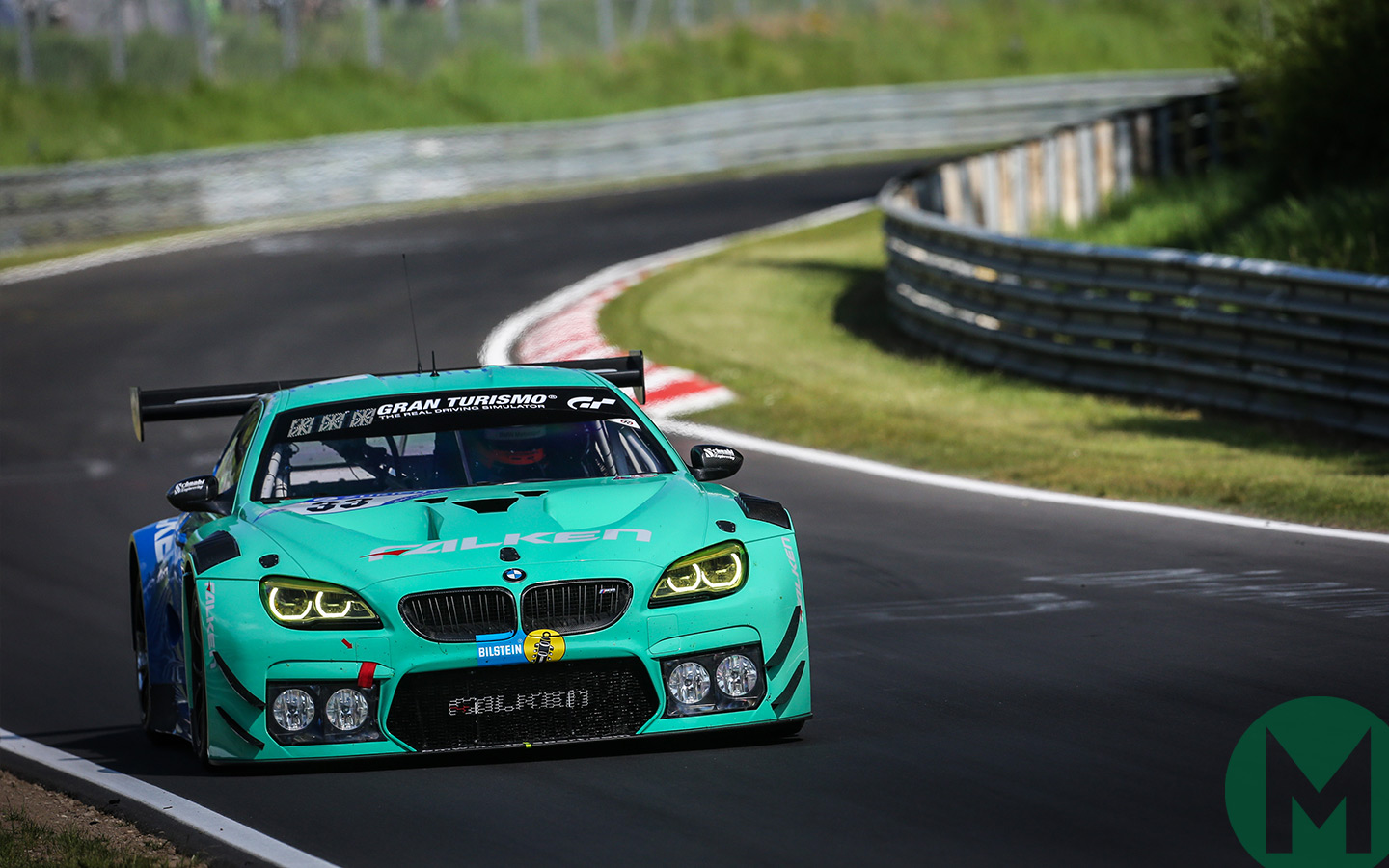 “It’s narrower, there are higher kerbs and it requires more of a focus. At Le Mans you sit a long time on the straights just twiddling your thumbs. We have a long straight here as well, but with the addition of some real tight twisty stuff, so there’s no room for error. You’re travelling at 220kph through a flat-out kink and then come across a slower car who’s doing maybe 150 or 160. You’ve got to decide when and how you’re going to overtake them, at times putting two wheels on the grass to do it.”

This year’s race ended in classic high-drama, with a last-hour downpour after 23 hours of dry running shaking the dynamic of the race one final time. Some late pitstop drama and a subsequent gamble on wet tyres carried Audi Sport Team Land to an impressive comeback victory in a fiercely contested race, where five different manufacturers filled the top seven race positions.

Both on and off track, the organisers of the N24 have got the balance just right. It’s the remarkable access, sheer variety of cars and laid-back organisation that makes the event feel like the world’s largest club race and that draws six-figure crowds back year on year. Race organisers around the world: there’s an awful lot to be learned.