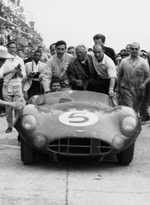 The cover line reads: ‘Mission Le Mans!’ – and what a mission it is. Fifty years after its one and only overall victory at the 24 Hours, Aston Martin is heading back to La Sarthe for an audacious attempt at repeating history. It was up against it in 1959. This time it’s almost mission impossible.

As the key figures at Aston Martin Racing admit in this month’s cover story, a win for its Lola prototype is a long shot. The might of Audi and Peugeot, with their supreme turbodiesel-powered cars, will leave Aston’s glorious V12 gasping. Best of the ‘petrol cars’ is the realistic ambition and with a fair wind the Gulf cars could perhaps edge a podium finish.

But enough of the sensible stuff. Let’s get in the right spirit. After all, a 100-1 outsider won the Grand National this year… AMR, quite rightly, believes it must at least turn up at Le Mans in this special anniversary year, in a very British have-a-go tradition. This is the kind of project that reminds us why we love Le Mans.

And despite the odds, don’t make the mistake of underestimating this campaign. Yes, it has been put together late, but both chassis and engine are proven over distance and the team has already won on its debut in Barcelona over the distance of 1000kms. Aston Martin, Prodrive and Lola mean business – and the British masses who love Le Mans will have something great to cheer come June 13/14. Whatever the outcome, the race promises to be special.

Elsewhere in the June issue Nigel Roebuck gives us his usual forthright take on the month in Formula 1, including McLaren’s troubles and the fantastic start to the season we have all enjoyed so much. The best story so far has to be Brawn GP and Jenson Button’s flying start. Adam Cooper brings us the inside story of the team’s emergence, with an exclusive interview with the man whose name is on the car: Ross Brawn.

With one eye on the present and one on the past, we also feature a revealing and entertaining Simon Taylor ‘Lunch with…’, his guest this time being former GP driver and team owner Jackie Oliver. Jackie’s account of replacing Jim Clark at Team Lotus shows the tough side of Colin Chapman, but you get the feeling Oliver could take it. As he would show through the next three decades, he was pretty tough himself.

We also track test Stirling Moss’s favourite GP car, the Maserati 250F, Doug Nye looks back at Aston Martin’s dramatic sports car world title Day at the Races at Goodwood in 1959, and I try my hand at ‘bouncing’… And no, it has nothing to do with nightclubs.