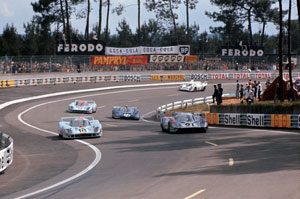 Do you remember the great days of Les Vingt-Quatre Heures du Mans? When an annual pilgrimage to the little town in the Loire was something not to be missed? If you couldn’t be there, you’d tune in to BBC radio for those brief news reports, the late night bulletins always the most atmospheric, romantic even, with the sound of the cars wailing past the pits. If you were lucky, you’d get to see some pictures on BBC television, usually the start on Saturday afternoon and the finish on Sunday with the cameras lingering on that famous clock as the hands ticked round to 4pm. Remember when Ford took on Ferrari, when Porsche came with the long-tail 917, the arrival of the glorious-sounding Matras, the big yellow Renaults and the ceaseless scream of the Mazda? That’s all fairly recent of course. We could go back further, to the triumph of Jaguar and the heroics of Duncan Hamilton, the almost military presence of Mercedes-Benz and the night Phil Hill danced his Ferrari through driving rain to a last-gasp victory. 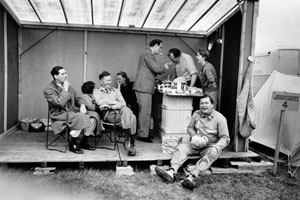 (Left-to-right in the Jaguar paddock at Le Mans in ’54: Peter Walker, Peter Whitehead and Duncan Hamilton (with a bunch of bananas). Behind include Mrs Lois Rolt (seated), Tim Seccombe and Mary Walker (behind Hamilton))

These were the days when the 24 hours of Le Mans was truly the most famous motor race in the world, when people bought cars because the manufacturer had won at La Sarthe, thinking they must be both rapid and reliable. Us Brits travelled in our tens of thousands to France that weekend in June, pitching our tents, watching in awe at the speed on the Mulsanne and tramping through the woods to see the cars flash through Indianapolis corner. The food was good, and the wine, for this was France and those catering vans at Brands seemed a planet away. OK, you were so tired – and sometimes soaked – by the end of Sunday that you swore you’d never go again. But you did. It was fun, romantic, exciting and knackering.

Things are different now. The race still runs for 24 hours, and the wine still tastes good though the exchange rate has done for the price. But the long blast down Mulsanne has been broken up with chicanes, and wire fences force us to watch the cars at a distance. Health and safety. For us, and them. And then there’s the Audis, the diesel-powered Audis. Much to the chagrin of legendary Le Mans heroes like Henri Pescarolo, the silver cars have come, conquered – and stayed.

I mention all this because next weekend sees the running of another famous endurance race. We’re off across the Atlantic to see the Audis at Sebring, where the mighty German cars have won every time this century. Extraordinary. A mirror of Le Mans in many ways. Sebring has a fine history, it’s one of the classic long-distance events, and the old airfield circuit remains pretty much as bumpy and basic as ever it was according to Allan McNish, who aims to win yet another one for Audi at the weekend. But this year could just be different. Peugeot is entering a single car, in preparation for Le Mans, and in the hope of getting one over the Audis in this duel of the diesels.

We know the beautiful Peugeot is quick. We saw that at La Sarthe last summer. If it was as fast as it looks, it would win by miles. This is surely one of the best-looking racing cars of the modern era. But can Peugeot get on terms with the sensationally reliable Audis over a 12-hour period, let alone double that distance in June? We don’t know, but it will be worth watching, and it will be some kind of guide to what’s in store at Le Mans. Peugeot is desperate to win in France, of course, while Audi is in no mood to give up its hard-earned reputation as the fastest diesel in the world (we’re not counting the JCB Dieselmax world land speed record machine). 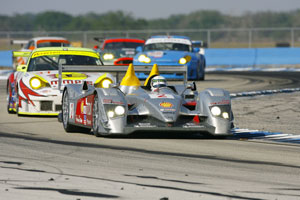 To Sebring then, and memories of reading about Stirling Moss’s great feats around the wide-open runways, remembering pictures of headlamps lighting up those warm Florida nights, with drivers in shirtsleeves and sneakers and shades. All very Steve McQueen. Like Le Mans though, it will be different now, if only because of the new world order in long-distance sports car racing. Audi dominates, Peugeot challenges, the fans long for a battle. Which TDi will they want to buy on the Monday morning, believing that racing can only improve the breed? Well, I have owned both marques, and both were damn good in their different ways. I will be there as an impartial observer but I have a gut feeling that Peugeot will have to wait until June before it gets a proper crack at making a dent in Audi’s armour. 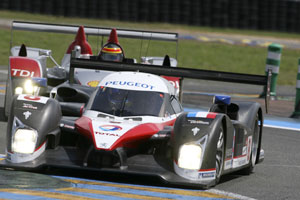