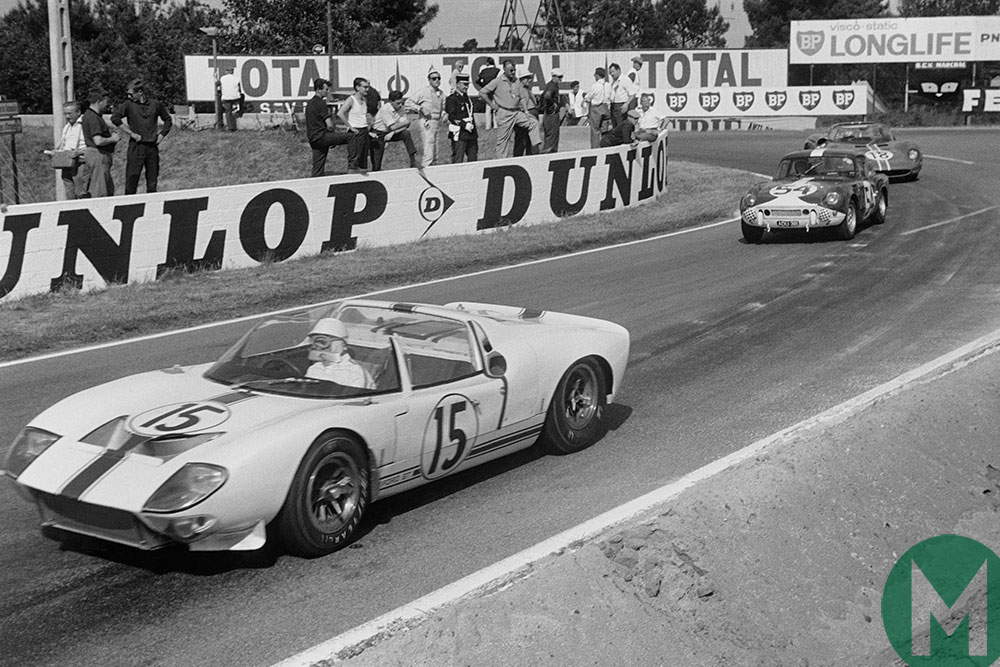 In the early 1960s, Ford was winning in stock car racing, drag racing and sports car racing. But that was mainly in the United States with the Shelby Cobras, and Henry Ford II had eyes for European success.

The story goes that Ford wanted to buy Ferrari in 1963, but Enzo wasn’t keen on selling up. Early interest in selling cooled, while Henry’s ire grew. Just three years later the tables had turned: in 1966, Enzo backtracked was considering a merger deal… but Ford already had a new weapon born out of frustration: the GT40.

“If I can’t buy Ferrari, I’m going to beat Ferrari,” was Henry Ford’s fabled call to arms after his early offers were batted away.

So, in 1964, the Ford GT Le Mans project began, and by 1965 Lee Iacocca was well on his way to building a Ferrari-beater.

Twelve prototypes were produced by Ford between January 1964 and April ‘65, including the Slough-built GT/109 roadster that eventually made it to Le Mans and now heads to auction with Mecum.

Shelby took delivery of GT-109 and began preparing for the 1965 Le Mans 24 Hours. The car rolled off Shelby’s floor on June 9, 1965 with Halibrand magnesium wheels, new air dams in the front and a Cobra 289 CI engine with five-speed gearbox.

Other modifications included new side-mounted engine oil radiators, vents under the rear-wheel arches, a higher spoiler, new fuel pumps, an expanded water radiator and removable rollover sections that made it easier to access the engine. It was ready to race.

It tested at Le Mans with Andre Simon and Jo Schlesser at the wheel and Ford of France’s red, white and blue colours on the body.

GT/109, the only Ford GT Roadster ever to compete at Le Mans, would be driven in the great race by Maurice Trintignant and Guy Ligier just a few weeks later. It completed just 10 laps, retiring with a gearbox problem.

None of the GT40s finished that race, and Ferrari won again through Masten Gregory and Jochen Rindt in the 250LM. The Prancing Horse wouldn’t win Le Mans outright again, and shows no signs of changing that, while Ford and its GT was on the cusp of dominance.

GT/109 was rebuilt and used as a development vehicle for the J-Car project, giving way for the GT/110 Roadster that won the 12 Hours of Sebring. GT/109 was sold on to a Hollywood stuntman and customiser when Ford racing director said, “No problem, you can have it. We’re done with the GT Roadster program.”

That customiser was Dean Jeffries, who worked on James Dean’s 1955 Porsche 550 Spyder. Jeffries restored the car and kept it until he died. Two other owners cared for it and restored it to concours standards.There’s DNA of the winning Ford GT racers in this prototype. Without GT/109, or any of its siblings, Ford would never have conquered Ferrari in the 1966 Le Mans 24 Hours. It’s just one of two surviving examples of the seminal GT prototype, and a piece of history at that.

It could change hands for millions of dollars at Mecum Auctions’ Kissimmee sale in Florida on January 3.