Many fans enjoy vivid memories of the original unlimited Can-Am series. The big sports-racers from that era are also very popular today in historic races around the world and it’s not hard to understand why. Lots of power and noise; swoopy, sometimes menacing shapes; and everybody doing their own thing year after year as both big and little guys built an exciting succession of thoughtful, different and dare I say innovative new cars. 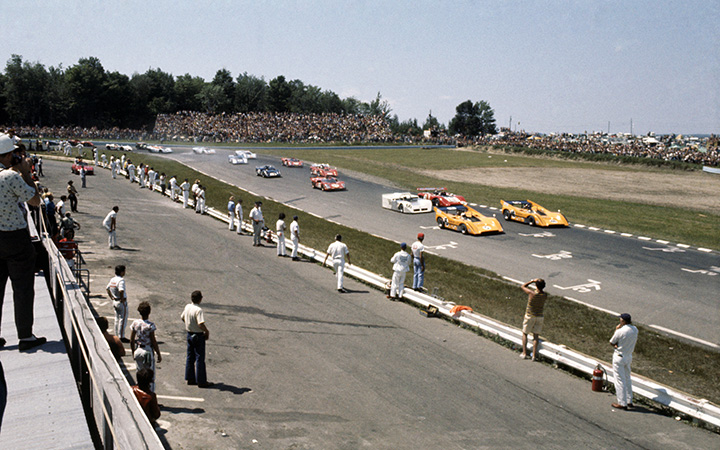 The Can-Am ran only for nine years from 1966-74 and during that time the cars and engines evolved rapidly. Consider that Bruce McLaren was on the pole at Elkhart Lake in 1967 aboard a beautiful McLaren-Chevy M6A, lapping the four-mile track in 2min 12.6sec, averaging 108.597mph. Six years later Mark Donohue became the first man to lap Elkhart in less than two minutes as he qualified Penske’s turbo Porsche 917/30 fastest in 1min 57.518sec for an average of 122.534mph. Fifteen seconds improvement in lap time over six years says it all. 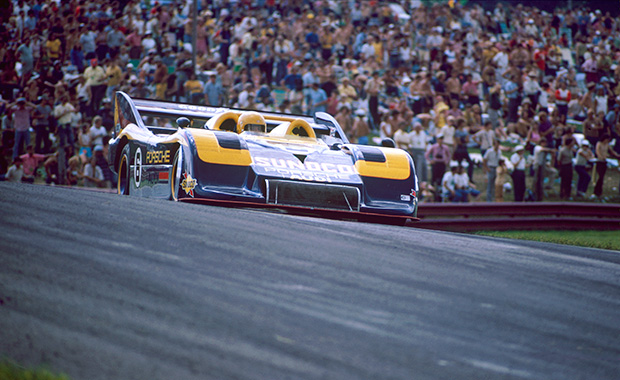 It was my pleasure to cover the last two years of the hoary old Can-Am series in 1973 and ’74 when I was a rookie freelance race reporter for Autosport and also for Autoweek in the USA. My love of big sports-racers started at the Players 200 at Mosport in 1961. It was the first major race at the great road course outside Toronto and I was a 12-year-old kid who convinced my father to drive us out to the track to see Stirling Moss win aboard a beautiful lime green Lotus 19. Moss beat a trio of silver Porsche Spyders driven Jo Bonnier, Oliver Gendebien and Ludwig Heimrath and my already growing passion for racing was pushed to new heights.

We were blessed to have a fine road course like Mosport nearby which promoted two big sports car races each season through the next half-dozen years. The Player’s 200 took place in the spring with the Canadian Grand Prix running late in the summer, ultimately becoming a Formula 1 race in 1967.

During that time I was lucky to see guys like Peter Ryan, Masten Gregory, Lloyd Ruby and Chuck Daigh race Lotus 19s before everyone started stuffing American V8s into their new lightweight rear-engine cars. It was a pleasure to watch Bruce McLaren race his first Can-Am car, the Oldsmobile-powered, Cooper-based ex-Zerex Special, followed by the arrival of the curvaceous McLaren M1A, then the more purposeful M1Bs raced by Bruce and Chris Amon in 1966, the first year the Can-Am series was run. 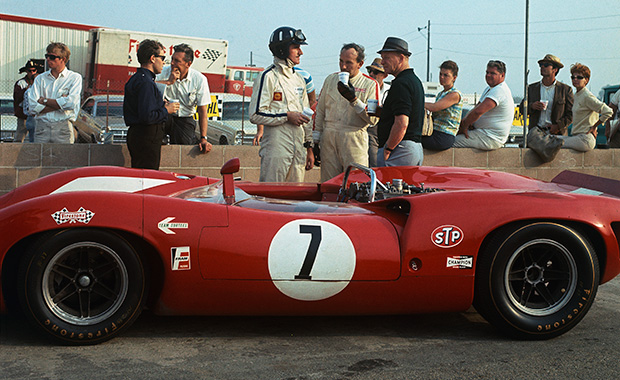 There were only six races in ’66 at St Jovite, Bridgehampton, Mosport, Laguna Seca, Riverside and Stardust Raceway in Las Vegas and the inaugural Can-Am championship was won by John Surtees driving a beautiful red factory/Team Surtees Lola T70. Surtees won at St Jovite, Riverside and Las Vegas, beating Donohue and McLaren to the title. Donohue drove Penske’s Lola T70 to win at Mosport while Dan Gurney won at Bridgehampton in All American Racers’ T70, thus scoring Ford’s first and only Can-Am victory.

Fourth and fifth in the first Can-Am series behind McLaren were Phil Hill and Jim Hall who raced Hall’s high-winged Chaparral 2Es that year. Hill and Hall finished first and second in the two-heat race at Laguna Seca in ’66 and incredibly that turned out to be the only Can-Am race a Chaparral would win.

Of course, the Chaparrals defined the Can-Am. They were breathtakingly spectacular cars that broke new ground, leading the sport’s aerodynamic and ground effect revolution. Today, almost half a century later, the virgin white Chaparrals continue to hold a special place in the hearts and minds of race fans around the world. 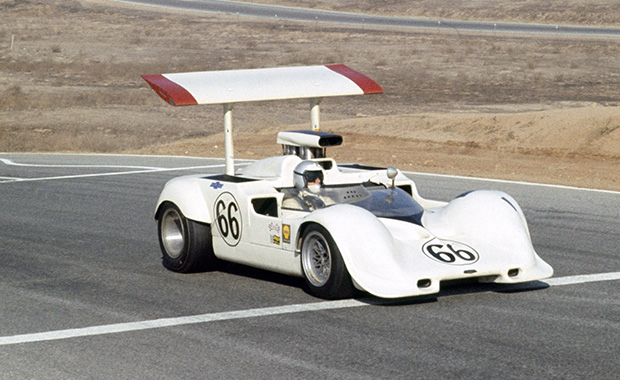 For my part, I’ve enjoyed with growing pleasure over the years having had the privilege of covering the Can-Am in 1973 and ’74. In ’73 I was able to watch Mark Donohue tame the incredible Porsche 917/30 with more than 1000hp for qualifying and in ’74 I saw Jackie Oliver and George Follmer duke it out for the championship aboard a pair of sleek, menacing UOP Shadow DN4s.

Donohue qualified the 917/30 on pole for all eight races in ’73 and won six of them. But it was hardly boring because Donohue and the turbo Porsche were amazing to watch just motoring around on their own. There was also a spectacular newcomer named Jody Scheckter who wrestled with Vasek Polak’s one-year-old 917/10 as well as the previous year’s champion George Follmer and team-mate Charlie Kemp in Bobby Rinzler’s pair of 917/10s.

There was also an eclectic selection of older McLaren M8Ds and 8Fs, plus a few of the impressive M20s. Mario Andretti drove a twin turbo 8-litre Chevy-powered M20 in practice at Laguna Seca and Riverside that year. It was a beast to drive and would light up the tyres in any gear. The mere memory of watching Mario at work in that over-powered machine makes me say, ‘Wow!’ 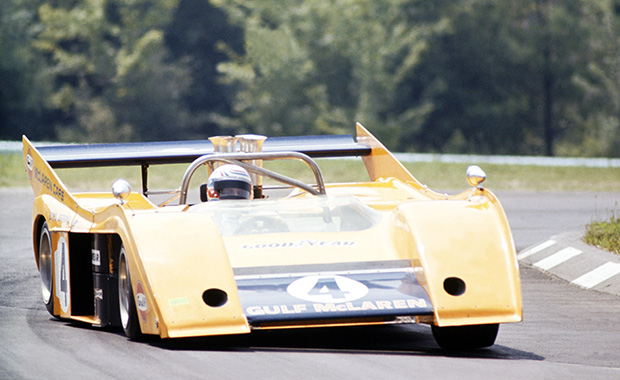 At Laguna Seca in 1973 I was able to enjoy a brief three-lap ride with Jackie Oliver in his Shadow DN2 powered by a 494ci Chevy. I sat on the floor beside Oliver without benefit of a seat or any belts and my experience was as terrifying as it was illuminating. Each time we rocketed over the hill into the Corkscrew I was sure I was going to fly out of the car and meet my maker, but I was able to hang on, literally for dear life.

Meanwhile, it was sad to watch and cover the demise of the Can-Am and even sadder to witness what happened in the following years as the SCCA turned Formula 5000 into the ‘new era’ Can-Am starting in 1977 and the SCCA’s professional racing division soon fell into a death spiral.

The SCCA’s primary failure was its inability to manage the rapid onslaught of new technology and ideas. Rather than trying to embrace and contain new concepts and technologies their solution was to ban or severely hobble the likes of Jim Hall’s Chaparral 2J ‘sucker car’ or the 917/30.

Nor was the SCCA any good at promoting and marketing the Can-Am, F5000 or the ‘new era’ Can-Am. Between the mid-’60s and mid-’80s the SCCA went from briefly being American racing’s king of the hill to a non-entity in professional motor racing. 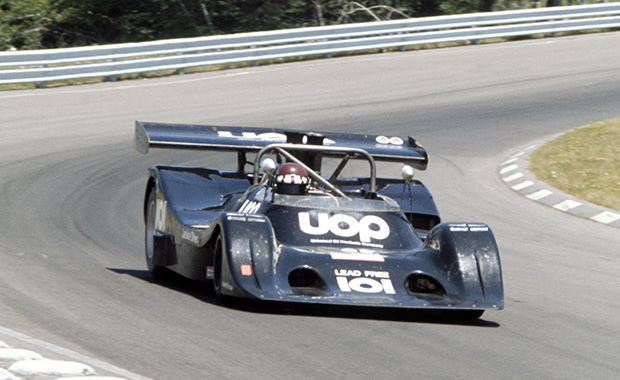 Back at Mosport one day in 1977 I had an unhappy conversation with Burdie Martin, the boss of the SCCA’s pro racing division. “You’ve written some terrible things recently about the SCCA,” Martin complained. “Yes I have,” I replied. “Unfortunately, they’re all too true.”

As I recall, Burdie didn’t have much to say but 30 years later he told me I was right to have written so many strongly critical words about how poorly the sport was managed. “We completely dropped the ball, didn’t we?” Martin remarked. “After that, we just plain fell off the map of big-time American auto racing.”

It turned out that the SCCA’s failures were only a precursor to the ongoing struggles with managing technology and costs which have since roiled across Formula 1, Indycars, big-time sports car racing and most other forms of racing, even NASCAR. I have to ask, what lessons have we learned?