But for an illegal exhaust, this is the car that should have won Jaguar Le Mans 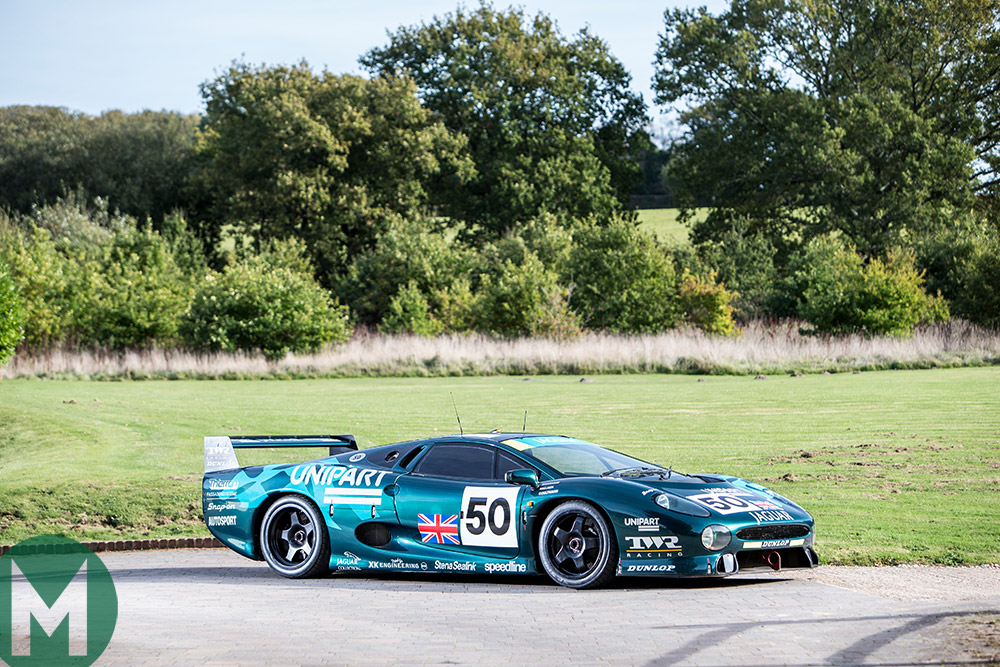 A car that finished 15th at Le Mans in 1993, slap bang in the midfield but first-in-class, going to auction wouldn’t normally raise much of an eyebrow. Or that much money.

But this is different. It was driven by David Coulthard, on his only Le Mans appearance, David Brabham and 1990 winner John Nielsen.

Coulthard, then busy making a name for himself on the single-seater ladder, found himself in the seat almost by accident.

“It was one of those things I ended up doing because there wasn’t anything else happening at the time. I couldn’t say I was passionate about Le Mans; it was only when I got on the podium at the end I realised just how big it was.

“Eddie Irvine’s Toyota passed me ridiculously closely on the straight; it just wasn’t necessary. I recall the door flapping in on the Jaguar and sitting there thinking ‘This isn’t much fun’.”

Brabham’s first start had come the year before with Toyota, while Nielsen’s run of Jaguar Le Mans starts – in XJRs 8 through 12 – had been broken by a stint in a Kremer Porsche 962CK6 in 1992 because Jaguar had pulled out of the flagging Group C.

The XJR-14 had been tucked away at the end of 1991 (only for it to later be revived to become a Porsche) and the 1992 Le Mans was the first without a Jaguar for almost a decade.

This, the XJ220 with its Metro 6R4-derived V6 engine from the IMSA XJR-10, was the car to take Jaguar back into competition with Porsche – only now in the new GT class. And Weissach wasn’t holding back: in the lead works 911 Turbo was Walter Röhrl, Hans-Joachim Stuck and Hurley Haywood.

The XJ220C was a product from the pen of Richard Owen, and, like many British Le Mans cars, it first hit the track at Snetterton. Like few others, it then went to Mallory Park, which was where Win Percy – who would drive one of the three works Le Mans entries – first drove it.

‘I hadn’t driven a pukka race version until we went to Mallory,’ he wrote in the June 1993 issue of Motor Sport. ‘I had seen it going round Snetterton with David Leslie and, frankly, none of us really liked what we saw about the stability of the car.’

Some hard work at Tom Walkinshaw’s eponymous team and good feedback from Leslie and Percy meant it went to Silverstone for a club GT race and claimed victory against modest opposition.

‘The XJ220C was lovely to drive at Silverstone,’ Percy continued. ‘On a flying lap, you pass the pits flat in top gear, fifth, and then you need a fairly heavy application of the brakes at around the 100-metre board before Copse. It’s deceptively quiet inside the car, but there’s a lot going on – Copse is a very quick corner.

‘I don’t think I ever really did enough Group C racing to say that I enjoyed it, but after short acquaintance, I get a really good feeling about the XJ220C.

So the car was well set for Le Mans, except it was thrown out of the first qualifying session for not running with a catalytic converter. The team appealed and raced under a cloud, only to be excluded from the race.  Not because of the lack of a cat, but because TWR hadn’t followed the correct appeal procedure.

David Brabham was caught in the middle of it all and denied a double family win.

“There was a lot of politics going on at the time,” he said in a podcast last year. “Tom, bless him, Tom Walkinshaw and the ACO hated each other so we were wrapped up in all of that mess. And, of course, there was other politics going on with Jaguar and Tom was a master at playing that kind of game.

“You know, on the weekend we had a win and my brother won overall, so from a family point of view we ended up having two firsts and it was a great moment.”

The three cars, new as they were, didn’t have the smoothest of weekends and only the ‘winner’ – this car being sold by Bonhams on Bond Street in December – was the only one to reach the flag.

Brabham, meanwhile, took the brunt of things – literally. “I had the car land on my foot when I was doing a pitstop practice. I was putting DC in the car, the rear wheel comes off and I’m putting him in so most of my foot’s underneath the car. And then the air jack pops off – bang, it’s right on my foot and I couldn’t move it. I mean it’s just squashed, pinned. They put it up and now I’ve run off taken my shoe off and put my foot under cold water.

“Two days later I got the race my foot’s ballooned and purple and I’m having to wear a running shoe, not a race shoe. It was so badly bruised, it was painful to walk on. It was my right foot and I wasn’t left-foot braking because the gearbox just doesn’t really allow you to do that. So I had to brake with my foot on the side to use a rubber, which wasn’t brilliant but I could still manage. It probably wasn’t able to do the maximum but it was enough.

“And then I had a fuel leak in the car as well. So I’m driving along during my stint, probably with four or five laps to go on my stint. I go ‘look, I’ve got a really strong smell of fuel’ and they said well just if you can’t keep going.

“So then my feet started to slip because the fuel started to run towards where my heels were in the pedal box. I’m getting on the radio and ’my feet are slipping, I’m gonna have to come in’ and they said: ‘so if you can get to the end of the stint that would really help us.’ OK…

“So I do the stint, come in and they pull it in into the garage. They’ve filled it up with fuel and they’re looking to see the leak. They found it and then they said ‘we found the leak but could you go out and do a few more laps while we decide what we want to do with it?’

As the Porsches faded, and the works car hit the wall, the other Jaguars retired. Brabham, Nielsen and Coulthard could afford to lose more than an hour chasing that fuel leak and still take the win.

“Of course, we didn’t know whether the car was going to make it to the end anyway,” according to Brabham. “It’s a shame for everybody who put the effort in, leading up to the event and during the event because it’s not just my victory; it’s everyone who worked on that programme’s victory. It was taken away from all of us.”