This year’s Ferrari 488 GTB uses a mid-mounted 3.9-litre V8. In that sense, it is traditional Ferrari fare. Not, however, if you were a devotee of the brand in the 1960s.

When the Dino appeared on the scene in ’68 with half the cylinder count of a ‘real’ Ferrari, eyebrows were raised. Up to that point, Maranello’s road car division produced full-fat, high-cholesterol V12s and very little else. If it didn’t have 12 pistons firing diagonally upwards, six on each bank, it probably wasn’t a Ferrari. However, the Dino sub-brand was created to sit under Ferrari and seen in that light its V6 made perfect sense – it was half the full recipe. 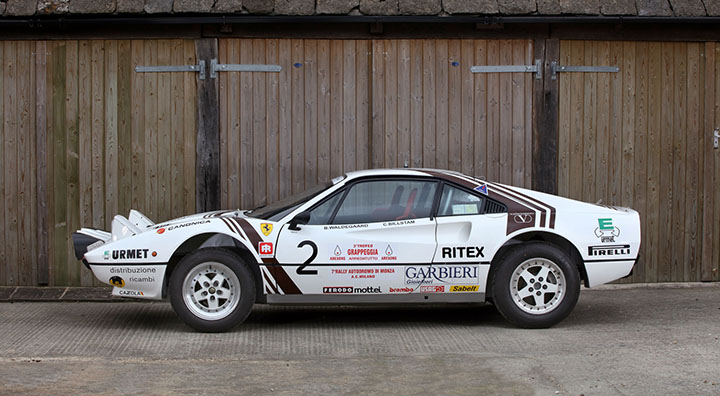 Then came the Ferrari 308 GTB. First manufactured in ’75, the Dino replacement featured eight cylinders. The decision had Ferrari loyalists scratching their heads. Although not the first Ferrari V8, it remained foreign territory for the marque. The new 488 finds itself in a similar quandary – Ferrari has used turbocharged engines before (and to great effect) yet the move still sits uneasily in some quarters. When a product is as loved as the naturally aspirated, mid-engined Ferrari, breaking convention will always generate disquiet.

In addition to its cylinder count, the 308 GTB proceeded to challenge another established norm. “Ferrari’s are for circuits, not stages,” said convention. “Not so”, replied dealership and race-prep specialist Michelotto. From the late ‘70s, the Padova-based outfit set about building and developing 308s for the world’s rally stages. Though Lancia, another Fiat brand, held the group’s official rallying mandate, Ferrari was happy to support Michelotto, even homologating a series of performance updates to bolster the effort. 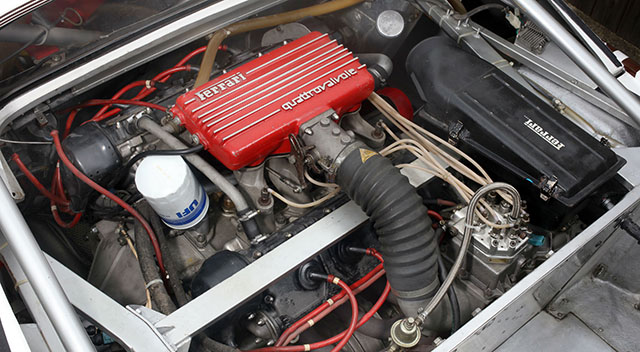 Michelotto builds were no vanity project either. The cars competed hard and successfully, particularly on European rallies with wins in Italy and Spain. Antonio Tognana even secured the ‘82 Italian Rally Championship using one, through he did switch to a Lancia 037 mid-campaign.

The car featured here is one of four Ferrari 308s produced to Group B specifications. Even in the rarified world of rallying Ferraris, this is an uncommon example. Like the earlier Group 4 versions, chassis number 18847 performed well on the continent. Angled by Luigi Battistolli and Claudio Berro through the northern roads of Biella’s ’84 della Lana rally, #18847 finished second to a Jolly Club 037.

Replicating its appearance from ’84, the car’s Valentino livery was reapplied to the lightweight bodywork during a light-touch service in 2010. Delve under the heavily slatted rear deck and more treats are revealed. Chassis 18847 is one of three Michelotto 308s fitted with the Quattrovavole V8. Generating over 300bhp in Michelotto trim, it’s a major contributor to this car’s performance. So too is the close-ratio gearbox and the extensive use of titanium employed throughout the car. Weighing little more than 1000kg this 308 will sling you between hairpins with significant shove.

It is also a remarkably original example. The Sabelt harness dates from ’83, the front-mounted fuel bag from ’84 and the fire extinguisher from ’86. Supplied from William I’Anson with a chunky history file and all the paperwork you’d expect for such a special car, #18847 is very collectible indeed. To cap it off, this Group B challenger is eligible for next year’s Tour Auto. The event finishes with a nighttime attack through classic rally stages in the hills above Côte d’Azur.

Imagine sitting at the start gate, revs raised and fog lights illuminating your forward view, ready to fire this historic Ferrari through Monaco’s hillside. Are there better ways to spend a night?