While the Alpine A110 Cup provides a salivating one-make series prospect, does the manufacturer have a GT4 variant in mind? 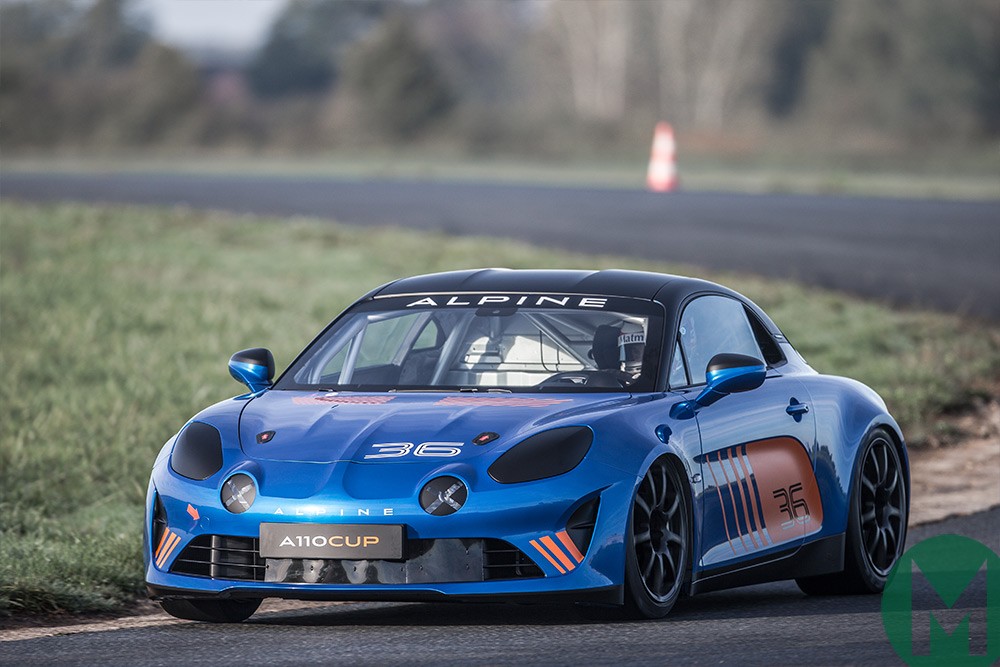 Five years after news of the project first came to light, Renault has finally let some journalists drive its new Alpine A110 mid-engined sports car. What it has not yet done is let alone behind the wheel of the gorgeous one make racer it has created to go with it.

Actually, it’s not Alpine that’s been responsible for its development, but its racing partner Signatech whose Alpine A460 won the LMP2 title in 2016. The race car appears to be very much as expected: when you’re competing against yourself there’s no need pull out all the stops to ensure the car is as competitive as possible, and, with cars like this, it’s often better to limit development and keep the prices down.

Even so, the A110 Cup will cost around £90,000, which is a lot when you consider the road car upon which it is based is likely to be priced around £50,000. For the extra 40 grand you get a car with an 18bhp engine upgrade to 266bhp, lowered, stiffened racing suspension, fully adjustable Ohlins dampers, a sequential race gearbox in place of the similarly paddle-operated double-clutch box used in the road car and a limited slip diff. Big racing brakes with six pot calipers are also fitted. The Cup naturally also has all the usual safety gear and a digital dashboard for easy access to important information.

It looks like a complete scream to drive and I like the fact that Alpine has not felt the need to tie it down with an enormous aero pack. I like too that there are classes for drivers both under 25 years old and over 45: it gives both novices and people like me, who are already over what was never a particularly steep hill, something to fight for. Some 20 cars will compete in 12 races at six venues including Silverstone, Hockenheim, Barcelona, Spa and Paul Ricard.

Is a one-make series the right way for Alpine to go? ‘To begin with, of course’ Alpine boss Michael van der Sande told me. ‘Alpine is probably most famous for rallying but not having a four-wheel drive hatchback, that avenue is not really open to us right now. But it’s incredibly important that from the very first year that Alpine is seen to be back in competition and we think the one-make series is exactly the right way to go.’

Even so, surely a GT4 car would not only enable Alpine to show it was not afraid to put itself up against some of the best in the world but also afford the opportunity for the revived brand to be seen as genuine competition for the likes of Porsche, Aston Martin and McLaren. Van de Sande paused before replying, long enough for a big grin to split his face. ‘That would be a good idea, wouldn’t it,’ he replied rather enigmatically. ‘With Balance of Performance it does provide an opportunity. We’d still be nowhere on the straights but under braking and through the corners… that would be interesting.’

I may be entirely wrong but I read this as a GT4-specification A110 being something of a slam-dunk certainty, but not until 2019 at the earliest.

As for the road car, I’ll be reviewing it fully in the March issue of the magazine (due out in early February) but for now I’ll share with you the fact that I worried about it quite a lot: we have seen before and rarely more so than with the Alpine’s most direct rival the Alfa Romeo 4C, that just getting the right ingredients is not enough. If they’re not correctly combined what results is at best a wasted opportunity, at worst a bitter disappointment. So I am pleased to report that Alpine knows some quite exceptional chefs…