Jonny Adam recalls the last laps of the 2017 Le Mans 24 Hours, as the Aston Martin Vantage closed in on the Corvette in front 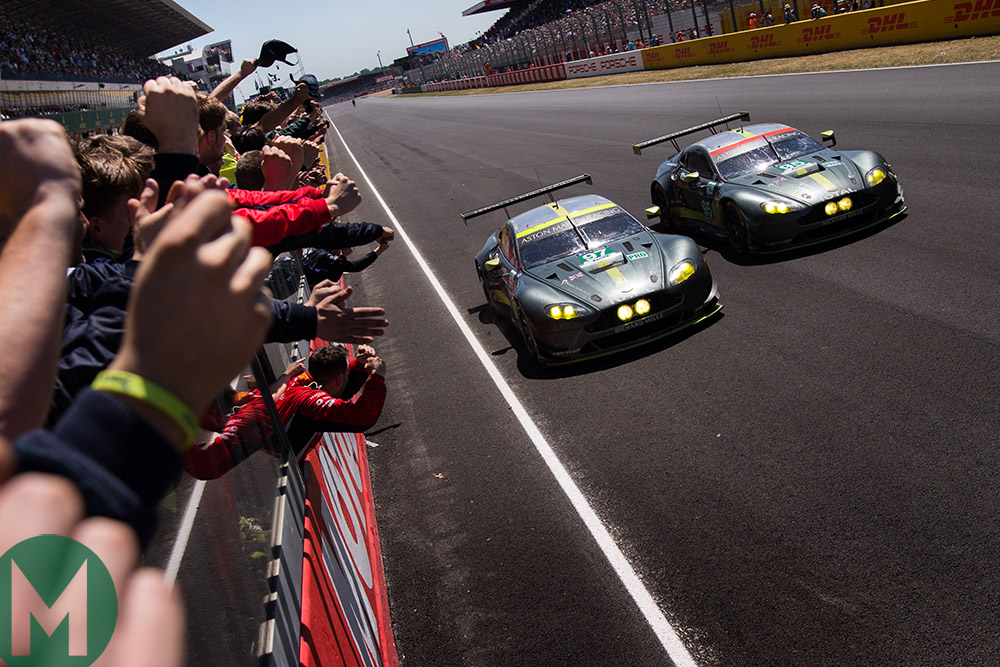 “The engineer said, when we released out of the pits: ‘the Corvette in front is for the Le Mans win’.”

Jonny Adam had 45 minutes to find his way past some American muscle.

It was the final Le Mans for the GTE-Pro Aston Martin Vantage, too. A car built from a base that was first introduced almost a decade previous. It was an old warhorse in battle with new cars, holding its own and, eventually, taking victory in the most dramatic of circumstances.

The Vantage already had a world championship trophy back at its Prodrive base in Banbury, but not the familiar Le Mans pot. In sweltering conditions, Adam, Darren Turner and Daniel Serra were about to put that right.

“It was weird,” Adam continues, “because I had been told two hours before the end of the race there was a chance of a podium – there was no talk of a win.

Adam would spend the entirety of the final stint within a second or two of Corvette driver Jordan Taylor, the gap between them waxing and waning in traffic.

“There was nothing between us in straightline speed, which made things difficult. It was a case of just seeing where the Corvette was weak. I wasn’t one for just sitting there; I don’t think any driver would when you have got that shot to win one of the biggest races in the world.”

As the laps ticked down, Taylor looked like he had done just enough to take his third major endurance race win of the year to add to his outright wins at Daytona and Sebring. In fact, he’d won every IMSA round of 2017 so far.

And Corvette was to defeat its friendly rival Aston once again.

Then Adam threw his Vantage down the inside of Arnage, bolting fans upright from the edge of their seats and onto their feet. “We made a tiny bit of contact.”

Adam locked up slightly, held his line down the inside, which forced Taylor slightly wide, and the pair bumped doorhandles and resumed battle along the Mulsanne.

“He then had a big gap of two and a half seconds. But the big turning point was his big lock-up into the first Mulsanne chicane. After that he was really struggling.

“I was straight on the radio saying he had cut across the chicane and gained an advantage, but straight away he was on the brakes so much earlier into Mulsanne because of the flat spot he had. It was game on then. As we went through Porsche Curves, right in his wheel tracks, I could literally see his tyre delaminate. So, as he loaded up through the final chicane I was able to get close and slingshot out.

“As I got by I thought, ‘is this the last corner of the race? Oh, one to go. One to go…’ It was only then that the engineer came on and said ‘Be safe. Don’t be stupid.’

“That crowd cheering? It was so loud I heard it in the car. For that to be so powerful to outweigh a normally-aspirated V8 is something I’ll never experience again.”

Make that two V8s, including the Corvette’s.

“It was flat chat all the way from then,” Adam adds.

Once past, a glance in his rear-view mirror gave him the nod to finally slow down and ease to victory.

“I’d seen my rear-gunner Nicki [Thiim] have a little move and the next minute the Corvette was off the road. I thought ‘where’s he gone?’ but he had skipped through the corner and still there.

“Then that last lap was the slowest, steadiest lap of the weekend. And to have another Aston directly behind? We couldn’t have scripted a better photo. It was just mega. Parking the car in parc fermé, walking down the pitlane, random mechanics were just saying ‘that was epic’.

“It meant a lot to everyone, especially [technical director] Dan Sayers. He designed and engineered the car and was almost in tears in the pitlane. It means that much. I’ve played the video a lot, but he plays it every day I think.”

A week later, crowds at the Goodwood Festival of Speed reaffirmed just how much it meant to those even outside the team.

“That was three days of the public just coming up to congratulate or just touch the car. Off the back of that, me and DT [Turner] have been doing a lot of dealer nights and they keep replaying the video because they waited so long and were just [in awe of] the way we did it.

“It might never happen like that again – the final year of the Vantage, on the final lap, and against the Corvette of all cars.”