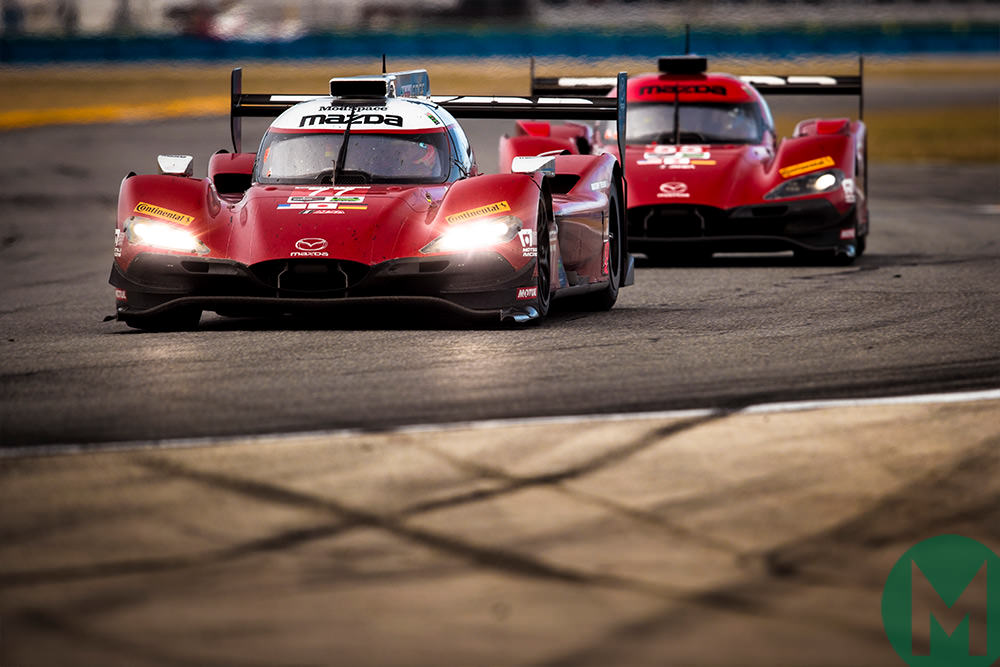 Now, I’m not fluent in French. In fact, at Le Mans last year my attempt to order ‘deux steak Americain’ was so successful I was given four beers and no burgers.

But, if the conversation between Gérard Neveu, CEO of the World Endurance Championship, and IndyCar champion Simon Pagenaud that I squeezed past at the weekend wasn’t about how good the Daytona Prototype international cars of IMSA are then I would be very surprised.

“If I see him here I will tell him!” Pagenaud had grinned five minutes earlier. So, if he’s a man of his word…

It’s probably something Neveu and Pierre Fillon, president of the ACO, heard a lot at the 24 Hours of Daytona because the appreciation of the DPis appears universal from drivers, teams, media and fans.

The cars themselves are built from the LMP2 chassis seen racing in the WEC and the European Le Mans Series with some key differences. The bodywork rules are open, meaning the Mazda RT24-P has been made to look a little like the Mazda MX-5 that was parked in the car park. The Cadillac DPi-VR was styled by Cadillac to resemble its V-Performance cars. Both were designed by the road car divisions and then tweaked for aero purposes.

So, to the casual fan, the cars are recognisable, on and off the road. It would be impossible to say the same about Toyota’s TS050 or Porsche’s 919, so DPi works perfectly for manufacturers in that respect. There’s also variety, visually, something that couldn’t have been said about prototypes in recent years. And in the Mazda’s case, they look stunning.

Beneath the restyled engine covers are engines that are similarly familiar. The Mazda is a four-cylinder turbo-charged two-litre, because it’s the biggest engine in its road car range (ineligible rotary aside). The Caddy’s original 6.2-litre was similar to the CTS-V engine (before it swapped in its 5.5-litre), the Acura is based on its J35, the Nissan is the GT-R Nismo’s V6. So there’s yet more brand relevance.

Balance of performance is a necessary evil, much to the drivers’ chagrin. But for the category to be successful it is needed, and it allows that little Mazda to fight fairly with the big American brutes.

For the drivers, the cars are seemingly right. “I’ve been very lucky,” said Pagenaud of Penske Acura, “I’ve driven every iteration of the Acura prototype and also the Peugeot LMP1. They were all beautiful cars, but this one? Every time I come in and get out I have a big smile on my face. It’s a very forgiving car, it doesn’t try to trick you. It’s intuitive and you can really attack. The more you push it, the more it wants you to push it.

“I’ve been calling it a mini Peugeot. It’s very similar in the cockpit, the feeling of it, the way it steers. Obviously it’s a different tyre and different engine but the V6 twin turbo delivers a lot of power right away.”

The Frenchman can also compare it to the regular LMP2 cars, having driven for Penske in a stock Oreca at Petit Le Mans last year. “That engine is quite different. It’s very peaky at the top end, whereas the Acura is all about bottom end. I’d much rather have the Acura because it has less vibration and it’s a lot more comfortable in a 24-hour race.

“It feels more stable, more racey, because of the aero. It’s not as edgy.”

All we can hope is that the ACO and WEC were listening. The WEC has proved it’s good at listening to the fans: bringing back Sebring and mixed-duration races is supposedly because the fans requested them. They probably didn’t request Silverstone to be dropped, but that was only a temporary brain fade.

What Neveu and Fillon also wouldn’t have failed to notice at Daytona was the presence of manufacturers and their money. Not just on the track but with hospitality units dotted around the circuit and the big car stands.

Toyota spent almost all of its money on its car instead of the marketing tents. Porsche’s presence may not be as diminished, with its GT cars present, but the lack of Audi was certainly noticeable.

John Doonan, Mazda’s head of North America, spoke openly about IMSA’s model being the right balance, allowing it go racing cost-effectively and allowing it to “spend additional dollars on marketing, activations and communications so we can tell the brand’s story to help build our road car sales and brand story globally.”

The word ‘dream’ was bandied about with any mention of Le Mans for the DPi drivers and team owners. But to do that, the ACO and WEC would need to bow to IMSA rules.

For Ralf Jüttner, managing director of Joest Racing, that looks unlikely at the minute. But if Toyota had followed Porsche out of LMP1 then the door would have been open – more on that in next month’s issue of Motor Sport. But he and Mazda want to go back and win again, this time together.

John Doonan admitted the ACO and FIA are making the right noises, now it’s a case of them acting. “They have done a great job communicating with all the manufacturers, sending out a survey to get our input. That’s something I’ve never seen in my career, Pierre Fillon, Gérard Neveu and Vincent Beaumesnil have actually asked for everyone’s opinion, it’s terrific. Motor sport is either part of marketing or R&D, it’s a great thing to be talking about.

“Hopefully they’ll make decisions based on the views that have come right from us. To be back there at Le Mans, we had 17 tries and won it – the whole nine yards. It would be awesome. We’re a global brand and it’s a global stage, but so is this [Daytona 24 Hours] now.”

“It would be great to race these cars all over the world,” added René Rast. Speaking, probably, for everyone.