There’s no particular order to our list of 100 reasons why we love Aston Martin. The point of our October issue cover-story tribute during this, the marque’s centenary year, was that its history is so rich, so diverse – and so gloriously patchy – it’s all worth celebrating: the good, the bad and even the ugly. 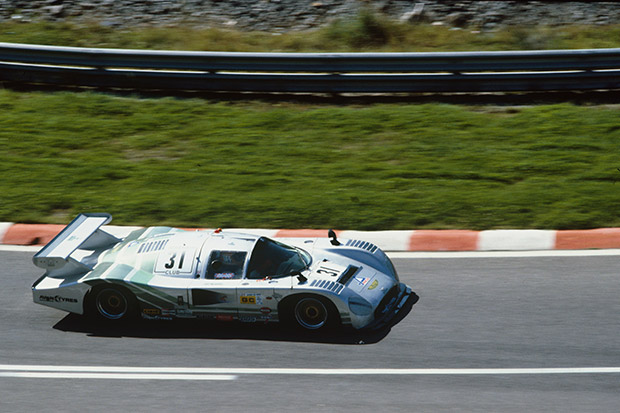 Aston Martin wouldn’t be Aston Martin without the lot. Lest we forget, it’s a miracle that the marque still exists at all, especially when so many of its contemporaries didn’t get past the 1950s.

So why did Aston Martin survive? Well, as our 18-page special suggests, perhaps it’s specifically because of those challenging troughs that pock-mark its 100 years. Perhaps they made AM stronger over time, endearing the brand and the badge to too many people who just point-blank wouldn’t let it die – just ask David Richards.

The low points made the (rarer) spikes, when Aston Martin soared to wondrous heights on the road and track, even sweeter. And for me, there is one particular spike I always come back to when thoughts turn to this particular car maker. Shot among admiring crowds at the recent Kensington Gardens celebration day in London, it was the obvious choice to grace our Aston cover. 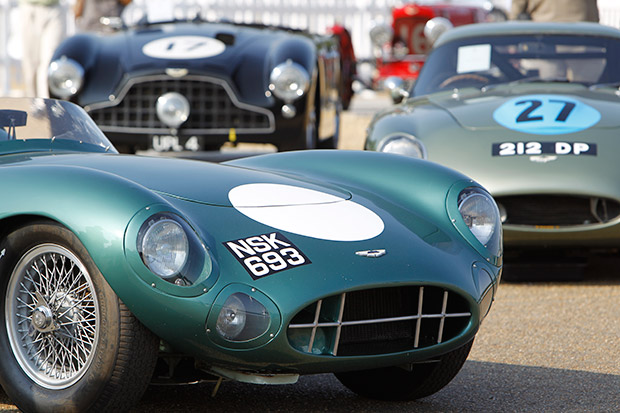 The Italian houses could do both elegant (Maserati) and brutal (Ferrari) better, and even back home in Blighty those feline rivals from Coventry were superior of line. But still there’s something special about the DBR1, from its perfectly weighted proportions to its curvaceous profile. More significantly, it could never be underestimated as a potent and very usable weapon over great distances in competition during its era.

For race fans, it will always be the ultimate Aston Martin – but not because of the 1959 Le Mans win, at least in my mind. Yes, victory at the 24 Hours was undoubtedly the most important sporting moment in AM’s history, an achievement upon which the modern brand still trades 54 years later.

Yes, that victory was scored because of the iron discipline of John Wyer, and tough-nut drivers Roy Salvadori and Carroll Shelby, who kept to The Plan – as the Ferraris wilted around them. 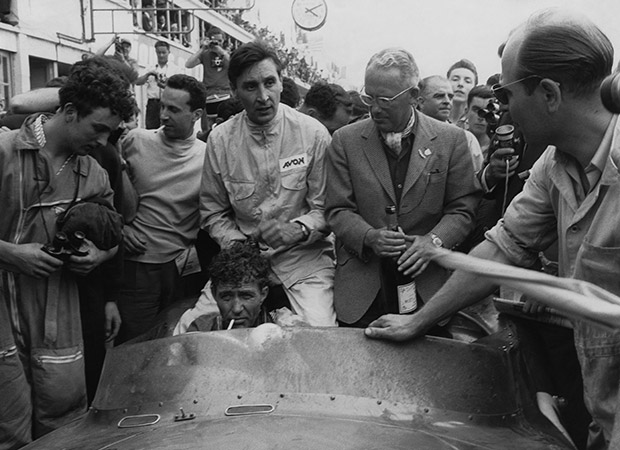 And yes, it was a monumental achievement with a high quota of ‘heroic’ thrown in: Shelby was ill throughout, ‘Salvo’ endured exhaust pipe burns to his feet through his lightweight boxing boots that scarred him for life.

Hard-earned? Oh yes. Deserved? Undoubtedly. But a win built on pure, outright speed? No. And anyway, those Le Mans-spec wheel spats on the rears spoilt the car’s deft lines.

Instead, it’s the Nürburgring that forms on my horizon when I think of the DBR1. And Stirling Moss, of course. Plus Jack Fairman’s biceps – number 53 on our list of 100 reasons.

The DBR1 had already claimed the Nürburgring 1000Kms in 1957, thanks to Tony Brooks who kept his cool as the wheels fell off Maserati’s challenge – literally in the case of Stirling’s 450S. But a year later the DBR1 was unstoppable once Moss got his hands on it. Thirty-six of 44 laps completed – it’s hard to think of Jack Brabham as inexperienced, but as team-mate on this day he barely got a look in – and a lap record broken by 6.9sec. In a Maser, Moss had conquered the ’Ring, and Fangio to boot, in ’56. Now he mastered it. 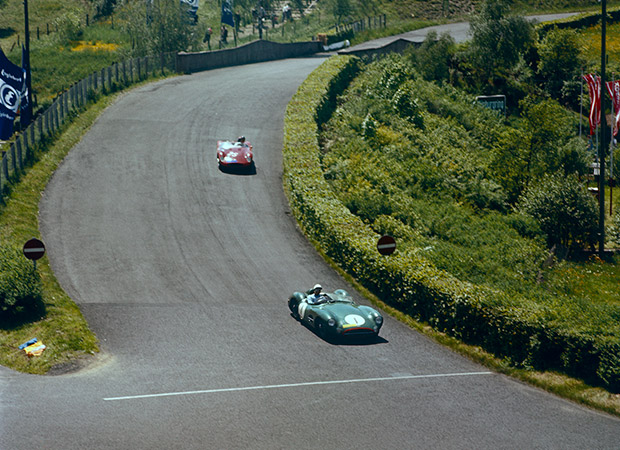 But the world had seen nothing yet. Moss saved the best for the Aston hat-trick, and a sports car performance that in its way was at least a match for his Mille Miglia victory. As he’s quick to admit, six hours around the Nordschleife took a lot more out of him than 10 around Italy.

In ’59, David Brown’s focus was turning to Formula 1. Given how the DBR4 programme turned out, it seems remarkable now that Stirling had to talk Wyer into a lone entry for the 1000Kms. He hand-picked reliable Fairman to join him, and it was a decision that almost cost him dear. But ultimately it would directly enhance the Moss legend.

Around the ’Ring, Stirling knew the DBR1 was “one of the most driveable cars that one could get”. He had no fear of taking on the full might of Ferrari, which boasted the talents of Brooks, Phil Hill, Olivier Gendebien, Dan Gurney, Cliff Allison and Jean Behra. And for good reason. 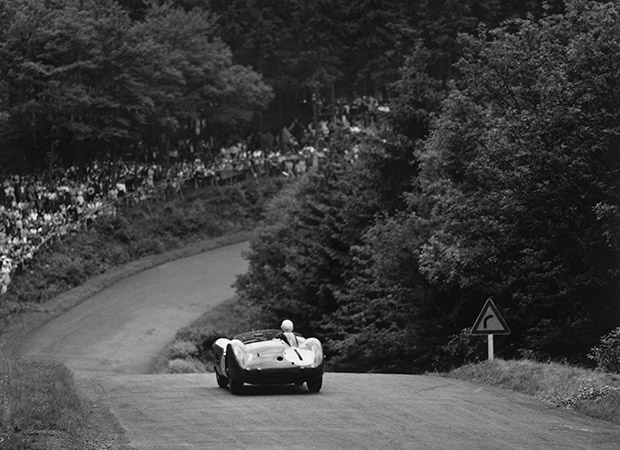 By the end of lap one, Moss held a 15-second lead over Gurney – which had stretched to 47sec by the end of lap five. In those first 17 laps, he broke his own lap record 16 times, improving his 1958 mark by 11sec. This was Moss at his most imperious. But then he handed over to Fairman.

On his sixth lap, ‘Jolly Jack’ blotted his reputation – and the very reason Moss had chosen him – by landing the DBR1 in a ditch on the approach to Brünnchen. But being the character he was, Fairman wasn’t about to accept his fate. Having first tried to lever the car out with the use of a fence post, he resorted to brute strength – and lifted the car out of the ditch! Just imagine that for a moment.

Stirling was packing up and preparing to head home when Fairman and the DBR1 showed up at the pits. Stirling hauled him out almost before the car had stopped moving and with nothing to lose, began to “enjoy himself”.

In his report for Motor Sport, Denis Jenkinson described it thus: “The way Moss closed on the Ferraris was quite fantastic and gave the impression that the Aston was a far superior car, whereas in fact it was the sheer brilliance of Moss that was doing it.” 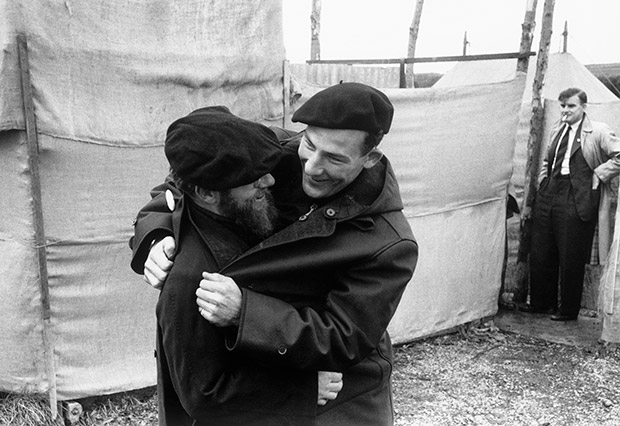 After 33 laps Moss was back in the lead – with an advantage of more than two and a half minutes.

Fairman jumped back in for a few laps, allowing Hill to re-take the lead in the Testa Rossa. But for a second time Stirling put in a comeback charge, passing Phil at Flugplatz. As in ’58, Moss completed 36 of the 44 laps, to win by 41sec.

There would be other great victories on the Nordschleife, of course, including his fourth, and third consecutive, 1000Kms win in a Birdcage Maserati in ’60, plus that Sharknose-killing Formula 1 victory a year later. But that day in the DBR1 was pure Moss theatre.

Le Mans would soon be conquered and the World Sportscar Championship would also follow. But for me, Moss and Fairman had already climbed Aston Martin’s sporting pinnacle at the ’Ring. As our list shows, there’s been much to revel in since, but in terms of pure performance and spirit nothing else comes close. 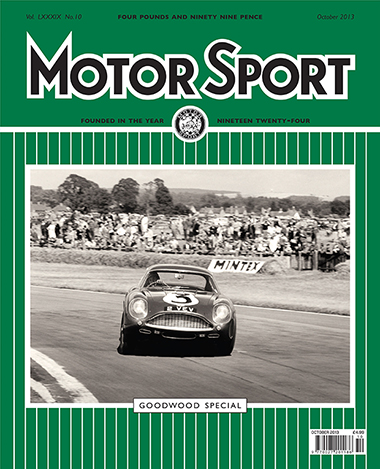 Our Aston special coincides with the build-up to the Goodwood Revival, which takes place on September 13-15. This year to get into the true spirit of the world’s favourite historic race meeting, we’ve produced a special limited edition ‘retro’ cover that will only be sold exclusively at Goodwood itself. Yes, the stripes are back, for one month only! These copies, which we hope will become collectors’ editions in years to come, will be available to buy from the fabulous Tesco ‘timewarp’ store in the trade area on the outside of the circuit. Fittingly, Jim Clark is pictured on the front, drifting an Aston Martin through Madgwick in the 1961 TT: a perfect image for our issue and the Revival’s tribute to the Scot on the occasion of his first world title’s 50th anniversary.

I’d also like to invite you to save the date for the Le Mans Classic on July 4/5 2014. Motor Sport is teaming up with our friends at Speed Chills once again, this time to offer special camping packages for the biennial historic racing bonanza. Following the success of our Speed Chills campsite at this year’s Le Mans 24 Hours, we’re planning a special cavalcade to the Classic to mark our own 90th anniversary in 2014. More details will be released in the coming weeks, but for now you can register your interest here and we’ll be in touch soon to tell you more.