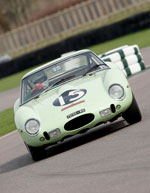 Were I to ask you to name the most desirable car ever built, what would you say? Your answer would of course be totally biased towards your own tastes: classic or modern, road car or racer. Where you’re from might be a factor and perhaps your age would play a part, too.

Polls aren’t really Motor Sport’s thing, but I’m hardly going out on a limb to predict that if we were to run one, Ferraris would feature heavily in the desirability stakes. And of those Ferraris, one in particular would be in with a shout to top the list.

The 250GTO matches performance with beauty like few other cars, both on the road and on the race track. Enzo’s masterpiece? By price alone, you’d have to say yes (this summer radio DJ Chris Evans is believed to have paid £12 million for one). But it’s about much more than money. You know what I mean, don’t you?

All 39 that were built (in two different body configurations) are special, but the one that graces Motor Sport’s cover this month is particularly memorable – partly because it’s that pasty shade of green!

Ahead of the Goodwood Revival, Andrew Frankel was lucky enough to achieve a lifetime’s ambition and plant himself behind the steering wheel of the newly-restored British Racing Partnership 250GTO, complete with its tartan nose strip. Chassis 3505GT will always be intrinsically linked to the Sussex circuit, thanks to Innes Ireland who used it to win the 1962 TT, Britain’s biggest sports car race back then. A fitting result, given that the man who should have been driving it had ended his career against the bank at St Mary’s earlier that spring.

To accompany the 250GTO in the October issue, dep ed Gordon Cruickshank tells the tale of the team, BRP, talking to the men behind the green, Ken Gregory and Tony Robinson. It’s a tale of corporate sponsorship, nervous breakdowns and jealousy, set against the backdrop of the team’s Chelsea home in Lots Road. Hang on, that’s where we’re based. I thought it sounded familiar…

In stark contrast to all this history, Nigel Roebuck talks to Robert Kubica and enjoys what he hears. When I first read this interview it occurred to me that Poland’s Formula 1 star is something of a throwback to eras past. His no-nonsense approach, deadpan acceptance of danger and pure love of driving would have made him a contender in any era. This guy deserves to add to his paltry tally of one GP win and once he is given a competitive car, he undoubtedly will.

‘Lunch with…’ is another corker this month, but I’m particularly biased. I was a junior reporter when gravel-voiced Irishman Martin Donnelly was establishing his single-seater team in Formula Vauxhall. I used to phone him every week for a gossip, but he was never my first call on a Monday morning. I’d have to make sure I had something juicy to tell him first. “Got any dirt ’n filth,” he’d rasp at me. If I didn’t, it would be a very short conversation.

I was at Druids when Donnelly won his very first Formula 3000 race, at Brands Hatch in 1988 following Johnny Herbert’s leg-shattering crash. In the sadness of that day, Martin’s victory was understandably overlooked, but it was clear even then that he was a contender for great things – only for his own horror crash two years later to rob him of all that promise. His story is inspiring – and despite the sadness, very funny.

I should probably also mention the BMW motorcycle test that appears in this issue, but given the ‘welcome’ our new road car section received last month, I do so with care! Two-wheel road tests won’t appear in every issue, but they will from time to time when we have an interesting story to tell. Lest we forget, Denis Jenkinson loved bikes as much as cars, and didn’t think twice when it came to writing about them in MS from time to time. We’re looking at the motorcycle world with the same appreciative and open-minded attitude.

Oh, and my vote for the most desirable car in history? Well, it’ll always be racing cars first for me. So I’ll go for the 1975 Ferrari 312T. What about you?