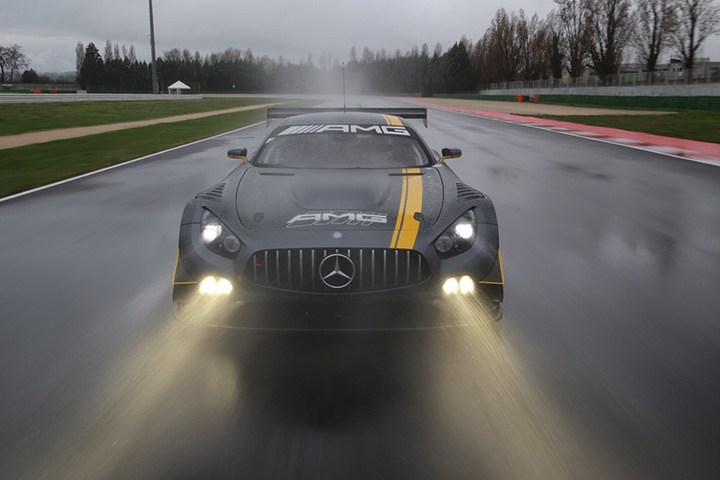 Ten years ago I went to Paul Ricard and had my first experience in what today you’d call a modern GT3 car. It is fair to say I found the experience pretty astonishing, not because the Aston Martin DBRS9 I drove was so wonderful but quite the reverse. Heavy, truculent, tricky and always, always hard work, every lap was a battle of wills and it was never entirely clear who would win. Probably being more kind than it deserved, I concluded, “It’s fun in a savage kind of way, but easy it ain’t”. Its cause had not been helped by the fact Aston had also let me drive the Le Mans specification DBR9 costing fully £300,000 more, which was predictably far faster but curiously, at least to me, massively easier to drive.

Spool forward until a date a couple of weeks ago, when I found myself strapping myself into the very latest GT3 car at Misano on the Adriatic coast. This should have been a far greater challenge: unlike Paul Ricard which I knew well, I’d never seen this track before and instead of clear blue skies, the drier parts of the track were wet, the rest simply flooded. Superficially this Mercedes AMG GT3 and that DBRS9 were conceptually similar: powered by normally aspirated engines of around 6 litres, putting similar sorts of power through the rear wheels of street-based designs clad in bewinged carbon-fibre bodywork. I should have been terrified.

And yet and to nobody’s greater surprise than mine, I felt quite relaxed as I was strapped in and shown around. One of the greater advances made by such cars over the last 10 years are the efforts now made to ensure their least-reliable component does not malfunction, in this case me. For a racing car, it’s easy to jump in and out of, even for a stiff-limbed middle-aged man. The driving position is superb and will accommodate everyone from a snake-hipped jockey to a 130kg, two-metre monster. A new Bosch display offers the clearest information I’ve seen in the car, and in such detail that it’ll not only flash lights at you to tell you the brakes are on the point of lock up, but different coloured lights to tell you which axle. All the knobs and dials and colour coded like educational kindergarten toys, and if you change the sensitivity of, say, the traction control or ABS through any one of 14 clicks on each dial, a big number will flash up in front of you so you know you’ve not twiddled in the wrong direction. Visibility all round is amazing for a GT sports car, the ventilation so good there’s no need for air conditioning – though this being Mercedes, it’s an option if you want it. 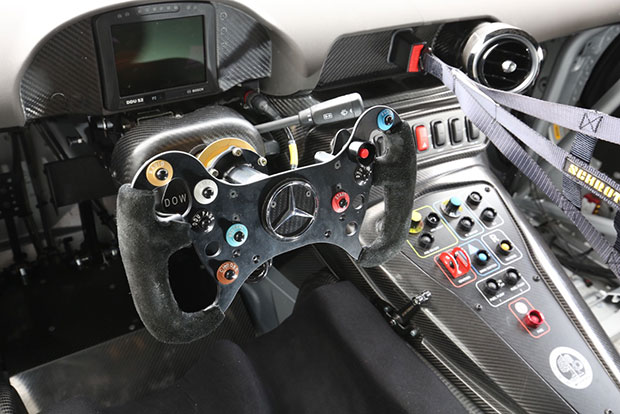 These days gearchanges are paddle operated and while there is a clutch, it’s there to get you out of the pits and nothing else. The 6.2-litre V8 booms into life and idles like a road car, albeit at ear splitting volume. AMG says it will go 20,000 racing kilometres before needing anything more than routine attention – back at its base it’s got one that’s done 50,000km and is still giving good power.

Out on the track only the flooded sections are difficult and we can’t blame the car for that. Maths will tell you the one thing that probably has not changed much in these last 10 years is straight-line speed: the Merc is restricted to around 550bhp and a 1285kg kerbweight, my notes from the DBRS9 say 500bhp and 1280kg. I’d bet the Aston had less drag and a higher top speed too.

Elsewhere, even in different conditions on a different track and with a 10-year break, it’s not hard to see where the progress has been made. Essentially this is a car that wants to work with you. It doesn’t complain on the way into a corner, it doesn’t misbehave on the way out. It feels sharper and more accurate than any still quite heavy front-engined design derived from a road car has a right, but that agility has not been achieved at the price of stability. It’s a genuinely easy car to drive fast even in the wet, and in quick corners the downforce is otherworldly. In short it feels like a racing car, not a street machine converted from road to track use with all the compromises that process inevitably entails. 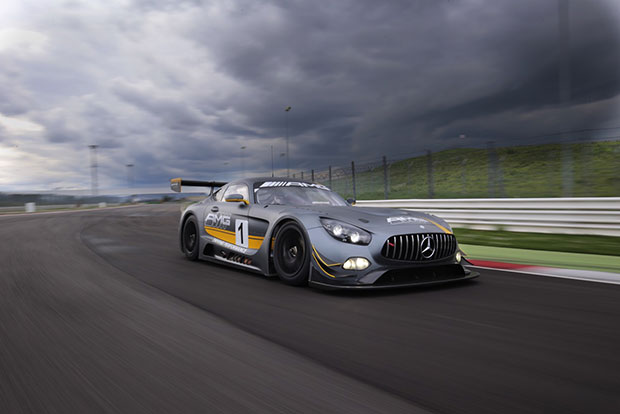 I guess it should be no surprise that a genre that has seen such extraordinary success over the last 10 years should also benefit from the money and technological progress made available in that time. Even so I still found fascinating the way a modern GT3 car could make someone with only limited experience of the breed feel so entirely at home in such alien surroundings. But of course that is the key to unlocking the maximum potential from amateur, ‘gentleman’ drivers and therefore, ultimately, making the car go faster. The pros may be happy to ride it out on a bucking bronco but if the rest are going to go as quick as they can, confidence is a far more important commodity than power or grip.

It follows too that if the gentleman drivers who have financed the boom in GT3 racing had not quickly been made more comfortable in their surroundings, they’d have tired of being scared every time they climbed aboard and gone off to find some other more enjoyable amusement. So the way these cars have been developed has not just made them quicker and easier to drive, it has secured their future too. At the end of the day, the customer is always right, and you need look no further than the massive business GT3 racing is now doing in almost every corner of the globe to know it.