Much has been made this week of Patrick Pilet and Nick Tandy’s achievement at Road Atlanta on Sunday. It was certainly unique.

The sight of a GT Porsche tracking down a Daytona Prototype in the rain and making a competitive pass was an unfamiliar one. Although GT cars have beaten their betters in the past, the challenge usually came from strong factory efforts against weak fields. But, as Gordon Kirby reported, the championship-winning Action Express car that Tandy deposed had completed all but one racing lap in 2015. These aren’t small-fry operations. 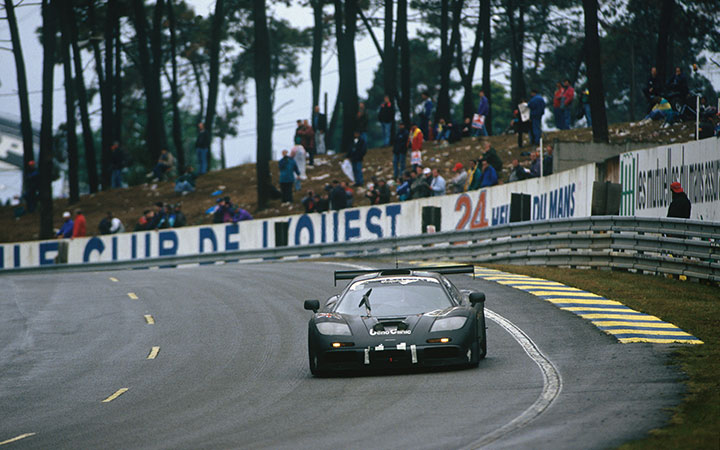 Twenty years ago, McLaren’s brand new F1 was carving out its own place in history by winning the Le Mans 24 Hours at its first attempt – and against some stiff competition. 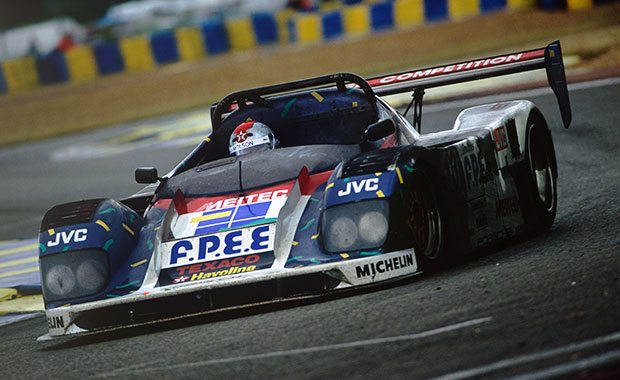 Sports car racing was languishing in a post-Group C malaise in the mid-90s. Most of the top-line talent that didn’t make it to F1 (or couldn’t stick there) was going to CART or touring cars, which between the myriad super touring championships and DTM/ITCC, accounted for a lot of drivers. There were factory contracts to be had, but not many in sports cars.

That’s not to say that there weren’t strong prototype teams at Le Mans that year. A pair of Courages were entered for Mario Andretti/Éric Hélary/Bob Wollek and Éric Bernard/Franck Lagorce/Henri Pescarolo; Kremer’s Porsche factory-supported K8s were in the hands of Christophe Bouchut/Thierry Boutsen/Hans-Joachim Stuck and Antônio Hermann de Azevedo/Franz Konrad/Jurgen Lässig.

The eventual McLaren success didn’t look particularly likely after qualifying. Behind the two fast-but-fragile WR-Peugeots at the front were the two Courages, a Kremer and then three Ferrari F40s. The McLarens were ninth, 11th, 12th, 13th, 14, 15th and 20th.

At the start of the race, the prototypes shot off into the distance, but the McLarens set a steady, quick pace. But bad weather, clumsy backmarkers, technical problems and some inspired driving from the GT set served to blur the picture. By midnight, McLarens were 1-2-3. 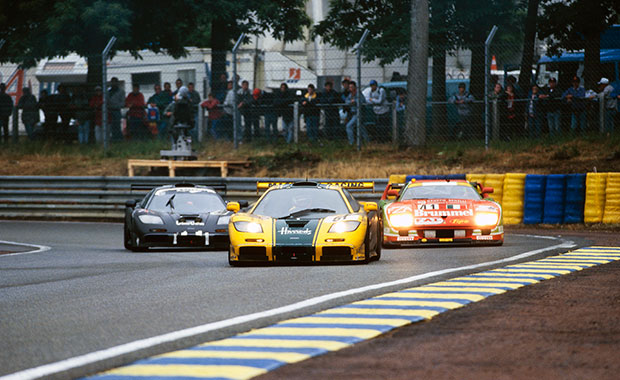 The David Price-entered F1 of Thomas Bscher/Jochen Mass/John Nielsen held the lead, despite running in the rain with a broken wiper. Price’s second entry, driven by Derek Bell/Justin Bell/Andy Wallace, was second, followed by rookie team Lanzante’s car with Yannick Dalmas/JJ Lehto/Masanori Sekiya. The highest-placed prototypes were in sixth, seventh and eighth.

The leading McLaren’s impressive run was ended by clutch failure and suddenly the until-now reliable cars’ chances seemed in doubt. The prototypes began to claw time back as clutches started to drag. In the closing stages of the race Wallace stalled on the way out of the pits, losing a huge chunk of time while the clutch fluid was bled and handing the lead to Dalmas. Andretti had been closing in the Courage and the McLaren’s time lost allowed him back onto the same lap as Wallace.

The Courage was capable of taking around 10 seconds per lap out of the McLarens and with Wallace struggling with his dodgy clutch, it was only a matter of time before Andretti took second place. But despite a splash-and-dash for Dalmas with half an hour to go, there just wasn’t enough time to catch the leading McLaren.

A lot of fans question the legitimacy of the McLaren F1 as a GT car, saying that it was basically a prototype in road car clothing. But Gordon Murray himself once told me how much that accusation irritates him and that if he’d put grooved tyres on the winning car, he could’ve legally driven it home from France. His only regret from that landmark weekend is that he didn’t. 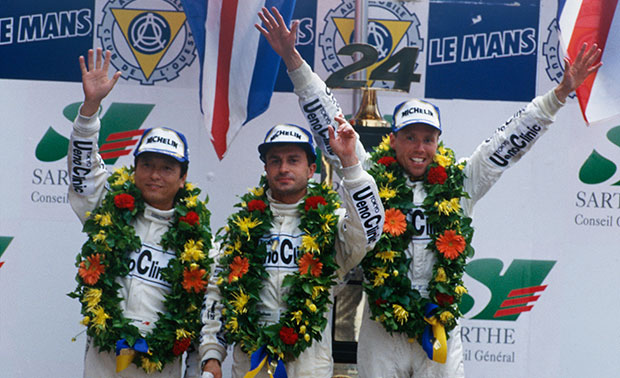 The McLaren’s performance in 1995 – in the BPR Global GT Series as well as Le Mans – sparked a resurgence in sports car racing, leading to the FIA GT series and the return of manufacturer-run prototypes. At the turn of the century, when touring cars and Indycars both suffered meltdowns, sports cars were ready to fill the void.

Tandy and Pilet’s Petit Le Mans victory won’t have that sort of effect, but it doesn’t need to. It’s just another highly enjoyable chapter in what will almost certainly go down as a golden era of sports car racing.