John Hugenholtz called me last week. The name will ring bells if you’ve been to the Zandvoort circuit in Holland. His father, also John, was circuit director at Zandvoort from 1949 to 1974. The track actually opened in 1948, the same year as Freddie March established the Goodwood circuit. It was quite a year – both places having a special place in the hearts of motor racing people, and both places still open for business. 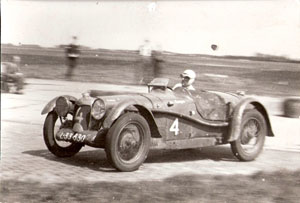 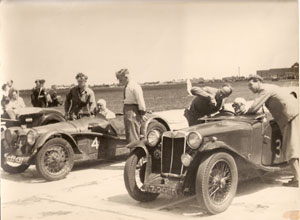 (He bought the Riley Brooklands from Dries van der Lof, who later raced an HWM in a Dutch GP, in 1942)

In case you’re wondering, Hugenholtz father and son were both named Hans at birth but are better known in racing circles as John. JH Jr still races his GT40. Got it? 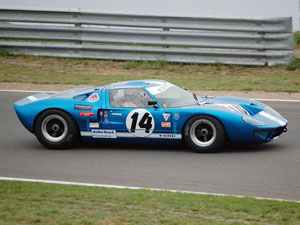 Anyway, there had already been a street race at Zandvoort in 1939 and the local Burgomaster convinced the Germans that they would need a parade ground to celebrate their certain victory… And they fell for it, the circuit’s foundations being laid for free by the Wehrmacht. The place we know today was designed by Sammy Davis, who used the natural contours of the sand dunes at what is now a holiday resort on the North Sea coast.

Hugenholtz Sr studied to be a lawyer and became a journalist by profession. But his passion was cars, in particular racing cars. And there are other parallels with Goodwood.

In 1936 Hugenholtz, a keen amateur bike racer, founded the Nederlands Auto Race Club in the same year as Freddie March held a hillclimb event for the Lancia Car Club in Goodwood Park, the first ever motor sport competition there. He won it of course, in his own Lancia Aprilia.

Hugenholtz Jr was born in 1950 and grew up at the home of the Dutch Grand Prix, allowing him access to all the secret testing that went on behind the dunes at Zandvoort. He also took lots of photographs – a boy with a camera didn’t bother anyone too much – and that’s the reason he called me last week. Having read my Mechanics’ Tale with Ray ‘Tex’ Rowe in Motor Sport (March issue), he dug out his photos of the day that Bruce tested the first McLaren Grand Prix car. Look out for them in the months to come. 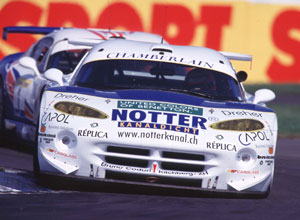 My correspondence with John Hugenholtz reminded me of my own boyhood at Goodwood. My father, too, was a lawyer, and his passion was for cars and motor racing. We lived just about a mile from the circuit and my earliest memories are of sitting in the Chicane grandstand with my parents. In fact I was there for the first meeting in September 1948 as this, apparently, was when my mother discovered that she was pregnant… which is about right as I joined the world in the summer of 1949.

As soon as I could totter around on my own, a third seat was booked in the grandstand, and right through until 1966 there we sat, always in the same seats at the Woodcote end of that old Chicane stand. Just as today, a smart enamel badge got us into the paddock. Later, as a teenager, I don’t think I was too impressed at having to wear a jacket and tie… 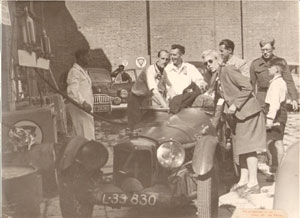 Like John Hugenholtz, I spent every moment of my spare time – and probably lots of exam revision time – watching testing at Goodwood. And taking photographs of secret new McLarens, Brabhams, Coopers, Hondas and the Ford GT which became the GT40. Perhaps my best ever day was when I finally plucked up the courage to ask if I could have a ride in the Can-Am McLaren. To my joy and amazement I found myself sitting alongside Denny Hulme for what are still the best laps of my life. No seat, no belts and 160mph down the Lavant Straight. A mile away my mother was blissfully unaware. 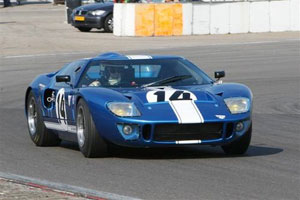 (Hugenholtz at Zandvoort in his own GT40)

Great car, great man and great memories. Mr Hugenholtz of Zandvoort and I shared this privilege – boys with access to a motor circuit. Couldn’t happen now, I guess. There’s all this ‘elf and safety’ for one thing.
Ah well, on we go into 2009. It’s still the most exciting, intoxicating sport in the world.