Radical Sportscars gave our staff photographer Lyndon McNeil the chance to become a racing driver in its SR1 Cup Championship. We follow his exploits. First up, the ARDS test. 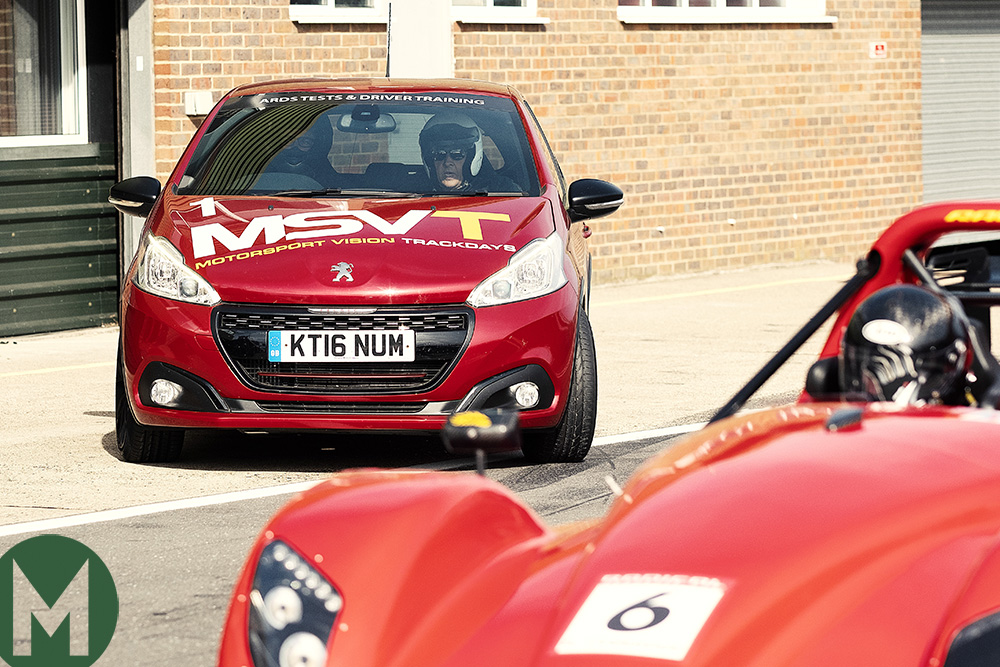 I first went to Snetterton when I was two, and it’s been a massive part of my life ever since.

It’s the place where I first saw and heard a racing car. The place where I was frozen and bored literally to tears. The place where I took my first photo, and in later years marshalled. So, when it came to picking the venue for my ARDS test, there was only one logical choice. Even if I’d just dropped myself in it by selecting one of the longest tracks in the country, and one of the most technical.

Regardless, there was work to be done even before I got to the track. First up was the relevant paperwork. Radical were amazingly helpful, arranging – as it does for all of its novices – the date of my test and helping me obtain my Go Racing Pack from the Motor Sports Association (now Motorsport UK). It costs a little more than £100 and includes all of the info you need to get started, with a DVD, a copy of the MSA Yearbook and the crucial licence application form.

Next step, arranging my medical. The MSA demands all new licence applicants have a medical examination and a doctor’s signature is required on the licence application form. It’s all done in just 10 minutes and, armed with a relatively clean bill of health, I was free to head back to Norfolk.

In typical racing novice fashion I arrive stupidly early, which means more time for the nerves to kick in. The pressure increases by the fact I had my friend Chris Haddon doing the camerawork, with me being the subject for once, and by the fact my dad’s turned up to watch! Clearly it constituted a family outing in Norfolk…

The test itself is broken up into two parts, theory and practical. I’d studied the Go Racing DVD numerous times before the test to refresh myself of the racing rules, especially the flag signals, which have changed since I used to marshal.

First up, the dreaded written test. Heading into the examination room there are three other applicants, all of whom have been out on track at some point during the morning practising. We’re asked whether any of us have done anything like this before and, sure enough, mine is the only hand that stays down. One has raced before and his licence has simply lapsed, and the other two have done multiple track days. I’m well behind the curve already.

We’re shown the Go Racing DVD again as a final refresher before the papers are divvied out, and the test opens with a series of questions about what each flag means. And then we’re into a series of scenario questions, each with multiple choice answers. And here’s the first stumbling block.

The question reads: ‘there’s a hazard ahead, what sort of flag would you expect to see waved?’ Easy, stationary yellow. Oh, hang on, waved yellow. Double waved yellow? That’s one of the changes since I was last on the posts…

And so to the track. Snetterton’s owner MotorSport Vision is one of the country’s leading ARDS testers, so I know I’m in good hands. My car for the assessment is a little Peugeot 208 GTi, too small to be intimidating, but with just enough poke to be at home on a circuit.

My instructor for the day drives first to show me the lines. A lap of the Snetterton 300 Circuit is a long tour – 300 signifies its three miles in length – and trying to take in the car placement and braking points through all 12 turns takes all of my concentration. Then it’s my turn to drive, with three laps of tuition. He coaches me throughout and I’m gaining confidence with each corner. I even nail the turn-in for Riches, where I once binned my mate’s XR3i on my sole other track day experience many years ago.

I’m just getting into the swing of things when I’m told to pit. The car stops and I know this is it. I have to go out and drive a handful of laps with zero help. And not cock it up.

I’m about to try and become a certified racing driver.

But just as I pull away, a Radical breezes past on its way out – coincidence, or like dangling a carrot?

Either way I opt to wait a few seconds to let it go.

The silence jangles my nerves as I wait to venture out onto the circuit, and it’s at this point that tensions make you second-guess yourself.

Through turn one I’m convinced I’ve already messed it up. Would that be held against me? It’s only an out-lap. Does that matter? Did I really mess up that yellow flag question?

I complete my first few laps, and then come the first words from the passenger seat: “I want you to do one more.”

Is that a good thing or a bad thing? I keep going and spy my dad on the pitwall, watching intently.

Just don’t cock it up, I tell myself. Not now.

I spy a white Caterham right up my backside as I’m about to go into turn one. ‘I can’t let him by now, overtaking on the straights only’ I think, just stay calm and remember the rules.

I expect the Caterham to fly past on the run down the infield straight out of turn three, but it backs off and stays behind me, like a distracting ghost in the mirrors.

It speeds up behind me entering the Bomb Hole, but again I can’t let him past as the rest of the lap is one long corner. I carry decent speed around Coram, the long right-hander before the final chicane, when I get the call: “Box now”.

Had I done enough?

Back in the pits, my instructor turns to me and says, deadpan: “What was behind you that last lap?”

“A white Caterham,” I reply.

“Because I was always in a corner…”

The relief is huge, the sense of elation at fulfilling a dream even greater. I jump from the car in celebration.

All that build-up, for a test that lasts barely half an hour. But the sense of achievement is huge. But what about that yellow flag answer? Turns out I also got 100 per cent on the written test to boot.

A few weeks later when that recorded delivery envelope from the MSA drops through your door is when it becomes real. All that work for a little plastic card.

But that plastic card – complete with dodgy photo – brings with it such excitement, such opportunity, and more than a few nerves. Now my life as a racing driver begins.

Next stop Donington Park, and the Radical SR1.