Part four of our photographer Lyndon McNeil is getting to fulfil his dream of going racing in the Radical SR1 Cup. The pre-event test… 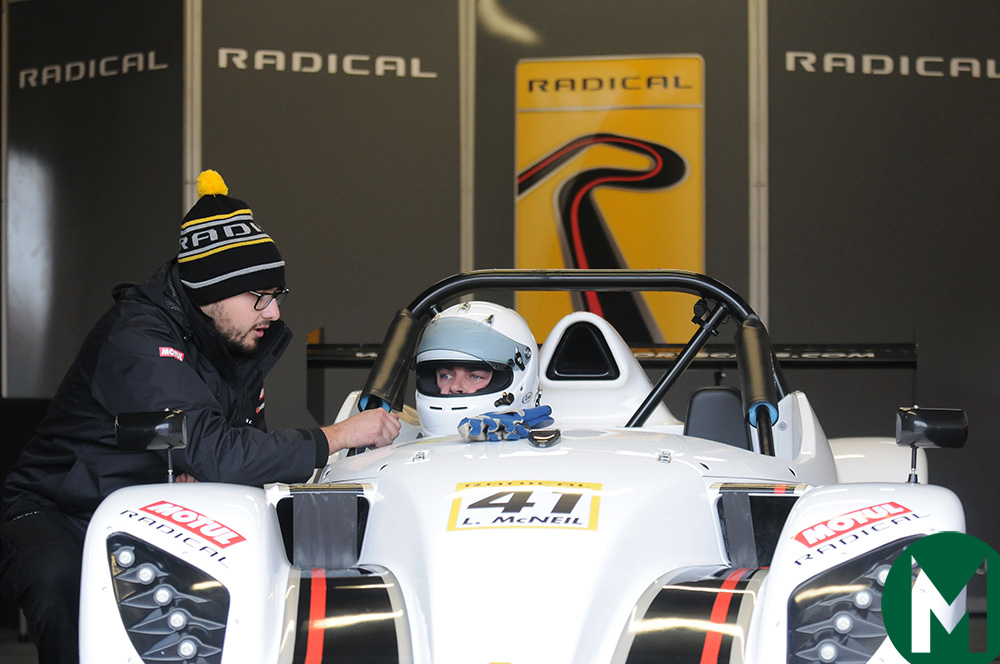 Just when you’re beginning to think you know it all, British motor sport has a funny way of throwing you a curve ball. The Friday test at Brands Hatch brings a whole new element for me to deal with: rain.

The forecast for the entire weekend looks less than ideal for a racing debut at the wheel of an 180bhp sports prototype, but at least I’ll experience track driving at its trickiest.

Driving to the circuit the nerves kicked in, but thanks to the work I’d done at iZone I feel calm and in control of what was about to happen.

I have a mental circuit map and I’ve done my preparation with the key words and visualisation laps. I honestly feel I know the circuit pretty well before I even turn a wheel on it.

However, the dry running in the simulator didn’t prepare me for the challenges of a soaking wet track. Having never even driven Brands in the dry, the wet is a whole new dimension. I’m nervous ahead of my first run.

My race coach for the weekend this time is Roger Bromiley, who’s won pretty much everything there is to win in these Radicals.

Related: How to go racing: Using a simulator

He begins by giving me a briefing about using the wet, or karting, line and instructions to stay a few feet from most apexes and – in the case of both Druids and Clearways – to look for extra grip around the outside of the corner and stay off the polished, slippery, racing line.

My first laps are very tentative. I’m not pushing hard enough to get heat into the Hankook wet tyres, or get the car’s aero working properly to provide me with enough grip. But I’m at least getting a feel for the car sliding, which is quite comforting as after a few early spins I at least know where the limit is. It provides more progressive feedback, rather than biting.

Being smooth on the throttle is key. In the full wet the SR1 can spin its rear wheels easily, giving you a big slide to react to with a handful of opposite lock if you get too eager.

After my first run Roger brings me in for a debrief. And it’s a totally different situation to that of Donington. On the first test the debriefs were limited to myself and Stuart Moseley. But here, on a full official test, I’m joined by Radical Works Team team-mates Ryan Harper-Ellam (a multiple race winner this year who is chasing the title), ‘Rookie title’ hopeful Chris Sharp and fellow newcomer Mackenzie Walker – who was just straight quick!

Everybody’s data is laid out on the big screen for us all to see what each other was doing in turn. Seeing the crossover in driving styles, lines and also the difference in skill really helps me understand where my time is being lost.

Nothing marks out a technique better than being shown the right and the wrong way side by side. You can see the gaps, and Roger explains what causes each one.

I’m too soft on the brakes, again, but more crucially I’m not getting to full throttle around the lap – at all. The Radical RPE engine (a Suzuki Hyabusa) loves to rev, and the car reacts best when the taps are fully open and the bodywork is generating the most downforce and the tyres are at their grippiest.

These points are drummed into me as Roger proves his point via the data traces and suggests an alternative approach.

Run two then, and the track has developed a bit of a dry line, so I go out and immediately knock five second off on lap two. Things are starting to flow.

Related:  How to go racing: The first test

As I’m reaching nearly 180kph toward Paddock Hill Bend I have iZone coach Neil Riddiford’s words in my head, “Look up!” and then Roger’s “Amazing things happen when you actually press the accelerator. So get on it!”

The revs rise and the SR1 feels like a dream as it carries me down the steep hill, through the depression on the exit and seamlessly up toward Druids. It’s insanely satisfying, and highly addictive.

The data even said I was 1.8mph quicker than time-topper Harper-Ellam through the corner. Never mind that he was five seconds up the road from me overall, I’ll take that small victory!

Annoyingly the lunch break brings more rain, and my hopes of experiencing a fully dry Brands Indy are dashed, but it’s a chance to get even more experience in the wet. The car again feels lovely as I experiment with lines and get comfortable with the throttle, brake and steering response in tricky conditions.

My times aren’t stellar, and there’s a fair bit of self- and car-preservation going on as I see a few others – including two of my team-mates – hit trouble (and the barrier) when pushing the envelope that bit too far.

Fortunately Radical build these cars strong, so not only is everybody fine but they’re back out later that afternoon.

The day finishes and I bring the car back without a scratch on it – aside from my Radical nose badge going walkabouts during my third run. Must’ve been the blistering pace… ahem…

Overall, I’m happy, and learning more about the car with each session. But I’m keenly aware that racing will be a whole different experience again. Let’s see what race day brings.