Last week I enjoyed a long chat with Jim Hall, the creator of the legendary Chaparral Can-Am (below with Jim driving) and long-distance sports cars from the sixties. Those cars were at the vanguard of the aerodynamic revolution as Hall pioneered the use of high-mounted, driver-controlled wings and rolled out the world’s first, skirted ground-effect car, the Chaparral 2H, in 1970. Hall and his cars won many American sports car races in the mid-sixties and also scored a handful of world championship sports car victories at Sebring, the Nürburgring and Brands Hatch. 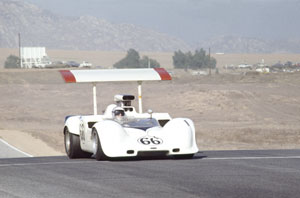 I wanted to talk to Hall for a book project I’m working on and also for an upcoming column in Motor Sport. The tall Texan has many tales to tell and plenty of strong opinions, too. We covered a lot of ground but I was amazed when he told me that none of the Chaparrals ever saw the inside of a wind tunnel. Back in those days most race teams had nothing like the sponsorship and technical resources we’re familiar with today, nor were there any wind tunnels with rolling roads or ground planes designed specifically for ground-effect aero development. Hall explained the very basic method he used to calibrate the downforce generated by his Chaparrals. 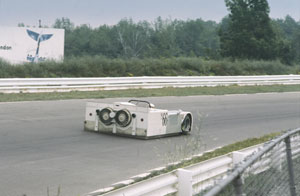 “We started rudimentarily measuring downforce back in ‘64 when I figured out that I needed to fix the nose on the first mid-engined Chaparral,” Hall recounted. “We measured downforce with a cable and a chart measured off the suspension so that we knew what the lift or downforce was on the car. We just measured it with a pencil that ran across a piece of paper. We did that for a long time and it was easy to set that up and run it, even on the 2K Indy car we ran in 1979-’81. We did that a little in Texas before we took it anywhere so we had a pretty good idea of what the downforce was. 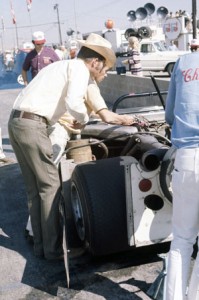 “We calibrated the suspension by just rolling the car out and putting weights on it so we knew what load it took to move the car up and down. We had a cable drive that drove a pencil and a roll of paper that was run by a little motor so you could set your zero point. You would go out and make a run and push a button and make a mark across the paper so we knew what the front and rear downforce was. You could run a couple of different speeds and then you could put it on a graph. You knew that it was increasing as the square of the speed so you knew what the curve looked like and you pretty much had the downforce over a speed range. That was pretty simple to do.”

Hall’s method of measuring the air pressure or downforce on the surface of his car’s wings or bodywork was equally simple in concept. “The other thing we did was when we needed to change the surface we had a manometer that was just a bunch of u-tubes made out of tigon tubing and full of coloured water,” Hall related. “If you were in a sports car you put it in the seat beside you and then went out and tapped a bunch of holes in the. You ran these to one side of the tubes and ran the other one to a pitot tube so you could get the dynamic air pressure on the surface. 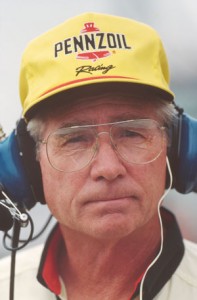 “I originally did it with a Polaroid camera. I had a Polaroid camera mounted on the dash and the manometer mounted on the seat back beside me. I didn’t even have a pitot tube for a static pressure source. I read in a book somewhere that a guy in WWI thought about doing this. The way he thought about doing it was you took a thermos bottle and put a piece of tubing in it and right before you made the test you opened it up then closed it so you had static air pressure in it. Then you went out to make your run and compared it to the pressures you got, then opened it and made sure it didn’t change.

“In a matter of about twenty minutes that thermos bottle would maintain an even enough temperature that the pressure wouldn’t change much. So you had some static pressure while you were sitting in the pit and you also had static pressure when you were going down the straightaway. It’s simple-minded, but pretty tricky! And that’s the way we started. 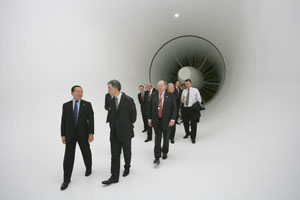 Thus began the serious science of racing car aerodynamics. Of course, Hall had no idea about the depth of the pandora’s box he was opening but he is without doubt the father of the modern aerodynamically-driven racing car. (Above – Honda’s latest wind tunnel).