“It’s coming… it’s coming,” says an excited Nicolas Lapierre. Like everyone in sports car racing right now, the Frenchman is champing at the bit for the fresh new era that is shining like a welcome beacon on the horizon. The dawning of the Le Mans Daytona hybrid category in 2022, running in parallel with the new Hypercars that will take their bow this year, promises an explosion of opportunity, interest and, most importantly, real competition at the pinnacle of endurance racing.

We won’t have seen anything like it since the high-tech glory days of the original hybrid era when Porsche, Audi and Toyota went to war in the World Endurance Championship between 2014 and 2017. But what is coming has the promise to not only top those years, but even echo the halcyon Group C era of the 1980s. Heady stuff – and it’s not even over-hype.

“The time we had with Porsche, Toyota and Audi was spectacular in terms of technology,” says Lapierre, who experienced LMP1 with ORECA’s Peugeot 908 HDi FAP in 2010 and ’11, before racing for the Toyota squad from 2012-14 and again in 2017. “It was crazy at the beginning of the hybrid era and the manufacturers were investing a massive amount of money. It was way too much, but it was super-interesting and I’m happy I was there because the fighting was tremendous, with different [variations of] systems. But it could not last because it was too expensive.

“Then we had this transition where everyone was waiting: what could we do to find some kind of battle like this but for a cheaper price? It took a bit of time, but now here we are. What matters most is we will have a good battle and this is what we’ll have with LMDh.”

“LMDh is going crazy, there are a lot of manufacturers interested”

Lapierre could be forgiven for thinking he’d missed his chance of claiming his personal grail: an overall win at the Le Mans 24 Hours (his best result to date is third, with Toyota in 2014). Like many of his contemporaries, a lack of opportunity in the top class has forced the 36-year-old to fall back on the secondary LMP2 division – although he’s more than made the best of it, scoring a remarkable four consecutive class wins at Le Mans, sandwiching his short-lived return to Toyota in ’17.

But now the LMDh/Hypercar era offers Lapierre a fresh chance – and to make a novel bid to win Le Mans not only as a driver, but as a team owner, too.

A reorganisation of the Swiss COOL Racing team, with whom Lapierre raced at Le Mans last year, means he is now fully at the helm of LMP operations, sharing overall responsibility with his team-mate and businessman Alexandre Coigny. The pair have formed CLX Motorsport to oversee the trackside and day-to-day running of programmes from a new base in Annecy, France. Lapierre is busy finalising plans for 2021 right now, fielding a high number of calls from “curious” drivers, engineers and mechanics, but naturally he’s casting a beady eye on future ambitions to win Le Mans as a player/manager.

“That would be something very special, I’m not sure anyone has ever done it,” he says. “Of course, we are super-far from this, we want to go step by step. But it is somewhere in our heads, for sure. We have to dream big.”

For this season, Lapierre, Coigny and Antonin Borga will step down from the WEC to fight for the new Pro-Am honours in the European Le Mans Series in their ORECA 07. In addition, the team will once again field two Ligier JS P320s in the Michelin Le Mans Cup, as well as a Ligier JS2 R in the Ligier European Series. No wonder he’s flat out.

But COOL Racing is not Lapierre’s sole focus in 2021 – because he reveals he has his own driver deal for the WEC and Le Mans this coming June (or potentially September, if the 24 Hours is again forced to run later because of the pandemic). 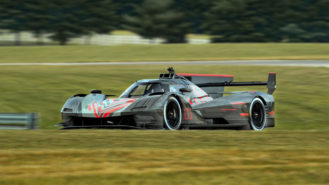 New-generation LMDh cars can race at Le Mans and Daytona; in WEC and IMSA series. Here's the latest on the rules, specs and team entries, including confirmed and rumoured manufacturers

When asked why COOL Racing has chosen the ELMS over the WEC this year, Lapierre says: “Basically I’m going to be involved as a driver with another team in the WEC this year, so it was going to be tricky for me to do both. To have my team on the track and racing with another would have been complicated. Alex wanted me to do Le Mans with him this year but I couldn’t, so we decided it was probably best to wait for one year while I do WEC with someone else. In my head, it is better to be free as a driver rather than thinking about my team running on the side, to be sure I can deliver on the track.”

He stops short of saying who he’s signed for, but it’s not going to be another LMP2 squad. So presumably the top class? “Probably!” he says with a laugh. “It’s a good project.”

Toyota announces its Hypercar line-up on Friday, but another return to the Japanese manufacturer seems unlikely. Instead, our money is on Lapierre joining Alpine in its ‘grandfathered’ LMP1 Rebellion squad, given that he also has previous form with the French brand, having won the LMP2 class at Le Mans with Signatech Alpine in 2018 and ’19.

As his new deal indicates, Lapierre is far too young to stop driving and concentrate on team management. “Especially right now,” he says. “The endurance world is getting crazy and there is a lot of interest in the top class, which is fantastic. The last few years I was so sad seeing only one manufacturer – Toyota – racing and winning at Le Mans. It was sad for the fans, for the drivers, for everybody.

“The LMP2 category was really crowded with amazing drivers – people like [Jean-Eric] Vergne and [Antonio Felix] da Costa, and the likes of [Juan Pablo] Montoya coming to LMP2. But we knew we were not fighting for the overall win. Now it is back to normal that manufacturers are coming with big numbers of cars and there will be a lot of professional driver seats available, which is the best news ever.

“So of course I want to keep active. I know I’m not the youngest one any more, but I also know I have good experience, which is quite important in endurance racing. I want to stay active for a few more years. And if I can do it together with COOL Racing it would be fantastic.”

What’s really capturing the imagination of everyone right now is the prospect of incoming manufacturers selling customer cars, certainly in LMDh but possibly in Hypercar, too. That will allow privateers a genuine shot at beating the factories and winning WEC rounds and Le Mans overall – as long as genuine equality is guaranteed, which it should be given Balance of Performance and the standardisation of the LMDh hybrid system, electronics and gearboxes.

“It’s very exciting, especially for a team like ours,” says Lapierre. “When we pushed the green button a few weeks ago it was super-scary because right now there are big question marks everywhere [thanks to Covid] and we don’t know whether we can travel. It was very risky to say we will go for it with a lot of investment because we can’t ensure the races are going to happen and the world is moving very fast right now with this health crisis.

“On the other hand, LMDh is going crazy, there are a lot of manufacturers interested, four are confirmed now [Audi and Porsche in LMDh, Toyota and Peugeot in Hypercar] and they are also open to selling cars to customers. If we don’t start now the team will not be ready in two or three years to take this challenge. If there is an opportunity we have to start now to build up this team in the next couple of years and try to be ready. Of course, it’s scary but I had to take the shot.”

Lapierre’s enthusiasm is infectious – and he’s far from alone in feeling so upbeat. Top-line sports car racing has drifted into the doldrums in recent years, but following what Nicolas admits will be a “transitional” year in 2021, a fresh wind is about to blow through its sails. Brace yourselves. It’s going to be a great ride.