Aston Martin Racing driver Allan Simonsen has died after crashing on the third lap of the Le Mans 24 Hours. 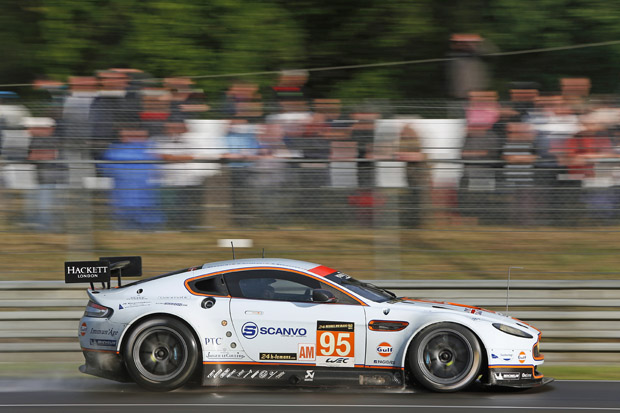 The Dane, 34, was leading the GTE-Am class in his Vantage when the car snapped sideways on the exit of Tertre Rouge and slammed into the steel barrier on the outside of the circuit. It then rebounded into the middle of the track where it came to rest.

The ensuing safety car period lasted for nearly an hour as track workers replaced a length of barrier, which was destroyed in the impact.

A statement from the team read: “It is with great shock and sadness that the Aston Martin Racing Team confirms that an accident occurred shortly after the start of the 24 Hours of Le Mans at around 1509hrs CET today when the No 95 Vantage GTE driven by Allan Simonsen left the track at Tertre Rouge.

“Tragically, and despite the best efforts of the emergency services in attendance, Allan’s injuries proved fatal.”

AMR managing director John Gaw said: “On behalf of all of us at Aston Martin Racing, I would like to extend our deepest sympathies and condolences to the individuals, and families whose friends or loved ones were involved in today’s terrible tragedy.”

The cause of the accident is not yet known.

The ACO also released a statement. “The driver was immediately attended on the scene by the doctors from the Automobile Club de l’Ouest’s Medical Service,” it read. “In a serious condition, Allan Simonsen was transferred immediately to the Circuit Medical Centre where he died soon after due to his injuries.”