It’s been 40 years since Derek Bell took the first of his five victories at Le Mans in the Mirage-Ford GR8 run by John Wyer and sponsored by Gulf. This was also the first time he had shared a car with Jacky Ickx, a partnership that brought both men such huge success in the years that followed. 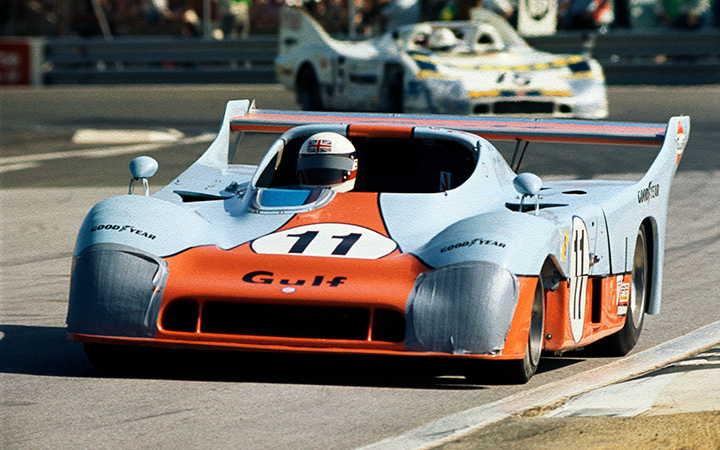 This week Bell was back in the little French town of La Chartre sur le Loire where John Wyer based his team all those years ago. In the sunlit square outside the Hotel de France sat the Mirage in those famous blue and orange colours. Sitting on the side of his car, looking as sharp and dapper as ever, Mr Bell soaked up the sun and the adulation. 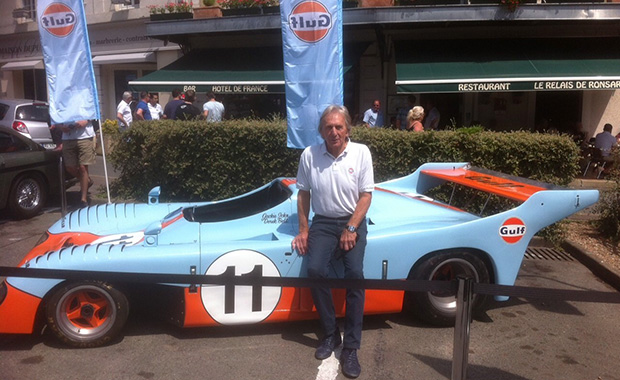 Sadly Monsieur Ickx couldn’t be there for this emotional reunion, the only gap in an otherwise perfect day.

“We always stayed here for the race in those early days,” Derek tells me, “they worked on the car in the local garage, parked it in the courtyard of the Hotel de France, put it back in the truck and took it to the circuit in the mornings. We had some great times here, it’s quite emotional to be back in race week, 40 years since the win with the Mirage, and 20 years since I shared the McLaren F1 GTR with my son Justin and Andy Wallace, coming third after we’d led for 16 hours.”

In 1975 Bell and Ickx knew the Gulf Mirage was a very good racing car, had the potential to win, but there were some doubts about the durability of the Cosworth V8 over 24 hours at La Sarthe.

“Yes, that’s true,” says Derek. “When John Wyer spoke to Keith Duckworth about going to Le Mans with the Cosworth, Keith said ‘I wouldn’t go, lad.’ So Wyer prepared his own engines with a lower rev limit, which gave us reliability and better fuel economy. Remember, that engine was built for a Grands Prix, not a 24-hour race, so we couldn’t sit at 9000 revs all the way down the Mulsanne; we kept to about 8400, which still gave us about 195mph.

“In the end our biggest problem was not the engine. We had to change the exhaust manifolds and then the back end started to move around, which didn’t feel great, and after the race we found that a suspension link had broken. By the end I was pretty exhausted – I think I did the final stint because Jacky wanted to get cleaned up and look smart on the podium! We got on very well right from the start, but we hardly spoke during the race, I mean he got in, I got out, and that’s how it went, but we had similar styles, we looked after the car, handed it over as good as when we got in.” 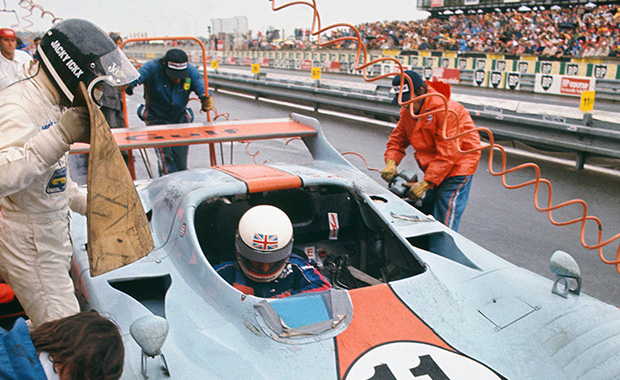 Looking down into the cockpit Derek starts reeling back the years.

“The heat was immense. People say, you know, you were out in the open air, but we were sitting on the radiator pipes, right next to your thighs, and towards the end of the race the car was trying to shake itself to bits, getting quite loose at the rear end too. We didn’t have drinks bottles, all the comforts they have today, and I was just knackered by the end. I looked like I’d been dragged through a hedge backwards,

“That first win at Le Mans changed my life and I realised that my future was in sports cars, that I wasn’t going to be a Formula 1 champion. When I joined Ferrari back in 1968, where of course Jacky was a team-mate along with Chris Amon, it was too early for me. My race driving got better and better as I went into my 30s, and I knew I could be successful in long distance races.”

A superb lunch – hosted by Gulf at the Hotel de France – gave Derek the chance to tell many more tales of a long and distinguished career. Tomorrow he will be back on the track at La Sarthe, this time at the wheel of the McLaren F1 GTR from 1995. For the tens of thousands of Brits who come to Le Mans each year Derek Bell is, and always will be, one of their heroes.