“Frankly, I don’t think too much about age. If I didn’t feel that I was good enough to be on the track, then I wouldn’t be there.”

So declares Dominique Bastien, who will enter the Le Mans 24 Hours for this first time this weekend, becoming —  at 74-years-young — the oldest driver ever to compete in the race.

Participating in the GTE-Am class, the French-born American is driving for the front-running Dempsey – Proton squad, sharing his Porsche 911 RSR with team-mates Thomas Preining and Adrien de Leener, whose combined age is 53.

The entrepreneur built his fortune in packaged food, before turning to racing full-time in retirement. Age is seemingly no barrier for this La Sarthe rookie, who is set to take the record of oldest competitor from Jack Gerber, who finished on the podium in 2013 at the age of 68.

“I promised my son that I would buy him a course at a racing school — I thought, ‘I’m going to do it myself!’”

As a French-born American who originates from Dunkirk, Bastien’s initial awareness of the enduro classic came in harrowing circumstances – back in 1955.

“My first experience of racing, if you will, was when I was nine years old,” he told Motor Sport, “I walked into my father’s office – he was with my mother – and they both had a look on their face, like something terrible had happened.”

“They were listening to the radio, hearing the news of the big accident at Le Mans, when Pierre Levegh crashed into the grandstand and 84 people were killed.”

“That’s my first memory of Le Mans – a sad one – and so the race is always a bit difficult in this way.”

The family soon moved state-side and Bastien became involved in the food industry. He worked his way through marketing and management roles before setting up his own company, Speciality Brands of America, with a group of investors, eventually building a business empire and amassing his fortune.

Then, after a life devoted to turning the wheels of commerce, Bastien pulled an up-shift.

“Ironically, I had promised my son that I would buy him a course at a racing school – this was twenty years ago,” Bastien remembers.

“It was a three-day programme at the Skip Barber school in California. And I was staying three days at the track watching cars buzzing by, so I thought, ‘I’m going to do it myself!’”

The bug that bit Bastien? 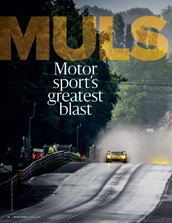 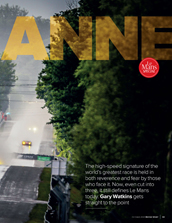 “The ability to be on the edge, to get better and better and prove yourself,” he emphasises, “there’s a constant need to learn and find more speed. It’s exciting, it’s fun!”

Progress was swift as the former morsel-magnate became a single-seater rookie in his early 50s. Bastien first raced in Skip Barber’s own championship, competing against some opponents of real pedigree – including future Indy 500 winner Alexander Rossi.

From there Bastien switched to the Pro Mazda series, racking up the racing miles. However, age-related physical factors forced a migration to a new category.

“In the end in Pro Mazda, I was going into some corners with such g-forces that I realised I needed to find something new in my life!” Bastien recalls. “Your neck, shoulders and so on take a real beating.”

The French-American decided on a switch to endurance racing.

“I moved to sportscars and I went to Germany. I did nothing but the Nürburgring for three years.

“First I learned the track, then I twice did the Nürburgring 24hrs race with the Audi Race Experience, finishing both times.

“And then I went on to do the 24 Hour Series which I’ve been doing for the last three years.”

Bastien relishes the challenge and variety of sportscar racing.

“It’s the whole experience; the cars themselves are fantastic. You also have the traffic, you have the night, you have this going over 24 hours.

“Lots of tracks: Monza, Portimao, Hockenheim etc. Endurance racing has more diversity to it, more things to learn, more fun to have in more ways!”

The gentleman racer continued to defy convention by improving further still, gaining two wins in the series this year. This upward trend in performance gave him an idea.

Bastien had considered taking a punt at Le Mans before in 2015, but admits he ultimately found the depth and quality of the field too intimidating to enter. Five years later and things have changed.

“I was at Monza (this year) with my team-mate Gavin Pickering. We were within a few tenths of him the whole weekend, and he’s a well-respected driver. He did Le Mans for many years, in GTs and LMP2s.

Bastien cast his net amongst the Le Mans field and has found himself at the competitive Dempsey – Proton Racing team.

The Covid crisis this year meant more La Sarthe seats were available, inevitably inviting even more comments than usual about the age and abilities of some of the entrants. Is it an issue for Bastien?

“People ask me – frankly I don’t think too much about age, it’s not much on my mind,” he tells us, “Let’s be clear, I was aware of [the record] and at peace with it.

“For me though, when I’m on a race track, I don’t go there and say ‘Well, I’m the old guy’, I go in there trying to put in some competitive laps, you know, and be faster than many guys who are younger than me.

“What I want to do is to be viewed from the results I did on track as opposed to my ‘resolve through the lens of my age’.

“So obviously my age is a plus – noteworthy I would say – but at the same time, if I didn’t feel that I was good enough to be on the track then age or no age I wouldn’t be there.”

Predictably perhaps, Bastien believes the criticism made of “gentleman drivers” i.e. wealthy amateurs who pay for their seats, of which he is one, is often not merited. He feels many of these so-called “pro-billies” more than justify their place on the grid, but he’s also aware of their limitations.

“In terms of performance with gentleman racers, there’s a whole range of capabilities – much wider than the professional level,” Bastien says, “You have some who are really slow, then you can have some gentleman drivers who are for practical purposes just as good as pros.

“So therefore it is very important when you’re looking at the entry, to observe that some bronze-rated (amateur) drivers are fast, real fast.

“I would say that I hold my own pretty well in the mid-pack.”

However, he’s under no illusions about how his capabilities compare to that of his professional team-mates. There’ll be no racing at night for Bastien, and his track-time will be limited to six hours in total.

“The fact of life is, even if I was 40, the difference between a ‘gentleman driver’ and a pro is night and day, he says.

“I’m a bronze driver, so I think priority number one is: don’t mess-up! Do strong, consistent laps that help the team.

“The whizz kids put in the real times and get the result for us.”

With a finish being his main aim, what then lies beyond Le Mans for the businessman turned race driver?

“I don’t know,” Bastien admits, “I think in my mind, I would ask myself ‘Am I having fun? Am I learning? Am I contributing?’

‘On those three scores so far, so good. As long as that continues, then I think I will carry on and if any of those characteristics go away then I will stop immediately.’

Even if he does stop competing at the highest level of sports cars, Bastien still has his old sparring partner back home in the US.

“Recently my son and I have been doing single-seater races with Lucas Oil – we’re going to Sebring in October.

“I’m pleased to say that last year he beat me fair and square. Whatever you write about me, please mention that!”

This is looking far from the final tour for Dominique Bastien.