Jaguar was nicely low-key at Le Mans in 1953. It had panicked the year before and radically altered its cars at the last minute, paid a heavy price for it and learned an important lesson.

This time around it had pushed the plane out by grabbing an air lift from Lydd to Le Touquet, but otherwise all looked remarkably familiar: a handful of mechanics, overseen by ‘Lofty’ England, tending three XK120Cs seemingly identical to its 1951 winner. 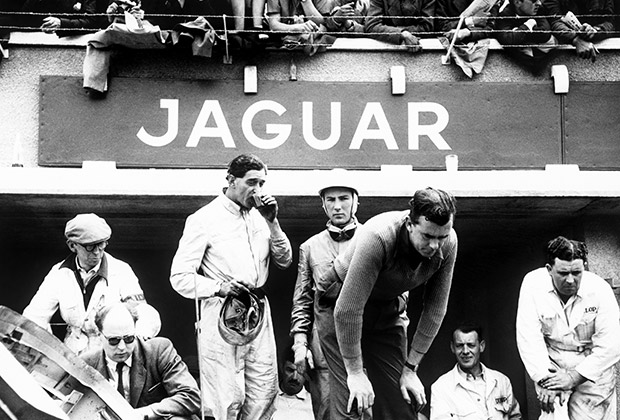 In fact there were subtle differences under aerodynamicist Malcolm Sayer’s mathematically conceived, artistically rendered flowing skin. Chief Engineer Bill Heynes and Phil Weaver’s new comp shop had pared more than 100lb from a works C-type, while a switch to Webers from SUs had boosted the 3.4-litre XK ‘six’ to 220bhp, increased its torque and widened the usable rev range.

The most telling change, however, was its utilisation of disc brakes. Jaguar’s pioneering work with Dunlop was beginning to pay dividends. Boiling fluid and the unnerving phenomenon of pad knock-off being (almost) things of the recent past, drivers no longer feared the worst as they plunged into Mulsanne Corner. Rivals’ large drum brakes could match discs’ ultimate stopping but not their formidable staying power. Stirling Moss, aided by his C-type’s Girling transmission-driven servo, gleefully took yards out of everybody, every lap. His times in practice caused some people to take notice, yet few could see beyond the fiercely muscular Italian coupés.

Ferrari, Alfa Romeo and Lancia had built brand new cars for the event: powerful V12s, in-line sixes and supercharged V6s. With their bulging haunches, scoops and vents, they looked purposeful. They also boasted every world champion and every GP winner to date bar Luigi Fagioli: Alberto Ascari and Giuseppe Farina were with Ferrari, Lancia had Piero Taruffi and José Froilán González on its strength, and Juan Manuel Fangio was at Alfa Romeo. Even so, American Briggs Cunningham’s team dwarfed their efforts. 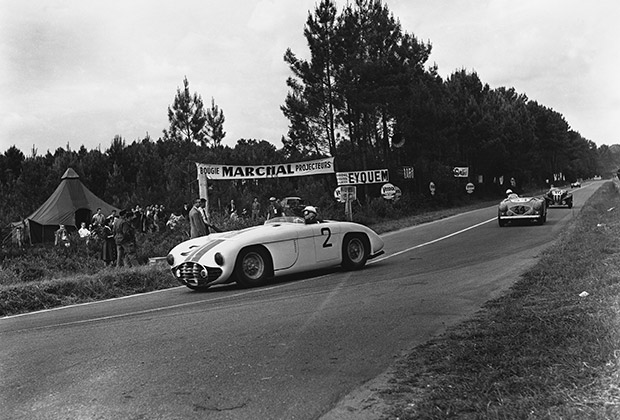 Le Mans was a long way from Cunningham’s base at West Palm Beach, Florida, and so a fully equipped mobile workshop and packing crate upon packing crate were the ‘norm’ for this team. Its immaculate mechanics in personalised overalls made Jaguar’s faithful crew look distinctly underdressed.

Alfa had its huge transporter with trailer, Ferrari had its fancy illuminated signalling board, complete with Prancing Horse and Shell logos, while Jaguar had bog-standard garage car jacks – plus a quiet confidence born of a fast, proven car. It even skipped Friday night’s practice to discuss what average it should set during the race.

Moss, paired with 1951 winner Peter ‘Skid’ Walker, was Jag’s hare. In the lead by lap four – Syd Allard’s Cad-Allard J2R led the first lap but retired soon after – Stirl pulled smoothly away until a misfire set in 16 laps later. His subsequent unplanned pitstop for spark plugs, plus another for the eventual cure – removal of a clogged fuel filter – were Jaguar’s only major hiccough for the entire distance. 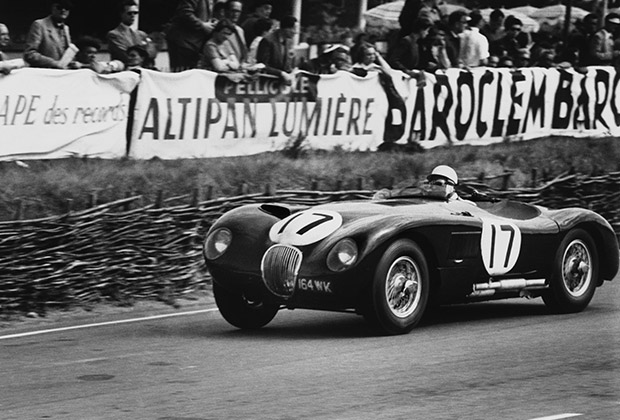 In contrast, the Italian cars fell like flies – or shot themselves in the foot: Mike Hawthorn’s 4.1-litre Ferrari was disqualified when its brake fluid was topped up illegally early. The bulk of them joined the also-rans of Gordini, the older Cunninghams, Talbot-Lago, Nash-Healey and Aston Martin. Only the 4.5-litre Pininfarina-penned Ferrari Berlinetta of Ascari and mentor ‘Gigi’ Villoresi was able to take the race to the C-types. It assumed the lead when Moss had his problem, but was soon overhauled by the Jag of Tony Rolt, sharing with Duncan Hamilton, who upped his pace by a ‘mere’ five seconds in response to this threat. Ascari would ultimately set the fastest lap of the race, but his car would only lead again when this duelling pair was out of sequence during pitstops.

Rolt and Hamilton’s prime concern was a broken windscreen. The buffeting they endured along the Mulsanne Straight was distinctly uncomfortable – but then so was trying to escape from Colditz or flying painfully slow and vulnerable Westland Lysanders for the Fleet Air Arm. At least nobody was trying to shoot you at Le Mans.

The chasing Ferrari had more – and greater – problems. Its drum brakes wilting, increased use of its four-speed gearbox to slow it down wore the clutch, a problem exacerbated by having to exit the pits on a churning starter motor. It couldn’t last. All drive was lost after 20 hours of endeavour.

Cunningham’s latest, the 5.4-litre Chrysler ‘Hemi’ V8-powered C5-R driven by John Fitch and Phil Walters – also known by the excellent nom de zoom ‘Ted Tappet’ – had a dig in the closing stages, coming perilously close to ‘V1 rotate’ as it achieved the race’s fastest speed along ‘The Muldoon’. Jaguar, however, had that base covered, too, Moss/Walker recovering from 21st to act as wingmen, four laps in arrears in second. 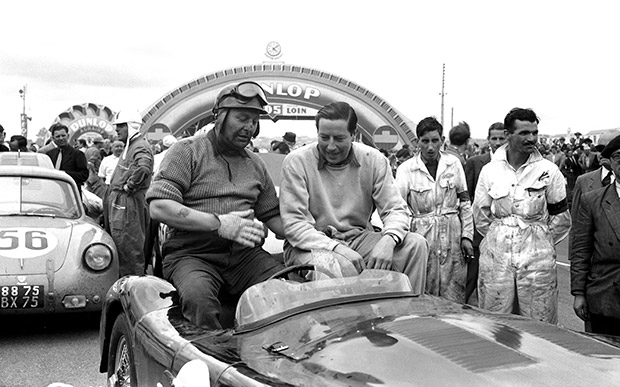 Not only were the winners the first to average more than 100mph for the 24 hours – 105.8mph – but also all four C-types finished. The third works car of Ian Stewart and Peter Whitehead – the former the stylish Scot who so impressed a young Jackie Stewart (no relation), the latter Walker’s winning co-driver of 1951 – finished fourth, two laps behind the booming Cunningham. The other C-type was a standard version. Entered by Ecurie Francorchamps for Belgians Roger Laurent and Charles de Tornaco, and supported by the works, it finished ninth.

Audi’s domination of this race in the 21st century has been wondrous to behold. But in terms of economy of effort and marketing bang for your buck, Jaguar’s success of 60 years ago takes some beating. This small Coventry company, not yet part of the establishment, was about to become the world’s most successful maker of high-powered sports cars. Ferrari and Porsche have also scored more Le Mans victories than have Jaguar, but even they did not make a leap as gigantic as the Cat’s.