In the end there was immense relief, deep emotion, satisfaction at a job well done in the most extreme circumstances… but more than anything an overwhelming sadness that the 2013 running of the world’s greatest motor race couldn’t escape. This was Tom Kristensen’s ninth, Allan McNish’s third, Loïc Duval’s first and Audi’s round dozen: all thoroughly deserved after a typically professional performance at Le Mans. But there was someone missing – and his absence made it all seem inconsequential as the clock turned to three. 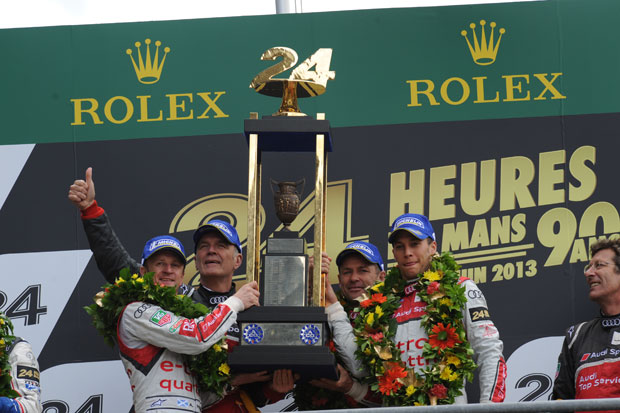 On the podium, Jacky Ickx addressed the crowd before the top three crews accepted their hard-won trophies. With a devastated David Richards on his right shoulder, the six-time winner of the 24 Hours stately plainly what we know only too well: “It reminds us that automobile racing is a dangerous sport.”

Kristensen, McNish and Duval had led from the seventh hour when Benoït Treluyer failed to get away from a pitstop and his R18 e-tron quattro was wheeled into the garage for a fiddly alternator change. With Toyota unable to offer a challenge on pure pace, from that moment it was Audi’s race to lose, and the team delivered in style, defying the extreme stresses created by the elements in the 23rd hour.

Ten crazy minutes almost turned the outcome of each class on its head, as a sudden and heavy shower hit the Circuit de la Sarthe – or to be more accurate, the southern part of it. In those moments, Kristensen made sure that his incredible win record would be added to, while Aston Martin lost its chance of the GTE Pro class victory that every neutral wanted, as the perfect tribute to its fallen driver.

Various storylines played out all at once. It was chaos – and pure drama.

In LMP1, Kristensen had just made a scheduled stop and with a lap in hand over the second-place Toyota of Sébastien Buemi, Anthony Davidson and Stéphane Sarrazin he kept his cool to stay on track. Both cars pitted for wet-weather tyres.

Yet another safety car period had been called as Ludovic Badey’s Thiriet by TDS Racing ORECA damaged more steel barriers, in an accident that he was helpless to avoid. Now we began to wonder: with a little over an hour to go, would there be time to make the repairs and restart the race?

Thankfully, the answer would be yes. With half an hour remaining, the safety cars pulled in and the Audi crew were left biting their nails as Kristensen worked to bring it home. Buemi added to the tension by unlapping himself, flashing his lights at Tom as he did so in an act of cheeky gamesmanship. But both were marginal on fuel and soon he would be forced to back off and allow the Audi back past, dutifully taking his place behind the race winner. 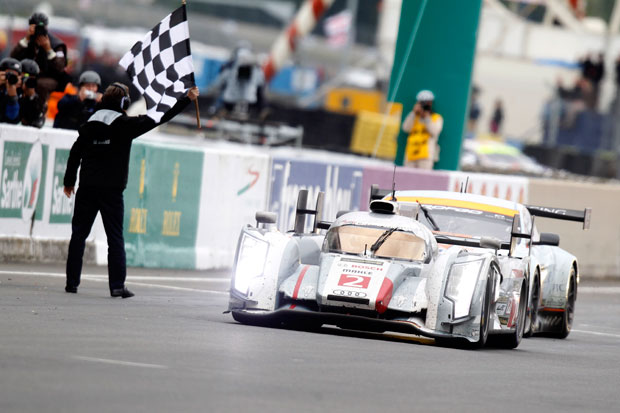 The R18 of Oliver Jarvis, Lucas di Grassi and Marc Gené, which had lost two laps with a puncture earlier in the race, secured the third podium position for Audi, while Toyota scraped a fourth place with its runner-up position – against the odds.

In that initial squall of rain, Nicolas Lapierre arrived at the Porsche Curves and couldn’t stop his TS030 Hybrid slithering straight on and into the tyres. It was a heavy impact and he walked away looking ashen-faced as he contemplated what he’d lost with an hour and a quarter to go. Until he realised he could save it all.

Having looked closer at the car, he jumped back in and remarkably managed to hobble back to the pits. The Toyota crew went to work, patching up the car and sending him back out, from an impact that had looked terminal. Their work secured the team that fourth place, in defiance of the heavily delayed Treluyer/André Lotterer/Marcel Fassler Audi – the fastest car of the race – that had to settle for fifth.

First of the LMP1 privateers was the British Strakka Racing crew of Jonny Kane, Danny Watts and Nick Leventis, a superb result for the team given its struggles in qualifying. It inherited sixth overall thanks to Rebellion Racing’s troubles on Sunday morning, but that didn’t make it any less deserved.

In GTE Pro, Stefan Mücke was just building up to challenge Richard Lietz’s factory Porsche 911 for the class lead when they hit the wall of water at the Porsche Curves. Both tip-toed back towards the pits, but as the Aston came in Lietz sensationallt gambled and stayed out.

Now what should the British crew do? They fitted wets to the Vantage, but then changed their minds and bolted on more slicks. Further down the pitlane, the second Porsche of Patrick Pilet also pitted and took on treaded rubber. They were all throwing the dice and no one had any idea which gamble would pay off.

For Lietz, it appeared his bravery had backfired when he pitted for wets a lap later. Was this Mücke’s chance? No. Into the last hour, the constantly variable conditions forced him in for treaded tyres too, and the battle was decided: a one-two for Porsche on its return as a works force for the first time since 1998, and a valiant podium for the emotionally shattered Aston Martin team. 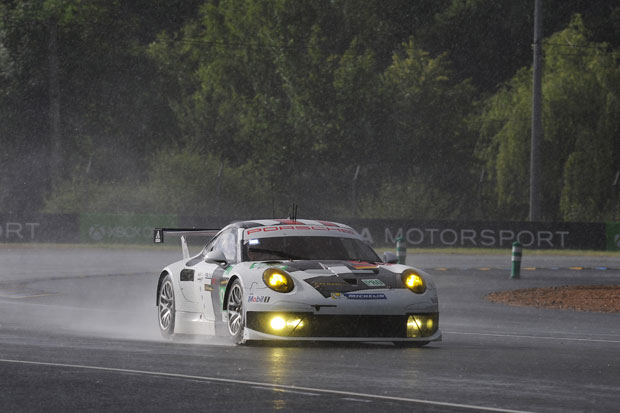 For the LMP2 crews, again that sudden rain shower almost turned the race on its head. The Oak Racing Morgan of Bertrand Baguette spun in the chaos the downpour caused, almost colliding with Badey’s stranded ORECA. But damage was light and the Belgian recovered to bring it home ahead of team-mate Olivier Pla. Justice was served. It would have been cruel to lose a race Baguette had led for so long, sharing with Ricardo Gonzalez and Martin Plowman. 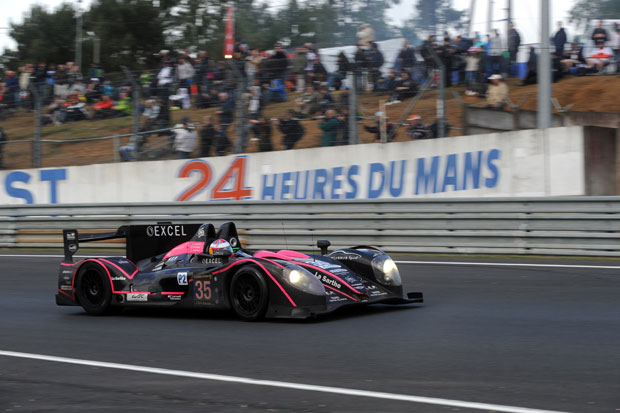 But once they’d all taken the flag, all thoughts returned to the one who was missing. The storylines had been captivating, but they were also hollow. On weekends like this, motor racing just doesn’t matter a jot.