A notional concept, rest. It doesn’t matter how many times you cover Le Mans, nor how well you appreciate the benefits of a break: your thirst for information makes sleep forever elusive, and it doesn’t help when your tent is pitched about 50 metres from the Porsche Curves. Away from the track shortly after 1am, back by 6.30…

It’s hard to monitor the race’s progress armed only with a sleeping bag and a pillow, but you can hear when the safety car is on duty – as has rather too often been the case (more than four hours, to date).

The race remained neutralised at 9am, following Andrea Belicchi’s accident on the Mulsanne, and didn’t resume for another 15 minutes. The multiple safety car system creates several knots of cars with widely diverse performance, so restarts are occasionally a recipe for yet another interruption, but this one was clean enough, the McNish/Kristensen/Duval Audi continuing to lead the Sarrazin/Davidson/Buemi Toyota by more than a lap.

If ever you’ve watched Kamui Kobayashi in Formula 1, you’ll know of his appetite for kerbs. Even by his standards, however, an aerial assault on the Ford Chicane was extreme. In truth the Japanese simply slid wide after being caught out by a rain shower that was heavy enough to persuade McNish to opt for wets when he came in for a service. He was the only one of the leaders so to do, but it didn’t look too bad a decision when, moments later, Frédéric Makowiecki lost control of the GT Pro-leading Aston Martin Vantage exiting the first Mulsanne chicane. The car bounced back into the centre of the track, the front end very seriously damaged and its race run. In light of yesterday’s tragic events, an Aston class win would have a certain poetic symmetry: for now, the prospects have been reduced rather than eliminated, with Darren Turner/Peter Dumbreck/Stefan Mücke haring after the Marc Lieb/Romain Dumas/Richard Lietz Porsche.

Makowiecki’s accident triggered yet another safety car, with the barriers once again being badly buckled, and the leading Audi was soon back on slicks when action resumed. Rebellion completed repairs to Belicchi’s Lola, which returned to the track just after 11am, but there were less productive performances elsewhere in the pits. Matteo Malucelli tried to rejoin before AF Corse had removed his refuelling hose. Once that was unscrambled, the Italian’s Ferrari 458  was waved away… straight into the path of the Jacques Nicolet/Jean-Marc Merlin/Philippe Mondolot Morgan-Nissan, which was tipped into a half-spin as the two cars came together. 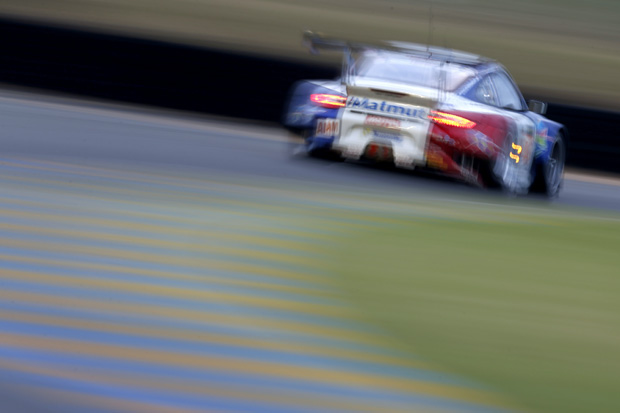 Things are still relatively rosy for other Morgan-Nissans, with Bertrand Baguette/Ricardo Gonzalez/Martin Plowman and Alex Brundle/Olivier Pla/David Heinemeyer Hansson running first and second in LMP2. Porsche presently leads both GT divisions, with the 911 of Raymond Narac/Christophe Bourret/Jean-Karl Vernay out front in GT Am.

Things look fairly settled at the time of writing, but more rain is forecast – some of it heavy – and at the front things are still close enough for a minor change of wind direction to make a difference.

Daylight at Le Mans. Well, sort of. Morning has broken in a haze of grey, the Sarthe region appearing to have ignored that it’s June. The French summer feels more like March. 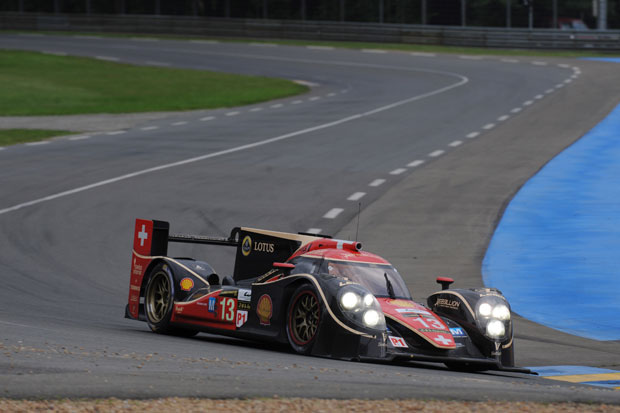 At 9am, the crowds remain thin in the grandstands and on the banks, and you can’t blame them if they’re staying in their sleeping bags a little longer. It’s cold out there. Meanwhile, on the track the cars are yet again running behind the Audi safety cars. Nothing to see here.

Bill Auberlen’s Aston Martin was the initial cause for the inactivity, his Vantage dropping oil down the Mulsanne and into the second chicane. Out came the marshals with brooms and buckets of cement – and in came the no 12 Rebellion Lola, which had been running sixth. In a matter of minutes, this usually reliable team would find its race imploding.

At the restart, Andrea Belicchi lost control of the no 13 Lola as he accelerated out of the second chicane, the car nosing hard into the guardrail. More twisted metalwork to be replaced. The Italian, who had been running fifth, nursed the coupé back to the pits with heavy frontal damage. Both black cars began the 19th hour in the garage, with the race once again neutralised.

At the front, it was business as usual for Tom Kristensen, who maintained the no 2 Audi’s advantage – and it stretched a little further when the second-place Toyota got caught at a pitlane red light after stopping as Auberlen’s Vantage dropped its load.

In LMP2, the Oak Racing Morgan-Nissans continue to duke it out, while the Aston versus Porsche fight for GTE Pro honours rumbles on. Through the morning the two Vantages and two 911 RSRs were separated by little more than a minute, although there was a setback for Marc Lieb’s Porsche when he was punted into a spin by a Pro Am Ferrari moments after the restart. He recovered and still runs second to Bruno Senna’s Aston.

As it stands, we’re relying on the LMP2 and GTE Pro classes to keep us warm on a chilly morning. But with a quarter of the race still to go, there’s ample time for a sting in the Audi tale.

The graveyard shift: the cold hours before dawn when everyone’s lack of sleep finally bites. The temperature dropped notably after midnight, a strong breeze picked up and then the rain arrived leaving only the die-hard fans in the grandstands opposite the pitlane. There are still small groups of spectators, and even the occasional fan sat on his own – hip flask in one hand, flag in the other – but the stands won’t be full again for another nine hours when the winners cross the line. 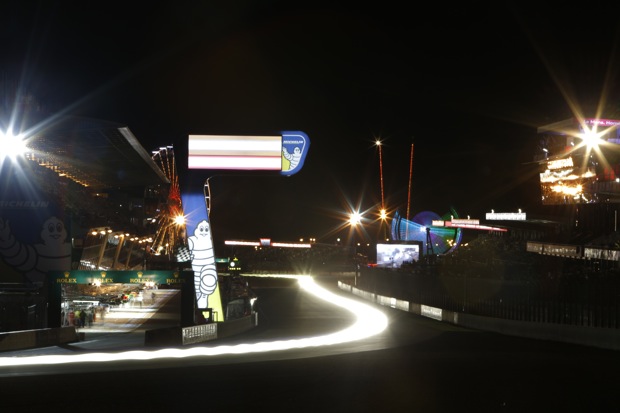 Even outside of the paddock the atmosphere is unusually subdued after the tragic events of yesterday afternoon. Where there would usually be stacks of empty beer bottles and loud race fans there are relatively quiet huddles of spectators watching the on-track action, which, to be fair, in the last three hours has been largely made up of a safety car period to mend the Tertre Rouge Armco barriers after Howard Blank reversed his GT Am Ferrari 458 Italia into them at speed. It was the seventh safety car period of the race and pushed the number of hours behind the Audi pace car up to three and a half.

The safety car was out at 3.03am and it was due to pull in just under an hour later. However, it was kept out as heavy rain started to fall and the cars dived into the pits to change to wets.

This was the sort of weather Toyota needed and sure enough the two cars started to gain on the lead Audi. The weather, and optimism in the Toyota camp, wasn’t to last, though. The track soon started to dry and an hour later the Audi, with Duval at the wheel, started to pull away. 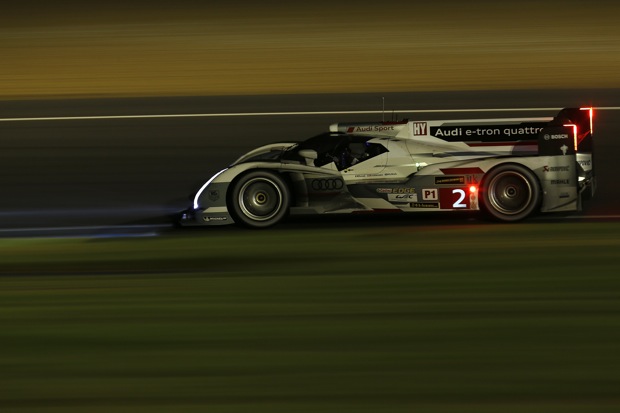 It hasn’t been an easy few hours for the Ried/Roda/Ruberti Porsche that was running well in GT Am as Romain Brandela, aboard the DKR Engiuneering Lola B11/40-Judd LMP2, turned in on them shortly after coming off the track. Brandela was cruising round the track following his off and didn’t see the Porsche in the run up to the Esses. While the No 88 car managed to get back to the pits, it needed repairs and is now running down in ninth in class. The matter is quite rightly under investigation. Up front in the GT Am class the battle continues between the Narac/Bourret/Vernay Porsche and the Ferraris of Perazzini/Case/O’Young Ferrari and Gerber/Griffin/Cioci.

The advantage in GT Pro continues to swing between the Lieb/Lietz/Dumas Porsche (now in the lead) and the Aston Martins of Bell/Makowiecki/Senna and Drumbreck/Mücke/Turner. Brit Alex Brundle put in a great stint in the OAK Racing Morgan Nissan and as 6am ticked by team-mate Olivier Pla was leading the class ahead of the Baguette/González/Plowman Oak Racing Morgan Nissan and the Dolan/Turvey/Luhr Zytek Z11SN-Nissan.

After hours of darkness dawn is breaking over La Sarthe, but we still have the equivalent of a Petit Le Mans left to run.