Sébastien Ogier has been confirmed at the November WEC Rookie Test in Bahrain, driving a Toyota GR010 Hypercar, and could be competing at Le Mans as early as next year, saying it’s his ‘dream’ to compete in endurance racing.

Seven-time WRC champion Ogier has recently been at the Toyota Motorsport headquarters in Cologne, where he had a seat fitting and spent two days pounding round the Bahrain International Circuit on the manufacturer’s simulator.

Last season the Frenchman tested the Toyota’s LMP1 TS050, and will now have to adjust to the idiosyncrasies of its new Hypercar.

Introducing our "rookie" for the Bahrain test… @SebOgier
Not many rookies come with seven world titles 🏆🏆🏆🏆🏆🏆🏆
We can't wait to see what you can do in our GR010 HYBRID Hypercar!#PushingTheLimitsForBetter @FIAWEC @24hoursoflemans pic.twitter.com/hQt0r68IM8

He told Motor Sport last year he was hoping to get behind wheel of Toyota’s Hypercar, and now that hope has turned into reality.

The Frenchman’s part-time schedule for Toyota in next year’s WRC has yet to be confirmed – it might just leave space for him to compete for sports car racing’s biggest prize at Le Mans. 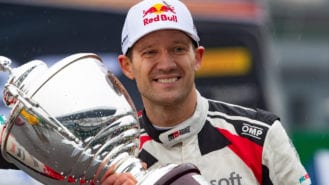 Sébastien Ogier: a green future on the grid at Le Mans?

Sébastien Ogier, the seven-time world rally champion who leads this year’s standings after Rallye Monte-Carlo, has reiterated that he won’t go back on his decision to retire from the championship…

“I’m happy to be driving the GR010 HYBRID Hypercar on track for the first time in the official WEC rookie test in Bahrain,” Ogier said. “The simulator session went well; it was nice to work with the team and discover the GR010 HYBRID for the first time. I could already feel that the Hypercar is very different to the TS050 HYBRID which I drove on the simulator last year.

“As everyone knows, it’s a dream of mine to compete in endurance racing in the future and the test in Bahrain is important to learn more about the car and about my own level. It’s a big challenge for me and I’m working hard to be ready for Bahrain, but I’m really looking forward to it.”

The part-time WRC campaign will also allow the Frenchman more time to transform his world-renowned off-road skills into a greater on-track acumen.

“Sébastien Ogier is well-known in the world of motorsport and it will be an honour to host him in Bahrain as he makes his endurance debut,” added FIA WEC CEO Frédéric Lequien. “Our rookie tests are the perfect opportunity for drivers from a wide variety of disciplines to test our WEC machinery and it will be interesting to see how he adapts his rally skills to that of the Toyota Hypercar.”