Looking back at the Mazda RX-7 and how it made its impact in touring car racing, before becoming the tuners’ poster child 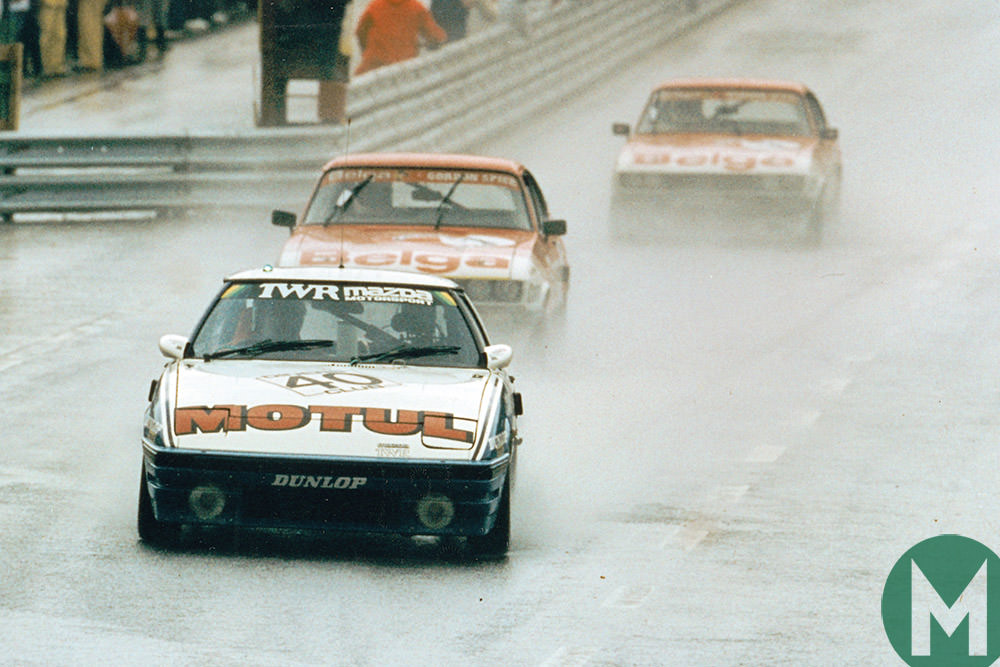 The Mazda RX-7 showed the world that Mazda could produce a driver’s car in 1978, long before the Mazda MX-5 revolutionised the roadster.

Having taken America by storm – Mazda was reportedly selling 5000 a month in the United States, more than the Porsche 924 and the Datsun 280ZX – the rotary-powered car was introduced to the UK in September 1979. ‘Demand was soon outstripping supply, even though its reception here was rather critical in some respects,’ we wrote at the time.

Its braking, tyres and interior seemingly weren’t up to scratch, but Mazda updated those by 1982. For £9200, it wasn’t that much cheaper than 924 and the 280ZX, but Bill Boddy praised its ‘good handling, nice five-speed gear change, fairly comfortable front seats and handsome appearance’, all of which added up to make an ‘excellent fun car’.

Still, the Ford Capri cost £1000 less. And that had racing pedigree. It had won the Spa 24 Hours in the three years since the RX-7 had been released, with Belgian pair Jean-Michel Martin and Philippe Martin unbeaten in the last two.

But, as it did with the rotary engine, Mazda pushed on. Continuing with Tom Walkinshaw Racing, it entered three RX-7s into the 1981 Spa 24 Hours with Walkinshaw and Pierre Dieudonné at the helm, Win Percy and Peter Lovett in the second, and Marc Duez, Jeff Allam and Chuck Nicholson piloting the third.

“The RX-7 was a very light, responsive car,” says Dieudonné in a recent interview with Mazda. “So physically it wasn’t a problem.

“But even so, the odds were against us. We were in the second class, for cars with engines smaller than 2500cc. The favourites were the cars with engines bigger than 2.5-litres, such as the BMW 530i and Ford Capri.”

It was particularly tricky for the Belgian as he was in a right-hand-drive car, changing gear with his left hand. Plus, the rear drum brakes and live rear-axle would cause the rear wheels to lock-up – though it ran with discs at Spa.

This was the ultimate race for touring cars, tin-tops’ Le Mans

“Even so, we qualified second, on the front row of the grid behind a Chevrolet Camaro,” continues Dieudonné.

“The start was wet and initially we dropped back. But Tom took a gamble with the tyres, which paid off, and we came back through so that after nine hours we were second behind one of the BMWs. I said to Tom maybe we should ease the pace and settle for second. He said we should go flat out for the win and gave me another 500rpm. That was Tom all over. He wasn’t interested in finishing second!”

Walkinshaw’s attitude was understandable. This was the ultimate race for touring cars, tin-tops’ Le Mans, and 65 cars had attempted to qualify for just 55 available grid slots.
The leading BMW 530i was two laps ahead by dawn, when Walkinshaw handed control of the RX-7 over to Dieudonné. “Go flat out – 9000rpm – and push like crazy,” Walkinshaw told Dieudonné. “It’s our only chance of breaking that bloody BMW…”

The RX-7 and the 530i traded positions for the lead and, with two hours left, Walkinshaw was back in the car chasing Jean-Claude Andruet. Half an hour later, the BMW succumbed under the pressure: a rocker arm broke leaving just five of its six-cylinders firing.

It settled for runner-up behind the RX-7.

In typical Walkinshaw fashion, inventive modifications had been made – the RX-7 ran with low-level headlights, gaining 5mph at full chat, according to Andrew Frankel.

The gearbox was also the same as that in the road car, the steering heavy and ‘the brakes a little dead.’

‘Increase the effort level and it becomes another car altogether,’ he wrote following his track test of the car at Blyton. ‘The engine needs revs, in the same way that a Cosworth DFV without modern electronics needs revs… It responds to a technique that allows it to carry speed and use power at high revs to compensate lack of mid-range torque.

‘It must have been hard work indeed to keep the RX-7 on the boil hour after hour, all through the day and night.’

“Winning Spa gave the RX-7 prestige,” explains Dieudonné. “It was the first time a Japanese manufacturer had won the Spa 24 Hours and, interestingly, the last time a team of two drivers won that event.”

The rotary engine had won the Spa 24 Hours for the first time ever, and so had a Japanese car. This was a milestone moment, and it sowed the seeds of success not just for Mazda, but for Dieudonné.

“I’ll always remember the RX-7 because it opened the door for me to a long career with Mazda,” he said.

The RX-7 sent him clean off the skid pan at Goodwood.

“Obviously being Belgian I was very proud to win the Spa 24 Hours and we got extra attention because Belgian TV had fitted an onboard camera to the car. It meant lots of people got to see the Mazda in action on live TV. At the time, that was a real novelty.”

Already a Le Mans class winner in 1977, Dieudonné’s greatest successes at the Le Mans 24 Hours came with Mazda between 1987 and 1989, when he picked up three consecutive GTP class wins in the 757 and latterly the 767B. And Mazda, of course, continued with its rotary engine to win the 1991 Le Mans 24 Hours with the 787B.

The RX-7 continued to evolve, too. In 1987, Gordon Cruickshank said that the ‘new car steps up a grade’ as a more powerful and purposeful machine. Better even than the Toyota Supra, he reckoned.

A decade later, Frankel wasn’t so keen on the curvy, sleek evolution of the RX-7 as he tested the Mk3. Better looking, but it sounded like an ‘electric hedge-trimmer.’

‘Yet this was nothing after the RX-7’s most startling flaw,’ he continued.

‘Dull steering’ and ‘unintended oversteer in a way I thought road cars had abandoned years ago,’ the RX-7 sent him clean off the skid pan at Goodwood.

‘It was heading for the bank when I decided that now was a good time to break the no-correction rule,’ wrote Frankel.

‘The RX-7 never did hit the big time over here,’ concluded his review. ‘I miss its looks but not, for a second, the way it drove.’

And yet, the RX-7 found fame as a blank canvas for tuners and drivers, and perhaps infamy for its association with boy racers. More than 70,000 were produced between 1992 and ’95, but just 210 were sold in the UK in that time. Find a factory-stock one now without aftermarket parts fitted and you may as well have stumbled upon the holy grail.

It earned its reputation from TV and films of the early-2000s, particularly the Fast and the Furious series. Donning its transformative ‘Veilside’ bodykit, the RX-7 soon became the poster child for the tuner scene, along with its Nissan Skyline and Toyota Supra rivals.

You may have seen it go sideways at the hands of New Zealander ‘Mad’ Mike Whiddett, or fitted with a huge rear wing on an uncomfortable-looking negative camber, but – like any covetable sports car – the RX-7’s legacy stems firmly from motor sport.