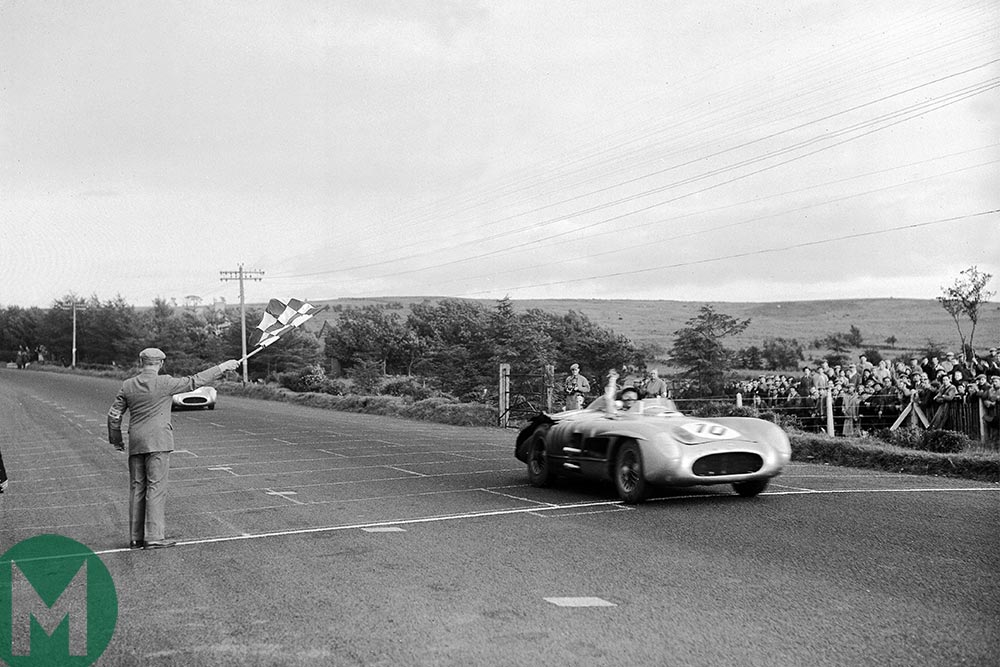 Stirling Moss celebrated his 26th birthday today in 1955 by sharing victory in the 1955 RAC Tourist Trophy, the 50th RAC TT, with John Fitch. Yet it was a race that will be remembered tragically, as Richard Mainwaring, William Smith and Jim Mayers were killed in accidents during the event.

The race wasn’t stopped, and Moss went on to eclipse the field around County Antrim – despite having to withstand a puncture at 130mph.

He managed remarkably to limp the car back to the pits, as the newsreel from the weekend shows below, and recovered to second place in the pouring rain.

As the track dried out he battled the leading Jaguar D-type of recent Le Mans winner Mike Hawthorn, who retired with two laps to go to give Moss the win.

A Hard-Fought Victory for Mercedes-Benz

For the first time the Ulster T.T. became a straightforward, simple race, in which the first car to cover 84 laps of the Dundrod circuit would be adjudged the winner of the Tourist Trophy, presented by the R.A.C. In the past, complicated handicapping systems have invariably resulted in lack of public interest as well as lack of International interest as there was no guarantee that the combination of fastest men and machine would win. With the re-arranged rules the race became a normal free-for-all, and counting as it did for the World Championship for Sports Cars almost everyone entered. To encourage the smaller cars an index of performance was drawn up in which the winner would be the car making the most meritorious performance on calculation. This was achieved by multiplying the average speed of each car by a factor K, this factor being found by adding the capacity of the car’s engine in cubic centimetres to 240 and dividing by the capacity multiplied by 97. This complicated sum giving a figure of merit for each car, the highest being the winner…