The tale of an important Ford GT40, expected to fetch millions at Monterey 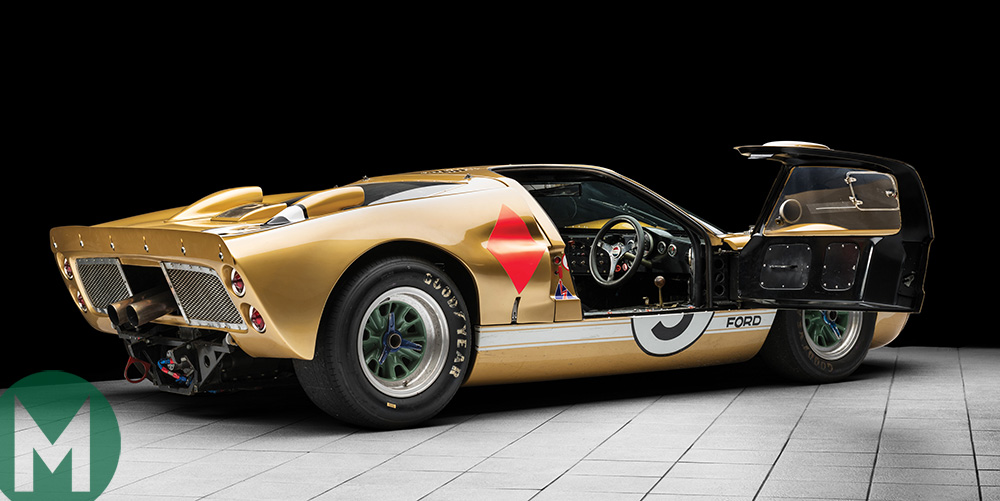 Ford’s journey to Le Mans is a story that needs little in the way of introduction. Neither does Chris Amon and Bruce McLaren‘s victory over Denny Hulme and Ken Miles – in the rulebook, more than on the track – in 1966.

The car that finished in the spray behind, chassis no1016 shared by Ronnie Bucknum and NASCAR driver Dick Hutcherson, probably does.

According to Mark Cole’s Porter Press book on the car, this is one of the most important GT40s of them all. Results notwithstanding.

This was the car that put in the hard yards, the long days and nights pounding the tarmac to iron out any issues with the GT40. Its success in doing so bred the 40-inch-tall car’s immortality and earned a podium of its own.

Bucknum, the man Honda had hand-picked for its Formula 1 programme, shared much of the testing with renowned tinker man Miles for Shelby. Then, with the car delivered to Holman-Moody, it made its debut at the Daytona 24 Hours of 1966 in the hands of Bucknum and fellow Honda F1 driver Richie Ginther. Trialling an automatic transmission, it retired when the experiment failed. The pair’s team-mates, Walt Hansgen and Mark Donohue (making his big-league debut at Hansgen’s insistence) claimed third behind two Shelby GT40s.

At Sebring the following month, AJ Foyt replaced Ginther and the car – now wearing its more familiar gold paintwork, albeit not yet flecked with pink – came home 12th. That would be the swansong for the automatic ‘PowerShift’ transmission.

Come Le Mans, a helmet bubble had been added to the driver’s door and Hutcherson was drafted in to partner Bucknum. He put the car ninth on the grid, fastest of the Holman-Moody cars but four seconds slower than the polesitting Jerry Grant and Dan Gurney car out of Shelby.

A strong start in the drizzle put the car in contention, up to third and clear of the chasing pack until brake problems dropped the car to the depths of the top-10.

By sunrise the comeback was all but complete and by noon there were only 16 cars left on the road. Nine laps adrift but third, Bucknum and Hutcherson navigated the final few hours to cap the famous 1-2-3.

DSJ wrote of the finish: ‘During the last half-hour the two Shelby cars closed up together, Miles waiting for McLaren, who had lost the lead during the final pitstops for refuelling. The light blue and the black 7-litre Fords circulated quietly together, gathering up the gold car of Bucknum as they started what was obviously going to be their final lap and a thoroughly well-deserved victory for Ford, won through pulverising the opposition, even at the cost of heavy losses to their own forces.

‘The atmosphere was still very wet and damp as the survivors toured round on their final lap, endeavouring to arrive at the finish as near to 4pm as possible. By a prearranged plan the Fords of McLaren arid Miles arrived. headlights ablaze, in as near a dead-heat as they could judge, with Bucknum just behind them.’

The following year, Donohue and Peter Revson raced 1016 at Daytona but failed to finish. That was the final outing of the car’s brief competitive career, having been paraded around America to celebrate Ford’s iconic win between times.

Though its final on-track fling would be at the Le Mans test day in 1967, with Donohue setting the fourth-fastest time of the day.

A few years later Holman-Moody donated the car to William Harrah’s expansive Automobile Collection, in 1970, albeit misidentified as 1015 and a new chassis plate to match.

Collector and racer Ken Quintenz spotted the error when he took ownership in 1992, even bringing the car to Goodwood to lead the 30th anniversary celebrations in 1996.

That same year, Holman-Moody was reunited with the car to further fettle the car back to its 1966 best, courtesy of period mechanics Jim Rose and Jimmy Tucker.

It’s now expected to find a new home at Monterey Car Week among the headline lots at RM Sotheby’s auction, predicted to sell for between $9million-$12million.