One has a storied past at Le Mans as the most successful manufacturer in the race’s history. The other is a confident American team that’s not afraid to speak its mind, despite having never raced there before.

Which one is likely to get preferential treatment?

No. It’s not Porsche if you listen to Jim Glickenhaus, whose team will fight for overall victory in this year’s endurance race. He believes that Porsche’s return to Le Mans in 2023 is doomed to fail because it has chosen to build the wrong type of car.

Scuderia Cameron Glickenhaus — along with Toyota and Peugeot — is building a contender from scratch to the new Le Mans hypercar (LMH) regulations, conceived by Le Mans organisers, the ACO.

“Does anyone seriously believe an LMDh will be allowed to win at Le Mans?”

Porsche, however, has chosen a different route: the LMDh regulations, which emerged later from IMSA in North America, and which are based around a standard chassis and hybrid system.

Tweaks to the technical rules and a Balance of Performance (BoP) system are designed to offer convergence, allowing both types of sports car to compete in the World Endurance Championship, including the Le Mans race. There are plans for LMH to compete in IMSA races too. 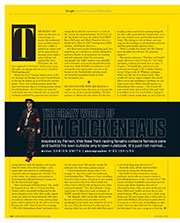 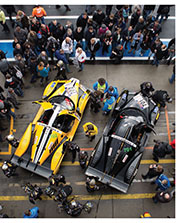 The crazy world of Jim Glickenhaus

The ACO and the FIA, motor racing’s governing body, have stated that they will “ensure sporting equality” but Glickenhaus believes that the performance-levelling measures — in France at least — will favour the hypercars.

“I don’t know and I’ve said this point-blank to the ACO and to IMSA that until fans believe that there is real equality and chance, I’m not sure where convergence is.”

Hypercars will race for the first time in the World Endurance Championship this season, with LMDh car becoming eligible in 2022. Porsche, along with Audi, is expected to join in 2023.

“Convergence is worthwhile — in the old days, guys raced at Le Mans, Daytona and Sebring”

“When LMDh gets thrown into the mix [at Le Mans] it’s going to be very difficult to balance those cars with the hypercars,” said Glickenhaus. “The hypercars will be a lot faster.

“Convergence is a very worthwhile goal. If you go back to the old days, guys raced at Le Mans, Daytona, Watkins Glen and Sebring in a manufacturers championship.

“Today with the split of IMSA and WEC, you really don’t have the same cars racing at the 24 Hours at Le Mans and then at Daytona. To be very honest, we feel that convergence should have been one set of specifications from day one for the top class at Le Mans and Daytona but it wasn’t to be. IMSA decided to go down their own road.”

This year, Glickenhaus will be one of only two teams running hypercars on the grid in WEC and at Le Mans. It faces Toyota with its own contender, as well as Alpine, which is running a restricted LMP1 car from last season.

“I think it’s very strange that Glickenhaus, this tiny company, will be at Le Mans with a car that it designed and engineered itself, built it from the ground up including the chassis, but companies like Ferrari, Porsche and Audi won’t be,” he said. 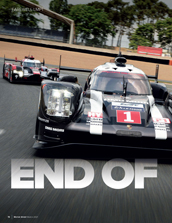 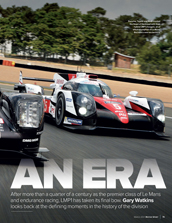 End of an era at Le Mans: the decisive moments of LMP1

2008: The greatest Le Mans heist Audi driver Tom Kristensen reckoned Peugeot had “given us a bit of a smacking” at the 2008 Sebring 12 Hours. Another victory a…

“Even when Porsche, Audi and Acura join, are those really Porsches, Audis and Acuras or are they Orecas with spec hybrid system and branding bits? To me, it’s a little strange.”

The route to new regulations, which replace the LMP1 category has not been smooth. The hypercar category was announced in 2018, with Ferrari, Ford and McLaren among those interested. But the emergence of the lower-cost LMDh category a year later changed the landscape.

Aston Martin paused its hypercar project and the decision made for a difficult incubation period at Glickenhaus.

“The rules have been twisting and turning and changing,” said Glickenhaus. “When it first started we were hopeful that we could use an Alfa Romeo engine. Then the horsepower situation changed drastically to accommodate Aston Martin and then they went up in smoke and disappeared, so once again the rules had to be changed.

“By that point, you needed a total combined output of around 870hp, which we couldn’t make with the Alfa Romeo engine.

“We were forced to look elsewhere and we found Pipo – who are a terrific engine builder. They’ve built WRC engines that have won a championship for many years.”

Joest Racing, which has 15 overall Le Mans wins, is also on board supporting both Glickenhaus entries. It will supply equipment and people to the team’s maiden WEC campaign, as the team looks to upset the reign of Toyota, placing its faith in the BoP scales.

“If you’re eagle-eyed you will spot that BoP has already begun,” Glickenhuas claimed. “If you look at the specifications of the Toyota car, it’s 1040kg and our car will definitely be at the 1030kg mark that was initially announced. They’ve already added 10kg to Toyota because they know it’s going to be faster.

“We’ve simulated Le Mans in our car, as has Toyota, and the ACO’s target time of 3mins 30sec is something that both of us will both be able to hit.

“We’re very happy with the Hypercar rules and believe that the ACO will give us a fighting chance. The ACO will be very fair and will BoP everybody so we think we’ll have a chance, as will Alpine.”

The team was set to miss the season-opening 1000 Miles of Sebring due to travel issues arising from the Covid-19 pandemic, but that is no longer the case.

With Sebring cancelled for the second year in a row, its SCG 007 LMH will be christened at Portimao in April alongside its rivals.

After the round in Portugal, Spa is the final race ahead of endurance racing’s biggest event and one that Glickenhaus has been anticipating for a long time.

The American team has plenty of endurance racing experience at the Nürburgring and Baja 1000, but thoughts of Le Mans have never been far away.

“It’s always been a dream of mine to go to Le Mans so when this magic moment in hypercars came up, we were really the first company to say that we’re going to build a hypercar and compete.

“I remember the incredible battles of the ‘60s and I remember people like Carroll Shelby, Jim Hall and of course, before that, Briggs Cunningham, bringing American cars to Le Mans and racing them.

“This is performance art. I always wanted to go to Le Mans to stand there in the rain and watch a car at three in the morning with our name on it go by. That’s what I want. We will do our best to have a really respectable result. Could we win? It’s not impossible. More than that, it will be a magic moment.”

Ahead of the Portuguese round, the team will have a final once-over of both its hypercars in a private test at Vallelunga before setting off on the road to Le Mans.