Paul Fearnley looks back on the formative 904 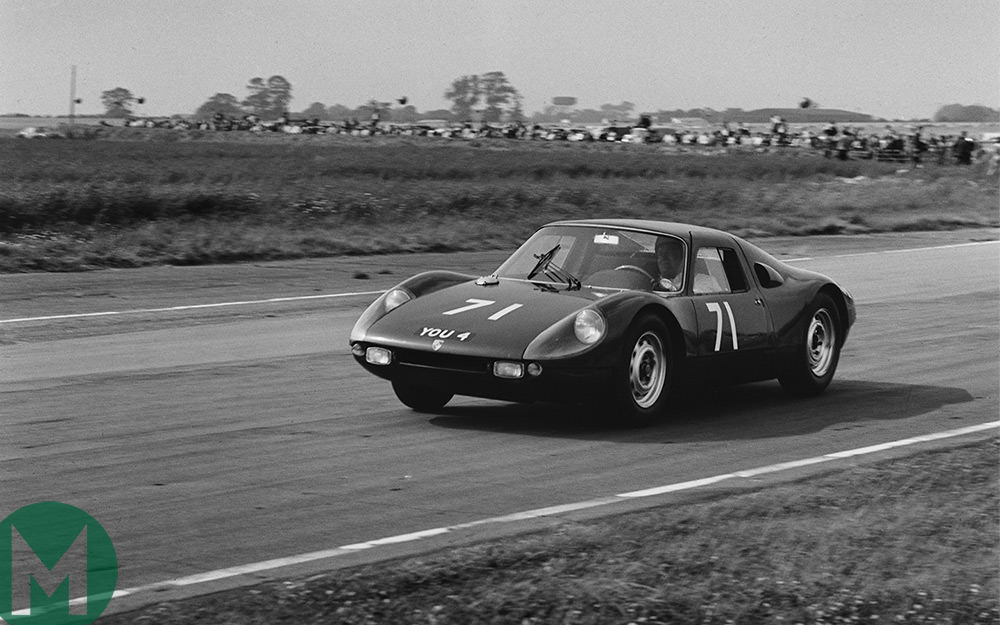 Eight of the model that sired the greatest line of sports-racing cars will compete this weekend at Goodwood’s 76th Members’ Meeting.

Porsche’s 904, aka Carrera GTS, of 1964 was a milestone, a new design philosophy, that marked a return to the Stuttgart marque’s racing roots after its dalliance with single-seaters had borne fruit without pulling up stumps.

Constructed on a tight budget – hence its spot-welded pressed-steel ladder frame of rectangular section, moulded and bonded GRP body (by Heinkel) and carried-over air-cooled quad-cam 2-litre flat-four – more than 100 were built for Grand Touring homologation purposes and sold at a knockdown DM29,700.

Lightness (650kg), allied to reliability and adaptability, were its strengths and within months it had won the Targa Florio.

And in January 1965 it finished second in the Monte Carlo Rally.

The latter was achieved by a Mercedes-Benz stalwart co-driven by the mechanic who had survived the September 1955 crash that killed James Dean: Eugen Böhringer and Rolf Wütherich.

On a snow-hit event that was the province of front-wheel drive, Böhringer was one of the last to make it through the blizzard and drifts that set in and settled from Chambéry onwards: only 35 of 237 starters reached Monte Carlo.

He was also one of just two – the other being Saab’s Erik Carlsson – to clear the final 380-mile section in the mountains overlooking the principality.

In the factory car, chassis 006, that had finished second in the 1964 Targa. Its only concessions to rallying being raised ride height and lowered gearing.

Oh, and a petrol cockpit-heater designed for WWII tanks.

That Targa win had been achieved by a Palermo aristo co-driven by a British ex-pat: Baron Antonio Pucci and cool, calm, collected Colin Davis, son of 1927 Le Mans winner Sammy.

Porsche had anticipated that victory would go – in the absence of Scuderia Ferrari – to one of its flat-eight prototypes: an adapted 904 shared by Umberto Maglioli/Edgar Barth and a proven 718 RS Spyder.

Sure enough the latter was leading after the first of 10 laps – but retired on the second when a broken driveshaft stranded Jo Bonnier in the mountains and marooned co-driver Graham Hill in the pits.

904/8’s spell in the lead was ended on lap five by a broken spring unit.

By which time Davis had replaced Pucci in 005 and gone on a tear. By the end of the sixth lap he was leading by five minutes from Dan Gurney, working wonders in a grossly unsuitable and gradually failing Shelby Cobra, and his seventh lap – 41min 10.4sec – was the race’s fastest.

Pucci reeled off the final three and their winning margin was more than 12min.

The first 904 in Britain, it was registered YOU4, painted (uniquely) Irish green and fitted – once a logistical snafu had been hurriedly rectified – with gearing to suit the sweeping flow of Goodwood.

Stoop had throughout the 1950s been a Frazer Nash devotee – in Mille Miglia, Sebring and Le Mans Replica models – before switching allegiance, as had Frazer Nash, to Porsche.

His Goodwood connection stretched back to WWII when he and Squadron Leader Tony Gaze were the first to see and experience (in their MGs) the potential of the metalled perimeter road laid at RAF Westhampnett by Group Captain Douglas Bader, a close friend of Stoop’s family.

He used his 904 in Europe in 1964 – at the Nürburgring, plus the Rossfeld and Freiburg hillclimbs – as well as Britain: Silverstone, Brands Hatch and Snetterton.

Its best result, however, was scored at Goodwood in August.

Stoop led the first three laps of the 2-litre GT race that supported the RAC Tourist Trophy before finishing runner-up to GP driver Mike Spence in The Chequered Flag’s Lotus Elan and ahead of Mike de’Udy in Don Moore’s 904.

Stoop was an entrant, too. It was his privateer DW Racing Enterprises’ Formula 1 Lotus 33 that Paul Hawkins plunged into the Monaco harbour in 1965.

But it was while driving his 911S, also registered YOU4, at Croft in May 1968 when Stoop suffered a fatal heart attack.