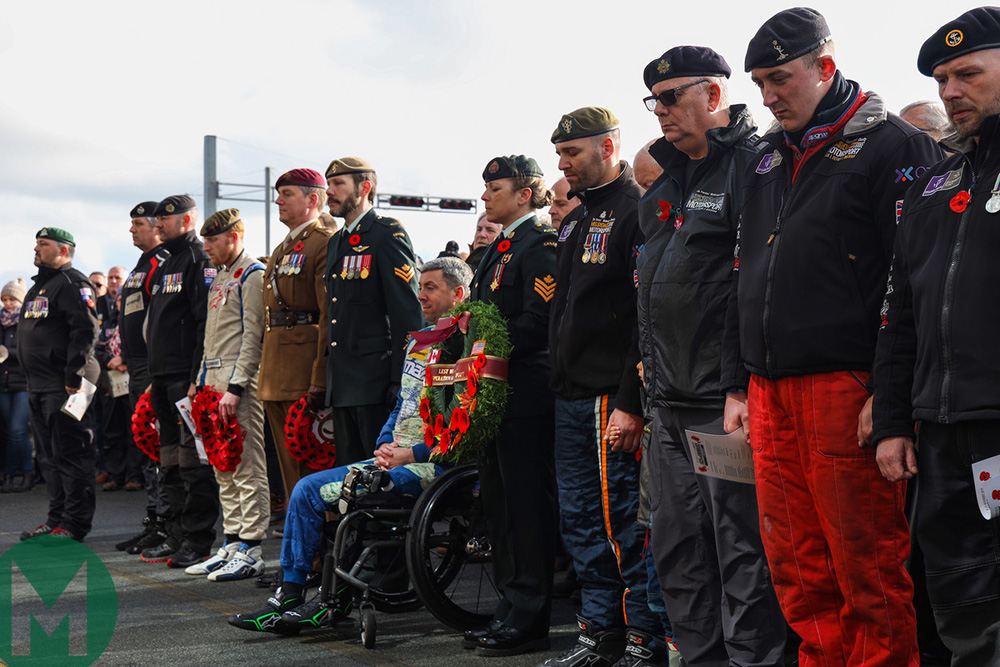 It was the strangest thing. As you will either know or will be able to imagine quite easily, the Anglesey Circuit is a fairly wet and wild place in November.

But this year at Mission Motorsport’s annual 12-hour Race of Remembrance it reached new levels of inclemency. The rigid-framed marquee had to be evacuated on Friday night, briefly throwing the Heroes Dinner for 450 guests into doubt. As for the race itself, and right up until Sunday morning, track conditions varied from damp and greasy at best to so flooded drivers fell off trying to keep up with the safety car.

Rain came at you at 90 degrees, which, when you’re in a car without side windows, is not helpful. And yet, when we gathered in the pitlane at the 11th hour of the 11th day of the 11th month to remember, 100 years to the minute after the cessation of hostilities that brought the Great War to an end, the skies cleared, the sun shone and the winds abated.

I’m not saying this was any form of intervention, divine or otherwise, but you can’t say it wasn’t strange.

So we stood, at least those of us who could, and remembered. As an outsider who’s never done anything braver than trap a moth under a plastic cup, I looked on in awe at the hundreds of serving personnel gathered there and veterans. All were beneficiaries of Mission Motorsport’s incredible work, many with terrible physical handicaps you can clearly see, all with mental injuries you cannot, and which are often far harder to understand, treat and resolve. For many it is simply not possible.

But some do spectacularly well. Take my old team-mate from last year, former paratrooper Andy Jones who, like my other co-drivers, was injured by an IED. Those who remember the stories run in Motor Sport at the time might recall that after his medical discharge Andy’s life fell apart. He ended up living out of bin bags.

Then came Mission Motorsport, the Race of Remembrance and a little spin on his first lap of qualifying that so nearly sent him tumbling back down into the darkness. But the team talked him round, put him back in the car and he drove faultlessly. It was a still fragile but rightly proud Andy who drove the car over the line to finish the race.

Spool forward a year and Andy is back, grinning from ear to ear with a new job helping civilians who are struggling on the inside, with a new home, and a settled family life. This time, in weather that was far worse, he never looked like losing control of a car that was 10 times more difficult to drive.

That car was a Mazda MX-5 Global Cup Car delivered the day before the race, having never turned a wheel in anger in its life. Joining Andy and me was another team-mate from last year, Commando Paul Vice (the most injured man to survive Afghanistan), and newcomer US Marine Liam Dwyer racing courtesy of MM’s North American cousin, Operation Motorsport. Liam had his left leg torn off above the knee and suffered such extensive injuries to the rest of his body that it’s taken 50 operations to put him back together. So far. Liam Dwyer really shouldn’t be alive.

I’d like to tell you tales of derring-do about the race itself, but the truth is that while the car had great potential, we had no time to do anything more than the most rudimentary of set-up work to tune it for the circuit and conditions, and we were hobbled by tyres that would have been ideal for Laguna Seca in July.

We just did our best, slithered through our stints, the Brits going first, second and third, before the propshaft bust on Liam. It was a prototype part needed because his left leg meant it made sense for us to run a Sadev sequential race gearbox that only requires a clutch in the pitlane.

The good news was we had a spare, the bad news was we were already using it, so that was it. We repaired to the bar where the veterans told stories that on more than one occasion quite literally made my jaw fall open.

More: At the going down of the sun and in the morning, we will remember them

However Mission Motorsport is not known for quitting, which is why Liam and I may have started the race in a Mazda MX-5, but we finished it the next day in a diesel Honda CR-V. Yes, really.

Vice and Jones got a Citroen C1.

As I listened to the commentary of the Brazilian Grand Prix for some of my journey home I realised I had done something in racing terms that weekend I doubt anyone at Interlagos could claim: I had taken part in a motor race of life-changing importance to many of its competitors and crews. Jones, Vice and Dwyer will all tell you racing is part of the reason they are still here today.

For them, and with the support of the likes of Mission Motorsport and Operation Motorsport, it has helped transform their lives and those of hundreds of other beneficiaries. Which is why whatever next season brings, I’ll be back in the wind and the rain of Anglesey in November. I hope to have something to race, but if I can be of most help changing tyres or manning a fire extinguisher, that’ll be just fine too.