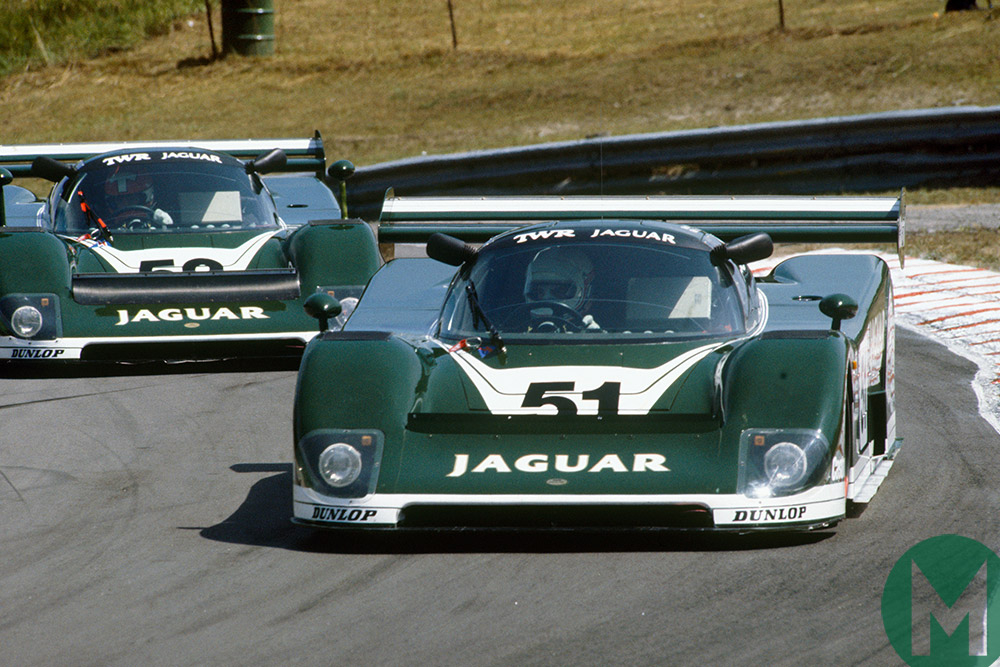 Two cars that took racing green to new heights: a Lister-Jaguar “Knobbly” that made the sports car so covetable, and a Jaguar XJR-9 that started a winning trend. And they could both change hands for millions at Bonhams’ Bond Street Sale on December 1.

It uses Jaguar power in a Lister chassis and ‘NBL 600’ was something of an evolution over the previous iterations.

Peter Whitehead, winner of the 1951 Le Mans 24 Hours, bought this chassis (BHL 103) and put in large cooling vents behind the front wheel arches, replacing the existing Morris Minor steering rack with an XK140/150 rack-and-pinion. Apparently, its first outing resulted in a meeting with a garage wall – steering left pulled the track-rods right and vice versa – as the XK140 system was fitted upside-down!

Whitehead died in September 1958 while navigating a Jaguar 3.4 saloon at the Tour de France and the “Knobbly” was sold to Derek Wilkinson, who upgraded the 3-litre engine to a 3.8-litre Jaguar that produced around 300 horsepower.

It’s no wonder that this “Knobbly” changed hands numerous times for historic sports car races after 1962. Shaun Lynn took care of it for a number of years, having purchased it in 2010, and Dario Franchitti gave it a public appearance at the 75th Goodwood Members Meeting in 2017.

A pivotal part of Lister’s sports car history, this “Knobbly” is expected to sell for up to £2,800,000 when Bonhams offers it at Bond Street on December 1.

More: The cat without a cat

For the same money, one could go for the 1985 Jaguar XJR-6 World Endurance Championship racer. Sporting a different shade of green, it was powered by a V12 engine and entered by Tom Walkinshaw Racing.

Only nine were built – this one offered being the first. On their debut, the XJR-6s took the fight to the Rothmans Porsches at the 1000Kms WEC-qualifying race at Mosport in August 1985, qualifying third and fifth with Martin Brundle leading at one point – only to retire as the suspension couldn’t bear the load of the downforce.

Brundle swapped to drive the sister car – this car offered – to take third with Mike Thackwell and Jean-Louis Schlesser, behind the pair of Porsche 962Cs. It wasn’t a successful season by any means, but lessons were learned for ’86.

TWR became serious challengers for the 1986 World Sportscar Championship with Eddie Cheever/Derek Warwick winning the Silverstone round and taking third in the championship in the Silk Cut-liveried XJR-6.