Back in 1977 Patrick Tambay won the Can-Am championship with Carl Haas’s team, thus earning himself aFormula 1 ride with McLaren for the following year. Tambay drove for McLaren in 1978 and ‘79, paired with James Hunt and John Watson respectively, but during those years the team’s performance steadily tailed off. 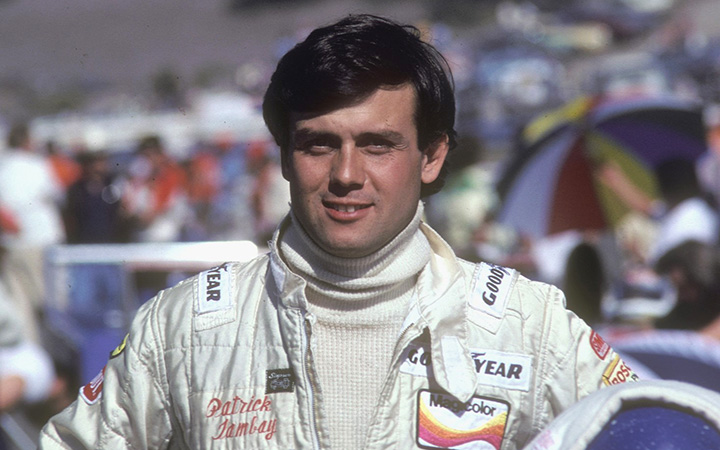 In 1979 Tambay drove no fewer than five different chassis types – the previous year’s unsuccessful M26 and three variations of the equally unsuccessful M28 and an M29 too. Patrick did not score a single point in ‘79 and Teddy Mayer and Tyler Alexander, who owned McLaren at the time, began to feel pressure to perform with the increasing spectre of Marlboro’s successful Project 4 F2 team owner Ron Dennis getting his ducks in line to buy into and take control of McLaren. 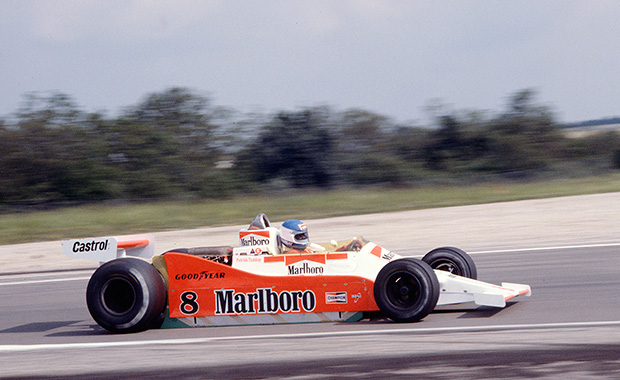 “In ‘79 McLaren had a poor chassis and it was very frustrating,” Tambay recalls. “I could have tried to stay on for the following year but I didn’t feel that I had the back-up and confidence from Teddy Mayer. The operation was changing and they didn’t believe in me anymore. So things were not looking so exciting and then Carl called and said, ‘if you’re free, come back home.’ It was music to my ears.”

An entirely new Lola Can-Am car was designed by Eric Broadley for 1980 with Frenchman Robert Joulet doing the aerodynamics. Called the T530, the new Lola typically required a lot of work. “The car was an aerodynamic disaster,” remarks Tony Dowe who was Haas’s crew chief in those days. “It was a joke really, built to make profit. But we had a fantastic team and really good people. We raced hard and we partied hard, and Tambay was terrific. He wanted to get his F1 drive back and he did a tremendous job.

“We had Mike Sales, Bob Skein, Carl Azavedo and John Szymanski, an absolutely fabulous bunch of guys. We had two Can-Am cars and five people to do two cars. Everyone worked tremendously hard and they did it with great spirits too. Today, you wouldn’t take something like that on with fewer than 25 or 30 people.” 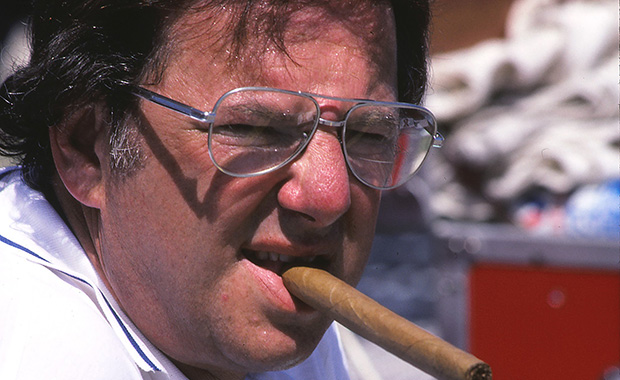 For his part Tambay was excited to be back with Haas’s team after two frustrating years in F1 with McLaren. “The 1980 Can-Am season was a duplicate of the ‘77 season, but with a different car with different handling characteristics,” Tambay observes. “It was a less exciting car to drive but the results were exactly the same. For me, it was an ongoing love story and we started where we had left off in ‘77.”

Confirming Carl’s confidence in him, Tambay won the first four Can-Am races that year at Sears Point, Mid-Ohio, Mosport and Watkins Glen. At the Glen, Tambay ran into a string of problems but was able to hang on to win. But before the next race at the end of July at Road America, Tambay telephoned Haas to tell him he had injured his stomach while competing in a bicycle race and wasn’t fit to drive at Elkhart Lake.

“Everybody was saying the car was so good and it was easy for him,” Tony Dowe says. “So he wanted somebody like Alan Jones or Mario to drive the car to show that the car wasn’t that good.”

Haas replaced Tambay at Road America with no less a man than Mario Andretti, who didn’t like the car and complained to Broadley. Andretti told Broadley the T530 wasn’t very pleasant to drive and needed new suspension geometry. Meanwhile, Tambay was back in business at the next race where he won again after a fierce battle with Al Holbert. 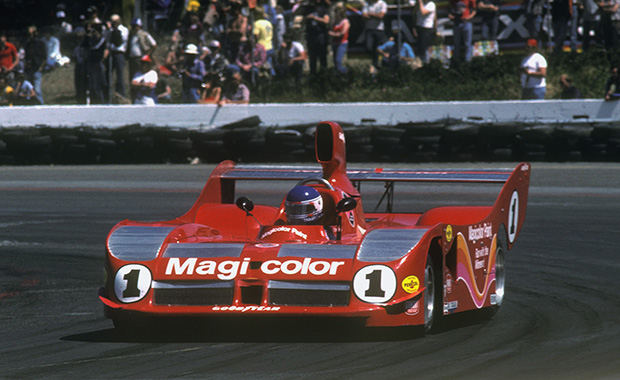 “Patrick came back for the next race at Brainerd and won through sheer ability,” Dowe grins. “It was awesome. Holbert had a quicker car and we made a screw-up in the pitstop but Patrick won. It was an awesome day. That was Tambay at his very finest.”

At Trois-Rivières, Quebec in September, Tambay played a joke on Haas. Patrick’s friend Gilles Villeneuve was on hand that weekend, taking a break from his F1 adventures with Ferrari to watch over his younger brother Jacques in the accompanying Atlantic race. On Saturday night Tambay and Villeneuve went to a local stock car race to have some fun and the next morning Tambay walked into the pits with a cast on his arm.

“That was one of the only jokes I played on anyone in the business,” Tambay remarks. “But I felt I could do it because the relationship was so special. Carl was not too eager about me going to the stock car race the night before. He was worried I would hurt myself. So I went into a shop and found a fake cast for my arm. When I arrived at the track that morning I put it on and gave Carl a hard time for a few minutes.”

Adds Tony Dowe: “When Carl saw him, he nearly died. He just went white. Bobby Rahal was right there wanting to get the drive and Tambay was very serious for a few minutes. But then he broke into a grin and pulled his rubber cast off. It was a great joke.” 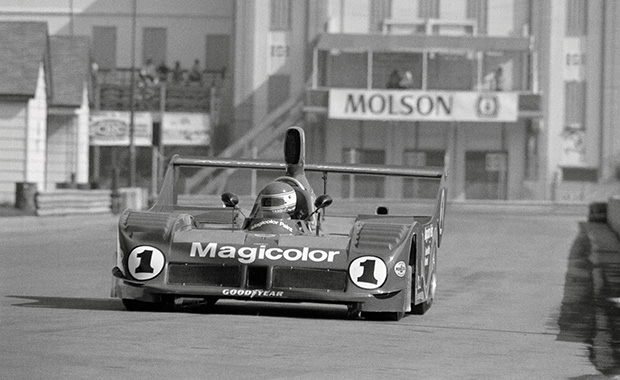 Nor was the race a laughing matter as Tambay struggled to change gears with what was left of the broken stub of a lever. “Patrick made a bad start and got half-spun and broke the gear lever, which was a crappy piece of material,” Dowe relates. “When he came past the pits at the end of the first lap he threw the gear knob at me. After the race his hand was completely destroyed, but he won because he had to. That was the difference.”

With only the two west coast races remaining at Laguna Seca and Riverside, Tambay had all but wrapped-up Haas’s fourth consecutive Can-Am championship, but Tambay did not finish at Laguna Seca after an engine fire. Going into the season finale at Riverside Tambay led Al Holbert by eighteen points so it was all about being conservative and finishing the race.

Tambay finished third at Riverside behind Holbert and Elliott Forbes-Robinson in one of Paul Newman’s Lola T530s. Keke Rosberg ran the last two Can-Am races in 1980 at Laguna and Riverside as EFR’s team-mate in place of Stephen South who had been badly injured at Trois-Rivières. Rosberg finished second at Laguna Seca and was fourth at Riverside. “The T530 wasn’t brilliant,” Rosberg recalls. “It was a bulky car and it wasn’t that good.” 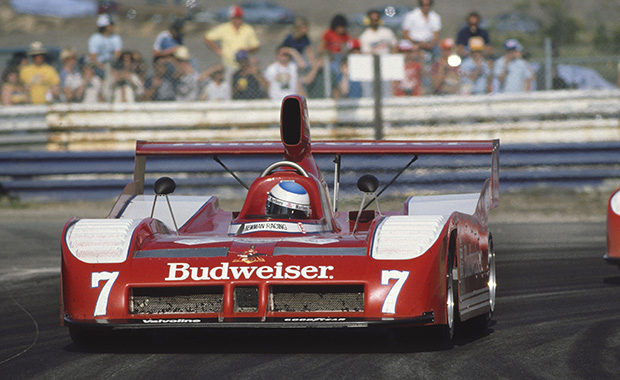 For his part, Tambay savours fond memories of his two successful Can-Am seasons with Haas’s team. “I remember having breakfast with Carl’s cigar before going to the track on Saturday or Sunday morning while we drank coffee and ate hash browns with the eggs sunny side up. Carl had the authorisation to light up his cigar in the coffee shop. Maybe that’s why his drivers performed so well, because he was smoking a cigar with them at breakfast on Sunday morning. I remember flashes of things like that and also Carl’s wig floating in the pool after the last race of the championship!

“The team was very professional and had a great attitude with lots of jokes and humour in the middle of lots of hard work,” Tambay adds. “But the relationship was probably stronger than all of that because of the results we achieved together. I’m not the only one Carl and Berni had a strong relationship and ties with. I’m sure Jacky Ickx, Alan Jones, Brian Redman, Mario and Michael Andretti, Sebastién Bourdais, and many others, all had some special relationship with them.

“As far as I’m concerned, Carl and Berni are great human beings. I still enjoy opening their Christmas cards and seeing they are still kicking and as passionate as they were in the old days, even if things have slowed down a little bit for all of us.”