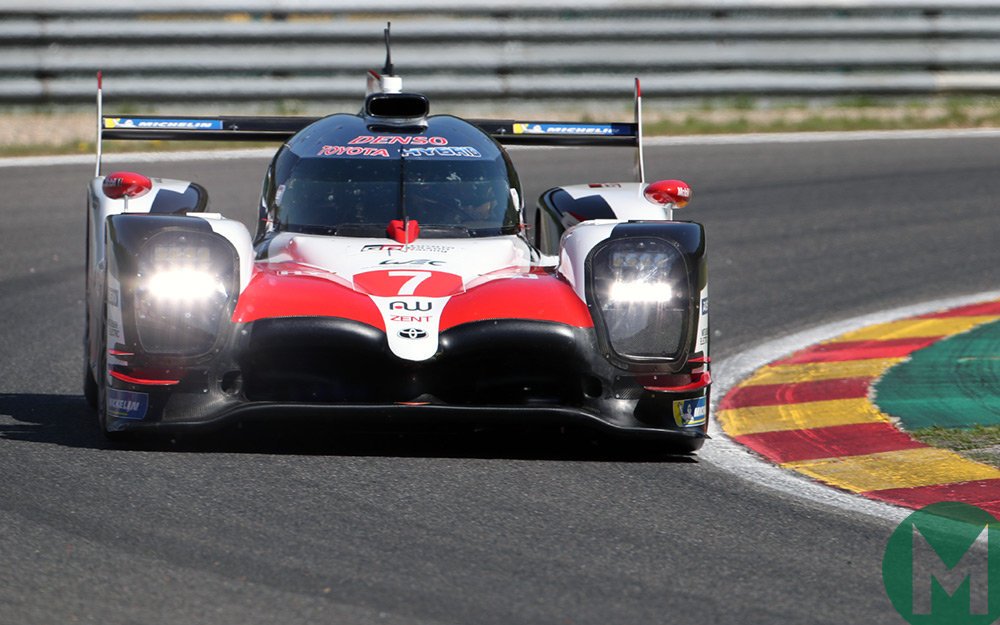 Update: Following an incorrect declaration of fuel flow meter, the no7 Toyota has been stripped of its pole position. The sister car of Fernando Alonso, Kazuki Nakajima and Sébastien Buemi will now start the Sp 6 Hours from pole ahead of the first of the Rebellions.

The no7 will start from the pitlane after the last car has completed the opening lap.

The session was halted twice, as first the SMP Racing BR01 of Stephane Sarrazin stopped on the Kemmel Straight before Pietro Fittipaldi hit heavily at Raidillon in the similar Dragonspeed car. The young Brazillian was taken to the medical centre following the heavy impact with suspected leg fractures.

Rebellion Racing led the privateer field, with Bruno Senna and Neel Jani combining for third ahead of Thomas Laurent and Gustavo Menezes, who finished 2.4sec adrift of pole.

SMP Racing’s Mikhail Aleshin and Vitaly Petrov, who will be joined by Jenson Button from Le Mans onwards, secured fifth ahead of the ByKolles.

Manor Racing’s weekend has been surrounded by intrigue, with the team failing to set a time all weekend and refusing to be drawn on why. A statement from Ginetta has confirmed the team’s withdrawal following lack of payment from the team’s backer CEFC.

The only non-Orecas in the field, the Racing Team Nederland Dallara and Labre Competition Ligier complete the prototype grid.

In GTE, Ford carried its impressive Prologue pace into the opening qualifying session of the year by claiming the front row of GTE-Pro.

Andy Priaulx and Harry Tincknell combined to just shade Olivier Pla and Stefan Mucke by 0.083sec. The Porsche of Gianmaria Bruni and Richard Lietz briefly split the pair but will line up third – just four thousandths further back – alongside the fellow Porsche of Michael Christensen and Kevin Estre.

António Félix Da Costa and Tom Blomqvist claimed the honour of being the fastest of the new GTE machines, their BMW claiming fifth ahead of the fastest of the Ferrari ‘Evo’ 488s of Alessandro Pier Guidi and James Calado. Team-mates Sam Bird and Davide Rigon line up seventh alongside Maxime Martin and Alex Lynn, the fastest Aston Martin.

BMW’s Nicky Catsburg and Martin Tomczyk start ninth alongside the second of the Aston Martins.

The Proton Porsche claimed pole in Am, just three-tenths slower than the slowest of the Pro field.