Jean-Pierre Jaussaud, who raced in 13 Le Mans 24 Hour races and won twice, has died at the age of 84.

The Frenchman won Le Mans for the first time in a Renault-Alpine A442 alongside Didier Pironi in 1978.

In a famous celebration, the pair drove the winning car down the Champs-Elysees in Paris in front of a cheering crowd.

Jaussaud would go on to partner with Jean Rondeau for another legendary win in 1980, as the privateer team emerged victorious at La Sarthe.

Jaussaud, from Caen, in northern France, is understood to have died from a heart attack on the night of July 21.

Born on June 3, 1937, the son of a shopkeeper, Jean-Pierre Jaussaud’s passion for racing was ignited by the 1950s races held in the centre of Caen, which brought racing’s big names, including his hero, Stirling Moss.

Jaussaud began racing in the early 1960s won the 1963 Volant Shell scholarship with the Jim Russell school at Many Cours. The prize consisted of a Cooper-BMC F3 car for the next season.

Impatient to compete as soon as he collected the car from Britain, he was pointed in the direction of Goodwood when he asked John Cooper if there was a race he could enter.

Speaking to Motor Sport in 2006, Jaussaud described how he bungled the start, which left him last at the first corner, but by the end, he had climbed to eighth in a race won by Jackie Stewart on the Scot’s F3 debut.

Judging by how far the man holding the microphone-on-a-stick jumps back as the car fires up, our fervent hope that this Le Mans-winner's turbo V6 might not bust today's noise…

Back in France, he won first time out at Pau, and finished third in the championship, going on to finish in the top three at every subsequent F3 championship of the 1960s.

He also raced in Formula 2, where he survived a violent crash at Monza in 1968, when his car rolled and threw him clear.

He recovered from a broken leg to win the F3 title in 1970. Jassaud then moved up to Formula 2 full-time from 1971 but his single-seater career began to stall, with a third-place finish at Pau the highlight of the season.

“Pironi was glad to be quicker, and I was happy for him to feel that way”

Plans for a Formula 1 drive never materialised and so he turned to sports cars.

He first raced at Le Mans in 1966 and 1967 with Henri Pescarolo, and became a race regular in 1973 when he and Jean-Pierre Jabouille finished on the podium in a Matra-Simca. Another podium came two years later in the Gulf-liveried Mirage-Ford.

And then Jaussaud joined the Renault Sport juggernaut for 1977, firstly in a testing role and then as part of the starry driver line-up that included Derek Bell, Jean-Pierre Jabouille, Jacques Laffitte and Patrick Tambay. 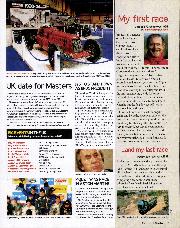 Cooper T72. Goodwood. 1964 by Jean-Pierre Jaussaud Jim Russell opened a school at Magny-Cours, and I won a Cooper-BMC F3 car. I had to collect this car from England and…

The A442 was fast but melted pistons on the three cars, that had been running a comfortable 1-2-3 at one point, ended French hopes.

The next year, after a winter honing reliability and improving performance, Jaussaud returned to Le Mans with a modified A442, alongside Pironi who needed managing as much as the car.

“I was there to fight against Porsche, not against my team-mates or my co-driver,” he told Motor Sport in 2003. “Naturally, Didier wanted to be quicker than me. If I went quicker he would respond, so I held back so that he would do the same. He was glad to be quicker, and I was happy for him to feel that way. I had a good feeling, too: the car was bloody quick, and it was very stable.”

The pair were running second when the leading Renault-Alpine, driven by Jabouille, retired with a seized engine. Promoted to the lead, Jaussaud and Pironi held on for the win. 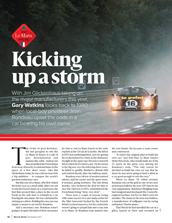 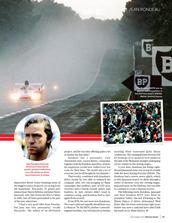 The story of Jean Rondeau, the last garagista to win the Le Mans 24 Hours, is a tale of grit, determination and against-the-odds endeavour that propelled the Frenchman from near-obscurity…

Jaussaud claimed a French Production car championship title the following year and then paired with Jean Rondeau who was driving his self-built Ford M379B in 1980.

They triumphed in a battle with the Joest Racing Porsche 908/80, despite a starter motor glitch in the closing stages that forced Jaussaud to stay on slicks as it started raining. He spun on the last lap, but crossed the line in the lead to take the last win for a privateer car at Le Mans so far.

Further races with Rondeau were less successful, but Jaussaud continued racing into the 1990s, entering the Paris-Dakar eight times before finally hanging up his helmet in 1992.