It might not be Toyota swooping into the Peugeot-shaped void, but Ginetta’s commitment to make 10 LMP1s offers a much-needed boost to the ACO, organisers of the 24 Hours of Le Mans.

Audi’s departure has raised questions over the future of the class, and doubts remain over Toyota and Porsche’s long-term commitment. If a two-manufacturer top category isn’t opportunity enough for the privateers to score big in the world’s greatest race, remove Toyota or Porsche from the equation and success is almost assured. Build a car designed by Adrian Reynard and Paolo Catone, with more expected to join Ginetta’s development team, and the odds look even better.

Ginetta is no stranger to the top of sports cars, pairing with Zytek as recently as 2010 – when Nigel Mansell crashed out barely a few laps into the Le Mans 24 Hours and promptly packed up and went home. Ever since, Ginetta’s focus has been on reinforcing its GT ladder before expanding into LMP3 in 2015. Last year it failed in its bid to land one of the four LMP2 chassis contracts.

“It was obvious to divert those LMP2 resources to P1,” Ginetta owner Lawrence Tomlinson says, with Le Mans logos plastered across his shirt and back. “We’re not a Formula 1 team and never will be so the highest level for us is LMP1. It’s been very obvious that the ACO wants to encourage people into LMP1 and the regulations look good.”

Work is being done to close the gap between the LMP1 factories and the privateers, and the implication is that it will be closer come 2018. Privateer P1 may well be the long-term future of the class. “They’re keeping it named LMP1 rather than LMP1-P or L, that was certainly the instruction we got from the ACO. We’re going to be running as close to the LMP1-H cars as possible and right from the get go you’re going to be looking at overall podiums in WEC and Le Mans itself.”

Audi’s departure hasn’t hastened the move. “No, but when we first came across the Diesel-gate situation we wondered what VAG would do with its motor sport resources. We were not surprised to see a reduction in the programmes.”

Ginetta’s ties to the ACO are strong, having carried the full weight of the fledgling LMP3 class on its back for that difficult first year in 2015 – five cars made it to the opener at Silverstone, all Ginetta, the fifth completed with minutes to spare, the glue barely dry. Like now, it was a case of opportune timing for the company.

“The ACO came up with the LMP3 idea and that coincided with the project we wanted to do. We were already going to do a carbon tub car. I’d bought Juno from Ewan [Baldry, Ginetta’s technical director] and integrated it into the business. At that point it became obvious for us to do a carbon-tub prototype car, whether that was a CN car or CN-plus car. The G57-P2 is where we would have got to, and we had the P3 project along the way.

“It showed the ACO that Ginetta had moved on technically, we were able to deliver the project in ‘world record time’ and make a lot of people happy. It opened up a whole new area, strengthened a good relationship with the ACO, it opened up the supply chain, and got rid of the bugs around us – it also made it clear that we didn’t want to work with Oreca.” 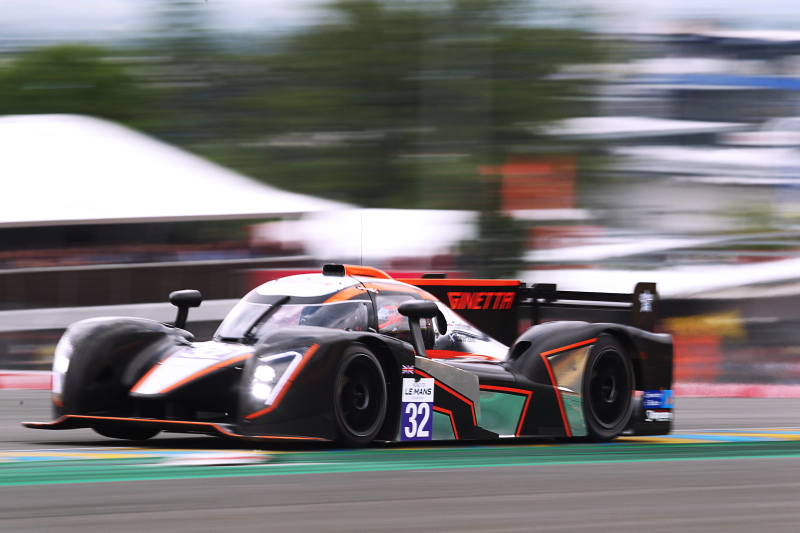 When the relationship broke down with Oreca, attention eventually turned to the car they originally planned to build. The factory-designed and produced G57-P2 advanced on the LMP3 car without the restrictions of competition rules. A bigger 6.3-litre Chevy engine and Xtrac gearbox have helped the car match LMP2 pace for a fraction of the price.

Reynard, an old friend of Tomlinson’s, has been attracted for this next project because, “he’s really excited about entering open-aero racing again.” And former Peugeot designer Paolo Catone will only improve on the in-house talent.

So far only Manor has shown its hand and announced its intention step up and run with Ginetta in 2018. ‘With’ is the key word; Manor will be a partner of Ginetta, not customer, Tomlinson stresses.

“We’re looking to do 10 cars,” Tomlinson explains. “That really allows you to support six cars running in WEC and at Le Mans. We’re doing six that will run, plus the mule to do initial testing on the drivetrain, which only leaves you three spare tubs – so one per team.”

Despite having young talent such as Charlie Robertson contracted to the team, Tomlinson has resisted the urge to keep a car back for a works team. “It would detract from the customer programmes. The teams we’re going to be working with are high level, who will be demanding in their technical requests and we have the abilities to deliver with our team.”

While the run of 10 is set, with no intentions to expand on that regardless of interest early on, what will power the LMP1 is not. Gibson, which will be in the back of the new LMP2s, has an outside shot. “I wouldn’t rule Gibson out but there would be quite a lot of work to do on the engine. The numbers are fairly low-volume so it could be cost-prohibitive. Really, the P2 engine is 600bhp maxed out. They could turn it up but I don’t know where that would be in terms of reliability and I don’t think naturally aspirated is possible looking at the efficiency you need on fuel.

“I think whichever way we go it will almost certainly be turbocharged. We’ve been in detailed discussions with Mechachrome, Adrian’s been speaking to Honda, but there are other engine suppliers who are interested in speaking to us about using their unit. It’s a very, very key decision and one that has to be made probably within the next month.”

Tomlinson expects the car to be on track in August at the latest, ready for the 2018 season. Russian squad SMP Racing is switching its custom-built and now ineligible BR01 LMP2 to a P1, with others reportedly eyeing the class. But Ginetta has become a specialist in quick turnarounds, which may leave Ginettas racing Ginettas for LMP1 privateer honours come Silverstone 2018. And thus carrying a class again.

“I’d be surprised if anybody else was out for then. As always, we welcome competition, we were delighted when Ligier came into LMP3. You don’t want to be racing yourself.”

Should Porsche or Toyota, or hopefully both, remain, LMP1 could resemble the fractured class of the mid-2000s, when Pescarolo courted fans with underdog dreams.

Come 2018, Ginetta may have three times the chance to succeed where the great Henri (and to a lesser extent Rebellion Racing, as many quietly hoped in 2016) ultimately failed.