There was a moment, just briefly, where you finally saw the acceptance etched on his face. As the onboard camera replayed the moment Ash Sutton overtook Colin Turkington, you could see the dimming in the outgoing champion’s eyes. The resignation that this just wouldn’t be his year.

Fast forward a handful of laps later, and Sutton’s smile beneath his helmet was unmistakable. Followed by the tears of joy at the realisation that he was now a two-time British Touring Car champion. Sutton overtook Turkington emotionally on that straight also.

In truth, Turkington was rather powerless to resist the force of Sutton and his Laser Tools Racing Infiniti Q50 during the season finale at Brands Hatch.

In the difficult, mixed conditions, the Northern Irishman’s Team BMW UK 330i M Sport never looked like the potent weapon that it has been for much of the season. Shifting balance – with weight or without – held Turkington back, whereas such vagaries played right into Sutton’s hands.

The last thing Turkington needed was a podium pumped full of his title rivals. But that’s what happened.

All year, the Infiniti has naturally run a much softer setup than the BMW. It’s just the way the team works, and that helped make the Q50 a real weapon at Brands. Sutton could be cuttingly precise, balanced on the edge, even in the worst of the weather. In contrast, Turkington was dealing more with a blunt instrument in the stiffer BMW, and the tone was set early.

The one thing you really don’t want when being hunted is to give your hunters any form of early advantage, but for Turkington this was the story of the opening race of the weekend. With Sunday starting in drenched conditions and driving rain as the cars lined up, things didn’t look too promising for the points leader. During Saturday Turkington and his WSR BMW team had struggled to find the right balance with his 330i M Sport, Turkington complaining of too little bite from the fronts, which limited him to eighth on the grid in his fully ballasted car. 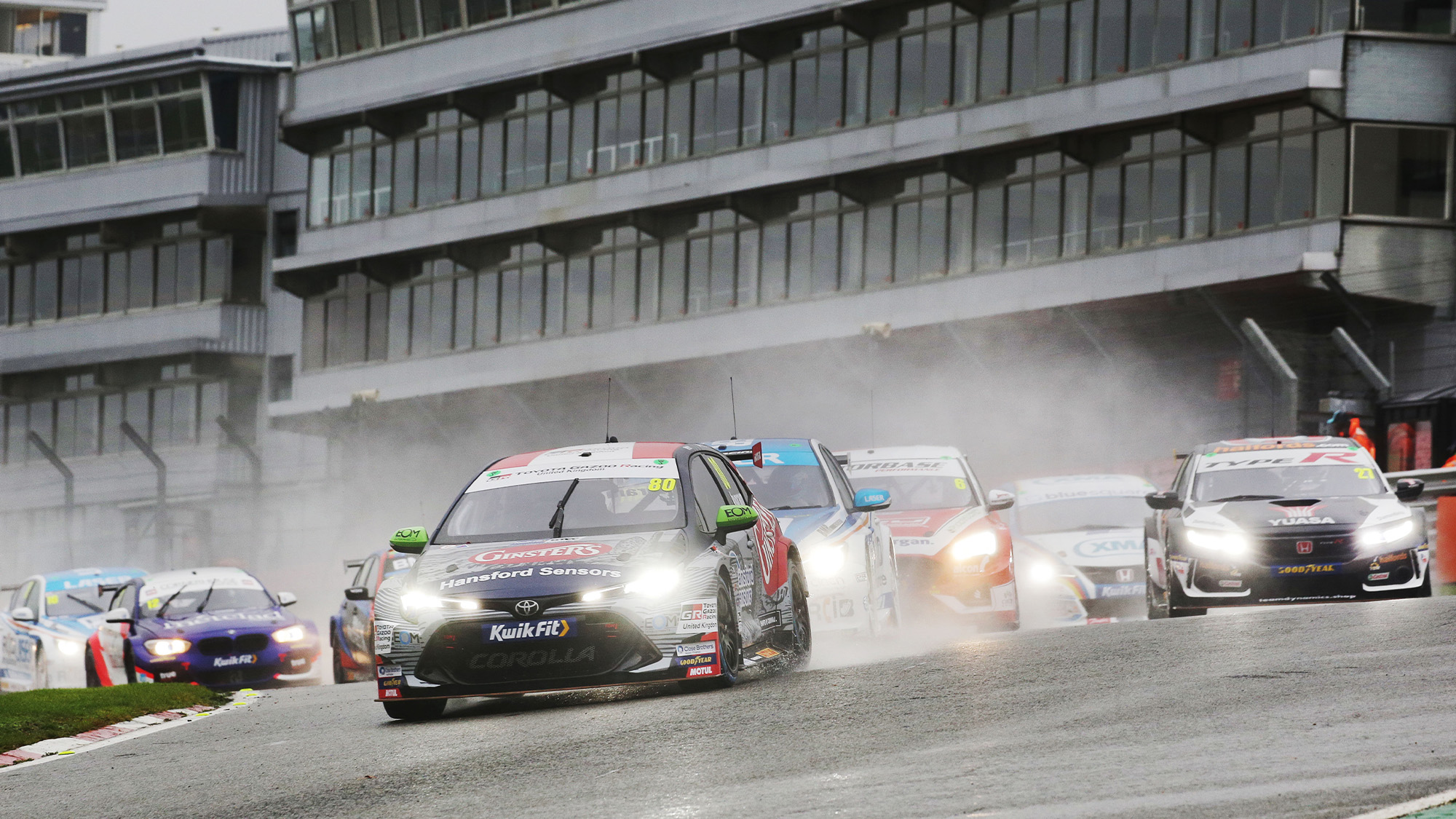 Ingram led Cammish & Sutton at the start of the first race, with Turkington in eighth

Set-ups were changed for Sunday, but Turkington still struggled. “We managed to switch on the front axle, which was our limiting factor yesterday, but we need to balance things up as that wasn’t great. We need to make the car quicker so I can start moving forward,” said Turkington after a miserable first outing in which he struggled to make any progress, dropped a place to Josh Cook’s Honda and surely only held ninth due to having team-mate Tom Oliphant as his rear gunner for the entire race.

With Turkington mired, the last thing he needed was a podium pumped full of his championship rivals. But that’s exactly what happened.

Tom Ingram had secured pole in his Speedworks Toyota, and duly made it wide enough to fend off both Dan Cammish’s Dynamics Honda and Ash Sutton’s Laser Tools Infiniti into Paddock Hill. So far this year, Ingram leading Cammish has produced some great duels, mostly with the Toyota holding on. But in the soaked conditions Ingram couldn’t quite find the grip to forge an early advantage and, once the Honda found a gap up the inside into Graham Hill, Cammish was through and gone. 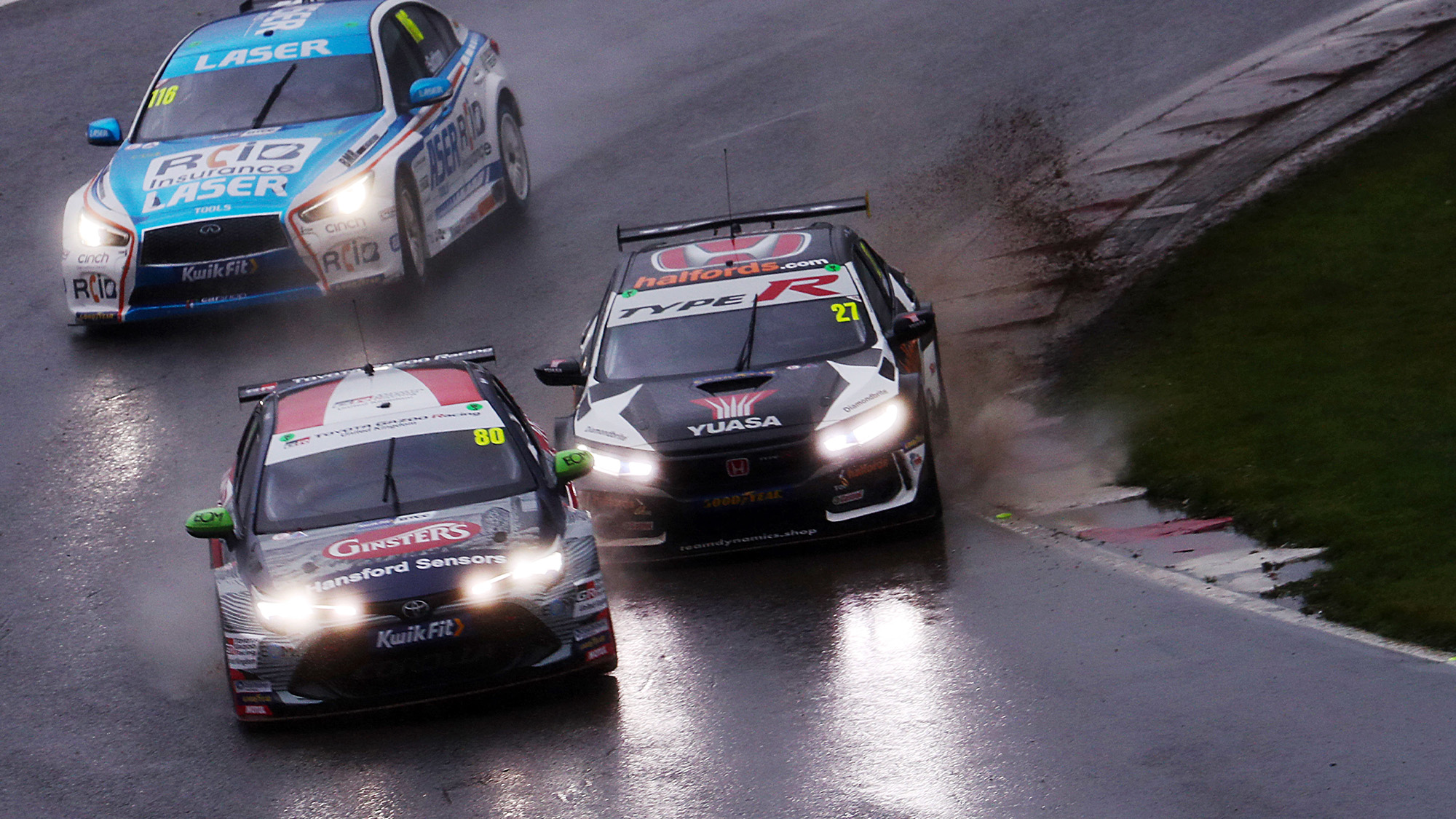 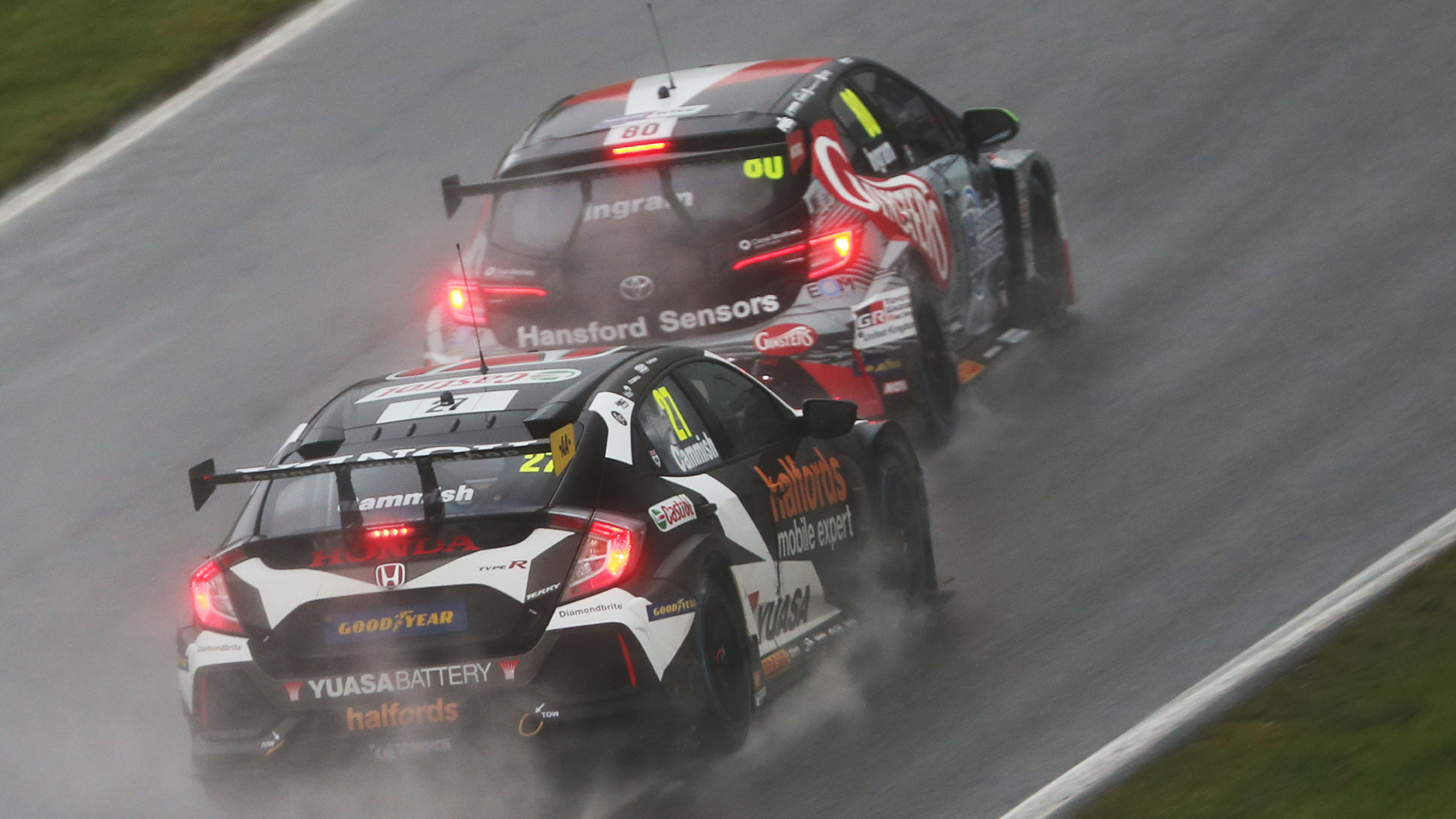 But Cammish muscled his way through... 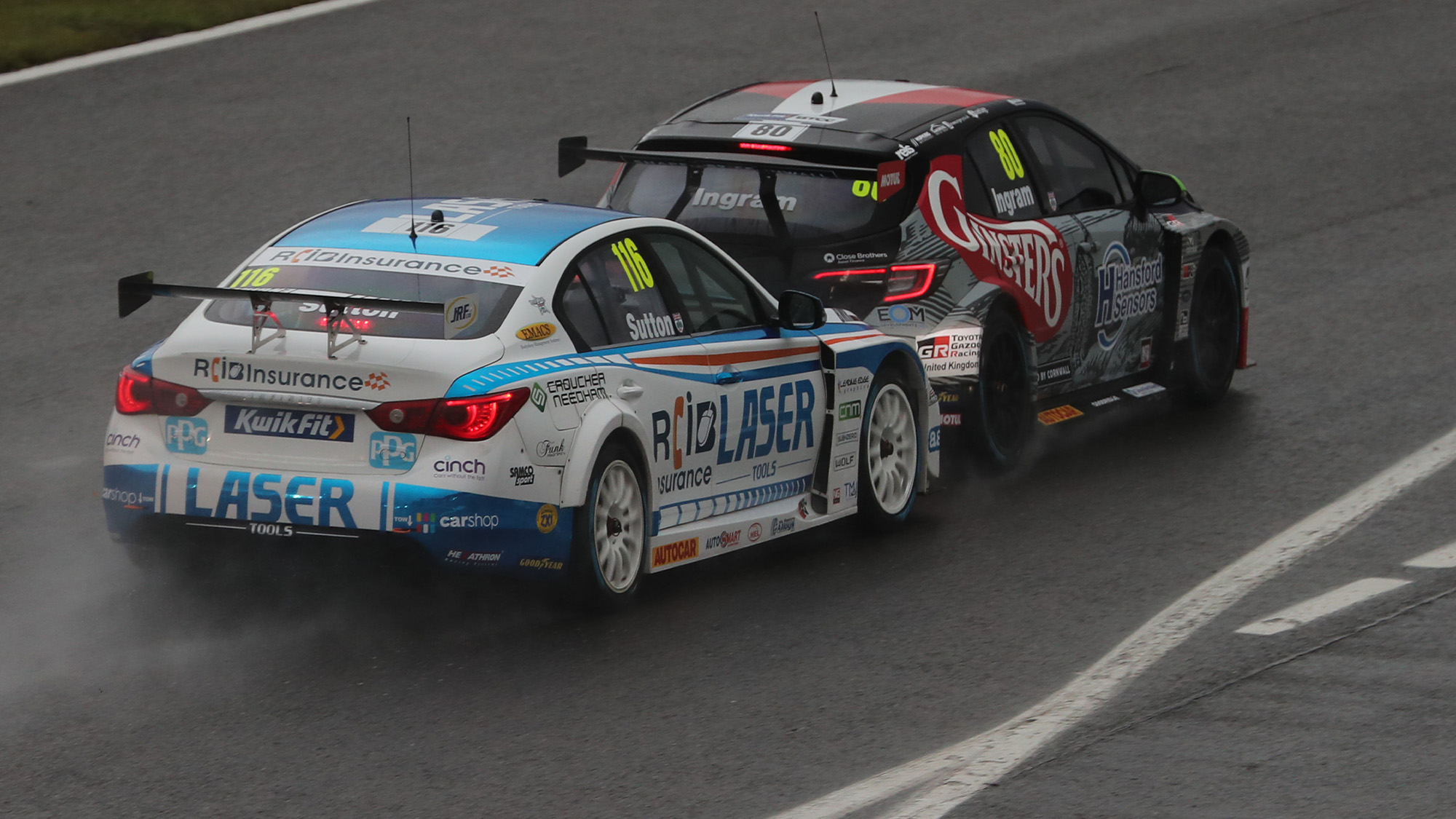 Ingram was then left to try and fend off Sutton, but the Infiniti found greater drive out of Graham Hill to edge past for second, swinging the championship back in Sutton’s favour by two points.

Rory Butcher was fourth, having struggled off the line and dropped spots to both Sutton and Cammish, with Ollie Jackson making it two Motorbase Fords in the top five at the team’s local circuit. 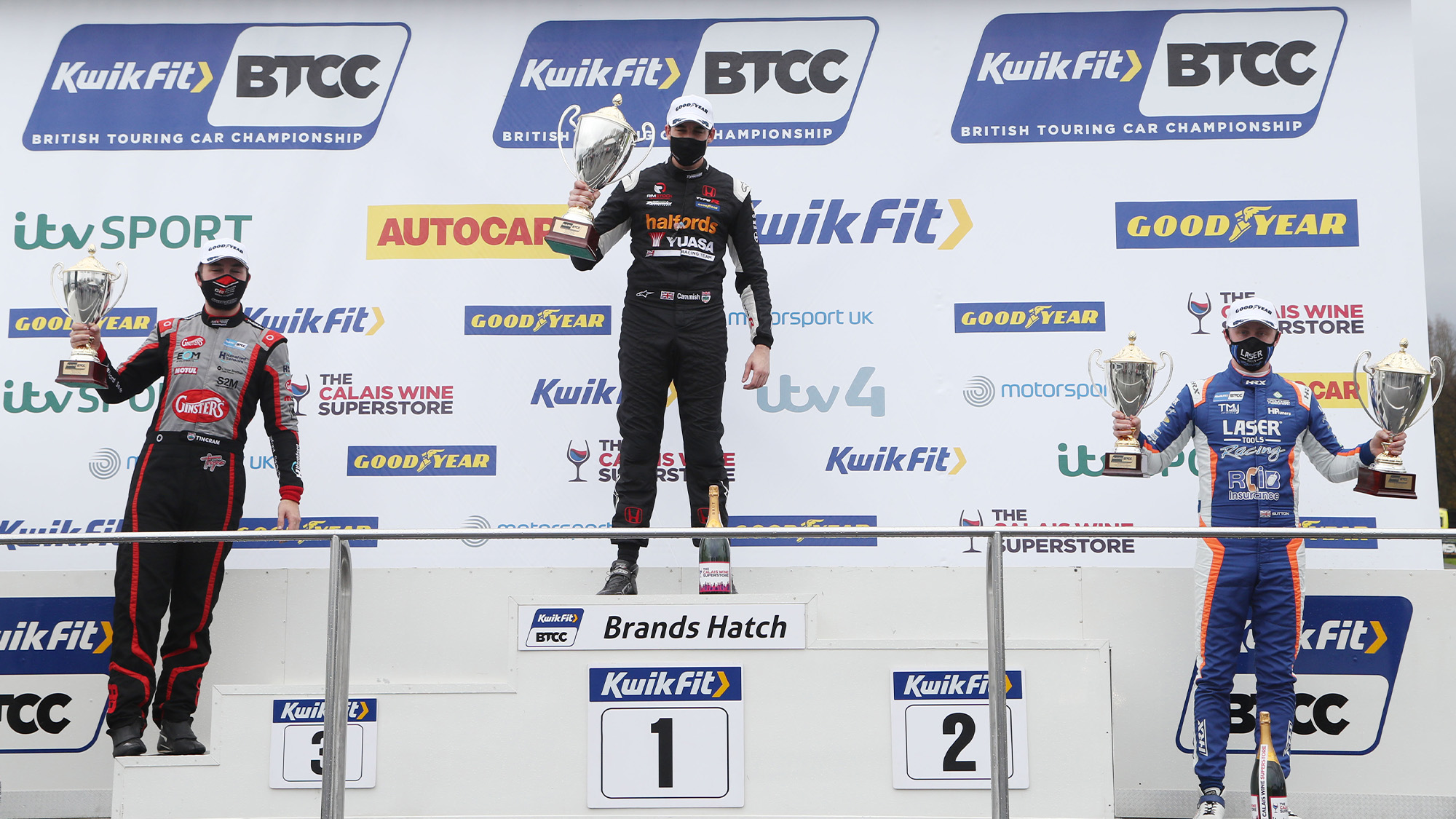 Race one podium was packed with Turkington’s title rivals

Race two would be no less straightforward, even if conditions did improve. Yet it would be another case of Turkington being stuck outside of the top three and looking in.

The rain abated after the opener, and the grid formed up for race two on a damp but drying track. Most cars plumped for slick tyres – including all of the championship chasers – which made for a mixed opening few laps.

Sutton controlled his wheelspin perfectly to slip past pole-sitter Cammish into Paddock Hill as Ingram followed in third. But his start would soon be stunted when a rub between Jackson and Butcher’s Motorbase Fords sent both sliding and elbowed the Toyota briefly off the road and through the gravel.

Cammish narrowly avoided the same fate, skilfully holding a huge slide of his own to keep Sutton in check. Despite Tom Chilton’s wet-shod Civic working its way to the front early on before the conditions swung firmly to the slick-runners, Sutton was peerless, pulling out a healthy gap to snatch a vital win.

“That one felt good,” he said. “The car came alive after a few laps and it was a case of picking my moments and staying out of trouble. Anything can happen in the reversed grid race, so we can take nothing for granted.” 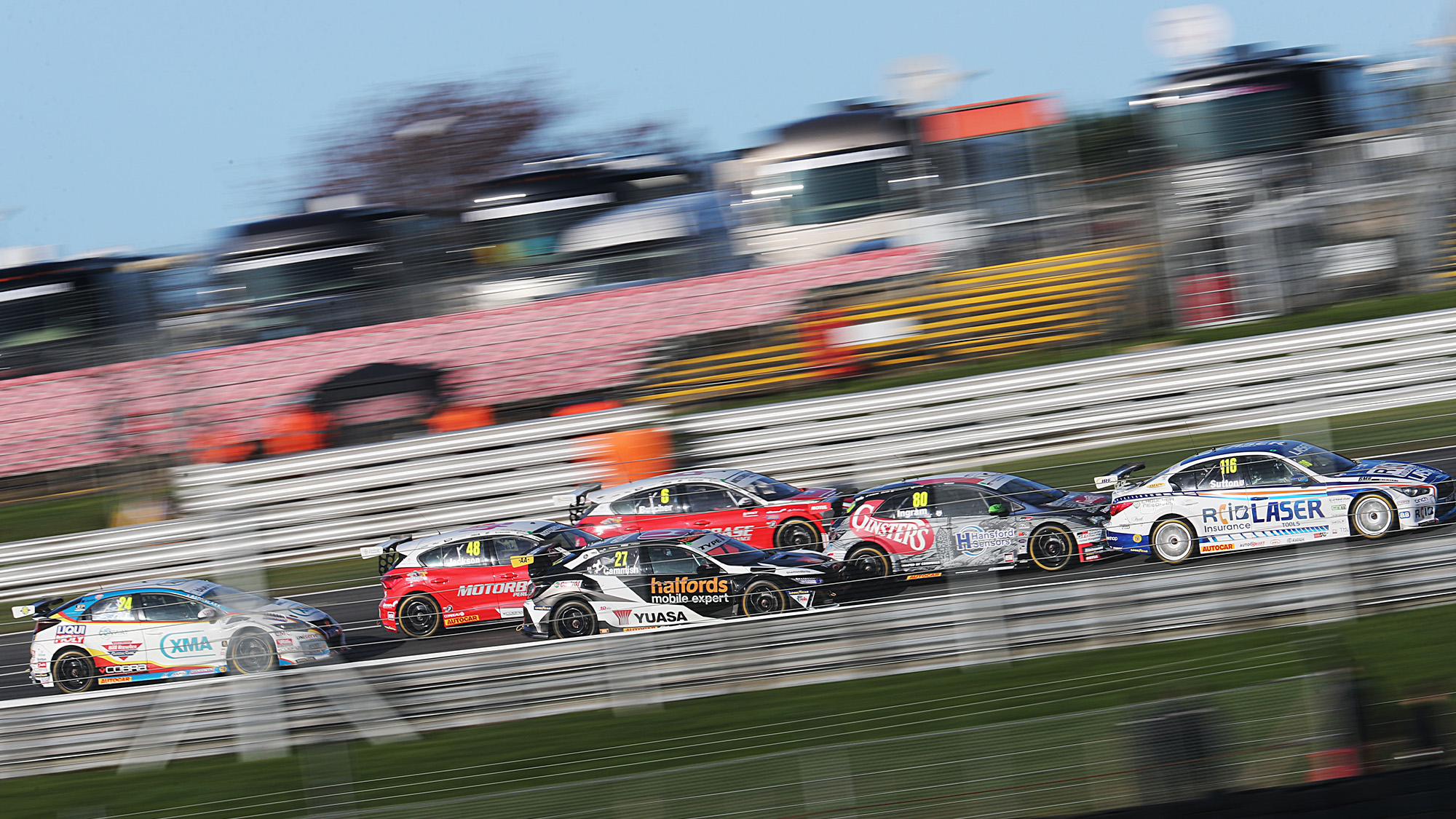 Behind, things were spiced up by a superb recovery drive by Ingram, who snuck his way back up the order to depose both Cammish and Turkington to snatch second in the now-muddied Toyota. Turkington looked to have secured the final place on the rostrum with a brave dive around the outside of Cammish at Paddock, sweeping back across just in time to miss the stranded Audi of BTCC debutant Paul Rivett, which had spun and come to a rest in the middle of the track, unsighted of Turkington until the last moment.

While Turkington did get the move done, officials deemed he’d passed under a yellow flag, and reversed the places after the race, kicking Turkington off the podium as once again his rivals filled its steps.

“I didn’t see any yellow flags going into the corner, but it was certainly a close call!” rued Turkington. “At least the car felt fast, and I needed to move forward. I’m fired up for the last one.”

The net result was Sutton at the head of the points, with an 11-point cushion over Turkington. However, Sutton was starting back in 12th, and with a fully ballasted car, while Turkington was ahead in eighth.

Anything could happen… And then it rained. 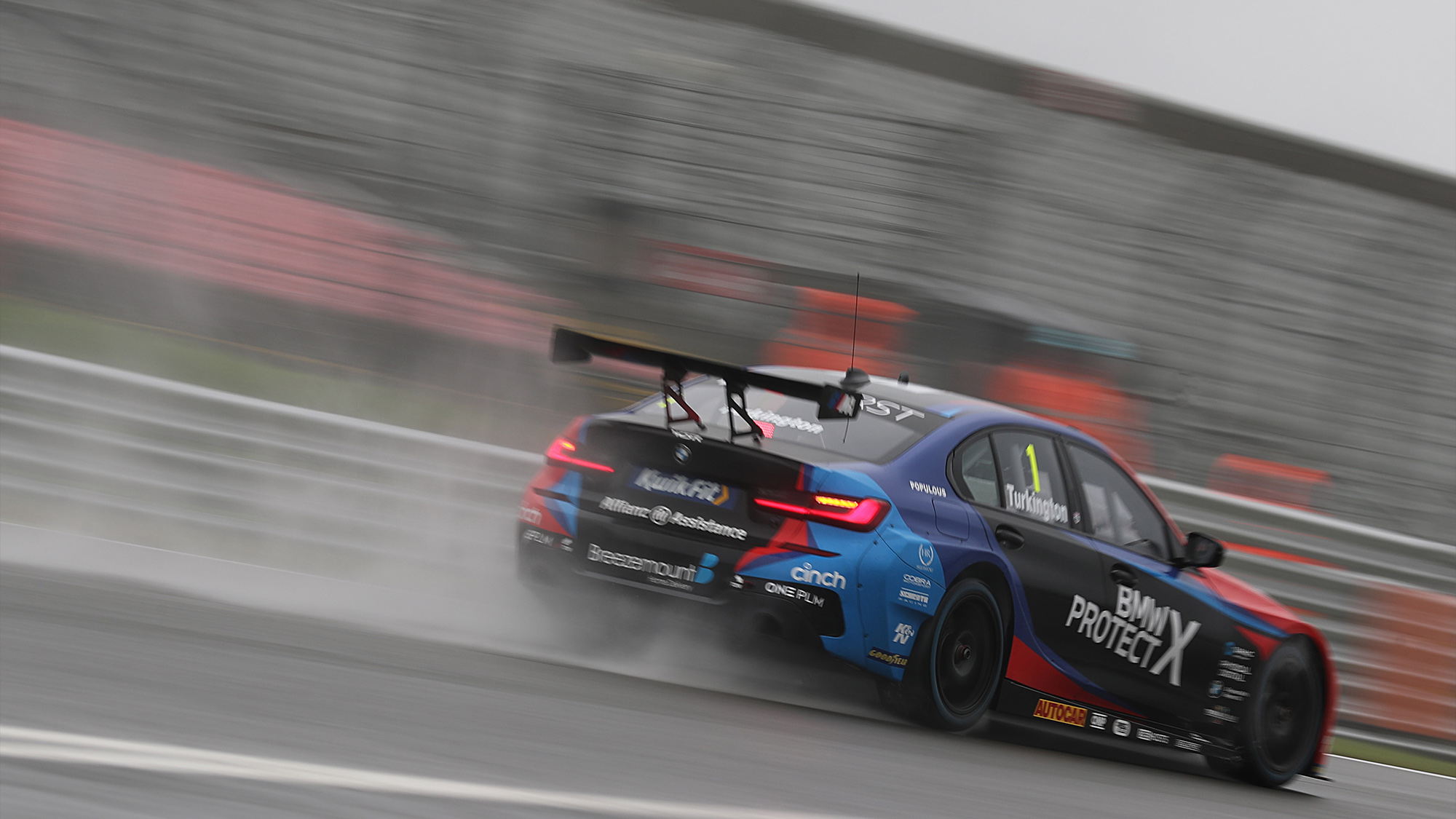 It was almost a sign. The soaked track brought the same old issues for Turkington, who was constantly fighting the car, struggling for grip. Sutton put in a few cautious opening laps, and then slotted his car behind Turkington, knowing he only had to shadow his rival to the flag. But, when Turkington got a poor run out of Clearways, Sutton took his chance, pulled alongside and passed into Paddock Hill, queuing that moment on the onboard camera. There was nothing the four-time champion could do. Game over.

“It just wasn’t my weekend, but we can hold our heads high,” said Turkington. “I just didn’t have the pace in the wet. There was nothing else I could do.”
Sutton would go on to finish sixth and take his second crown. “It’s just incredible, it’s been such a team effort – it’s been a long time since an independent team won the overall BTCC title, and it just feels so special,” said Sutton.

“It’s been a dream of a year, and I have to thank my entire team, my sponsors, my family… everybody. I’m just gutted we couldn’t share this with the fans this weekend. But the car has been superb all weekend, it even came alive in the dry second race. I felt like I had one hand on the trophy after that win, and when it rained before this one I felt like it was coming to us. I sat behind Colin for a few laps, but could see he was struggling. I didn’t want to force a move and risk anything – I learned the hard way about doing that at Croft! – some might say I’m a new man after that…”

For much of this year, few have had an answer for Sutton. And it was a title fully deserved.

Butcher won that finale, drafting almost effortlessly clear of Ingram, Jake Hill and Cammish, as the other two in the title picture did all they realistically could. But there was no taking the shine off Sutton’s day.

A new man, he may be. Just so long as he continues producing the goods in his swashbuckling, old-fashioned way. He’ll have it all to do again next year. 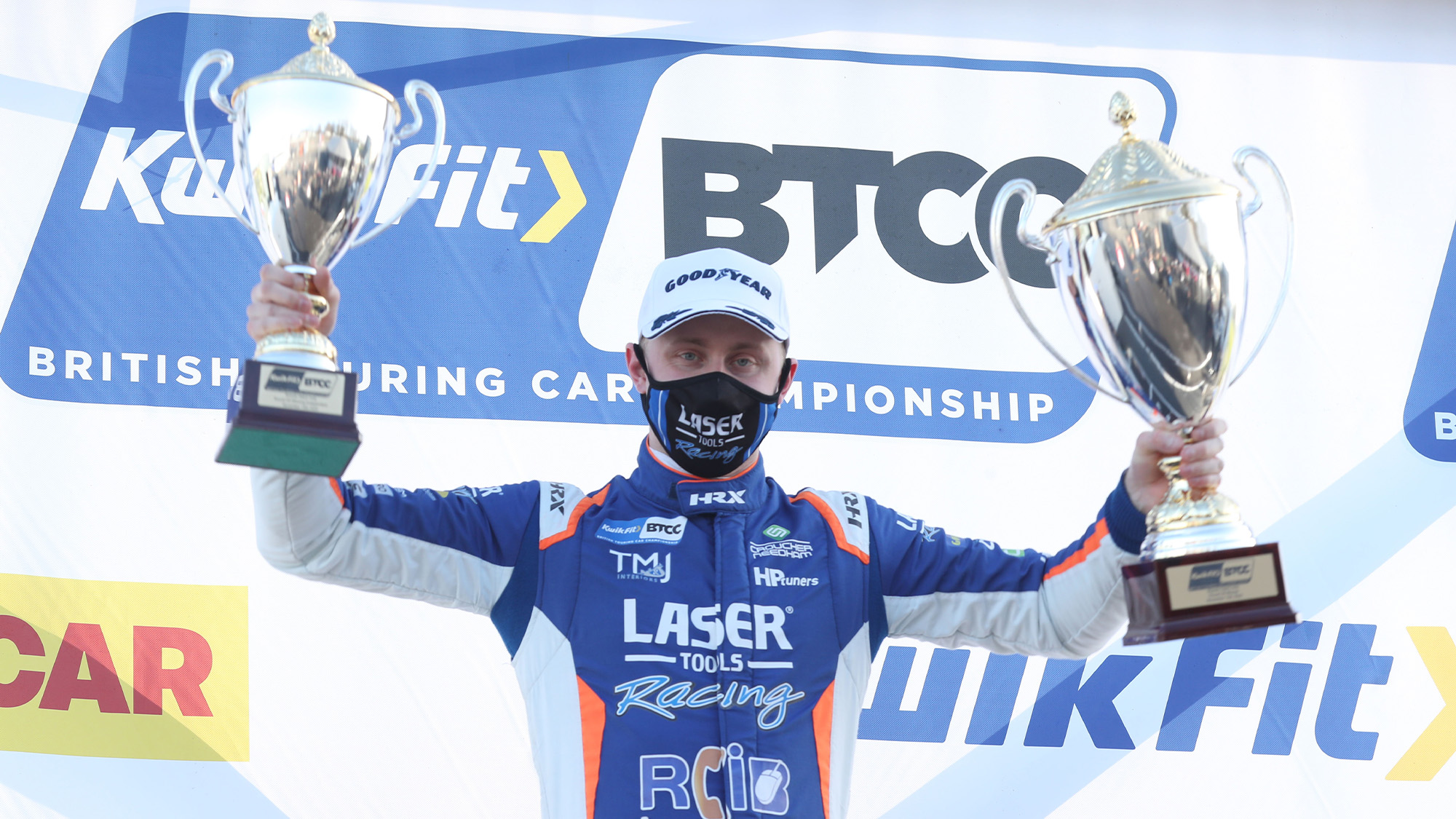