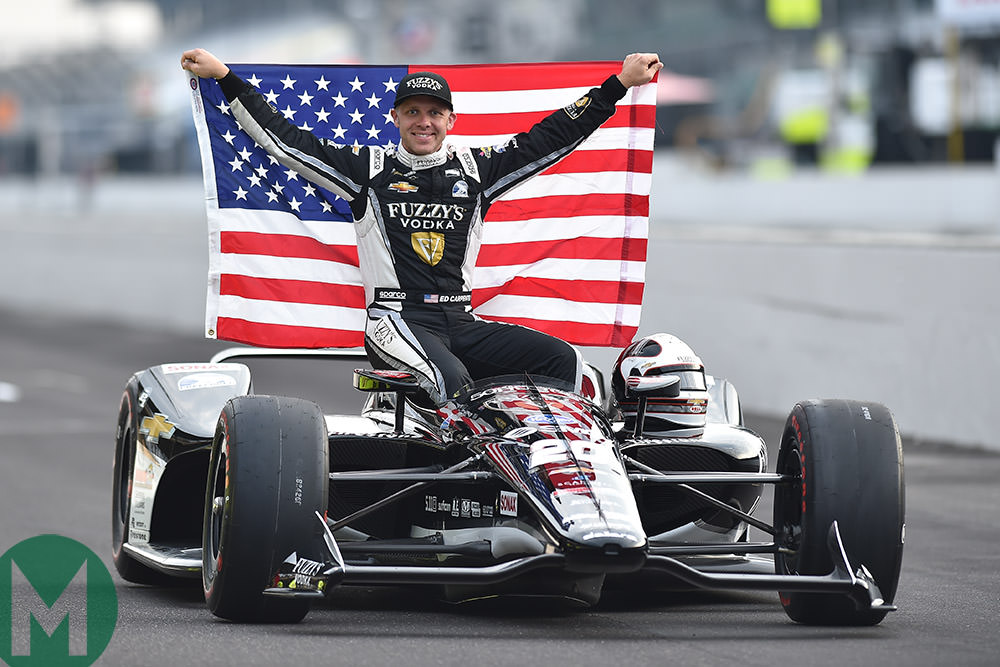 Indianapolis native Ed Carpenter, polesitter for the 102nd Indianapolis 500, stands a chance of joining an exclusive club if he wins the race – two decades on from the most recent inductee.

While it’s rare for a driver to win the race from pole – 21 poles have been converted, the most recent being Hélio Castroneves in 2009 – it’s even less likely that a team owner/driver takes victory at the race.

Carpenter, owner of his eponymous outfit, could become just the sixth driver-owner to win the race if he does so.

It was back in 1922 when the club was formed, with Jimmy Murphy winning the race from pole with riding mechanic Ernie Olson at his side in the white Duesenberg-Miller. Harry Hartz was a distant 3min 13.6sec back at the finish.

The 1930s had a quartet of driver-owners adding to that tally, with pioneer Louis Meyer – who first drank buttermilk in victory lane in 1936 – winning the race with his own entry in ’33 and ’36.

Between then was Kelly Petillo in 1935, his first and only win, before Wilbur Shaw won in ’37 by just 2.16sec over a fast-closing Ralph Hepburn. It took nearly four more decades for a driver-owner to win the Indy 500.

AJ Foyt made history in 1977 with his fourth 500 win, but it had taken the Texan a decade to set the record – and it very nearly slipped away. Foyt was bearing down on leader Gordon Johncock, who was driving George Bignotti’s car, but the Texan was reluctant to turn the boost up.

“I didn’t want to take a chance on blowing the motor up,” he told Gordon Kirby in 2007. “It was our own motor and I knew about what it could stand in boost.”

But as he closed to within seven seconds, Johncock’s engine blew and Foyt – one of five drivers powered by the Foyt V8 – had his fourth win in sight. Johncock reportedly saluted Foyt as he took the lead.

Being a team owner benefited Foyt: “You could build your own car and you could run for Firestone or Goodyear,” he remarked.

“You could do whatever you wanted. I always liked it when you controlled your own motor situation, even though you blew up a lot more motors than you do today. Right now, you’re in somebody else’s hands and there’s no way you could build your own stuff and compete with Honda.”

In this modern era of IndyCar, driver-owners don’t have that advantage and it shows. Eddie Cheever was the last owner to win the race, 20 years ago.

Only two years earlier, in 1996, Cheever missed out on an opportunity to win the race for Menard’s.

“I’ve had a funny career,” said Cheever in 1999. “I started like gangbusters, and always came very close but never got all I wanted. So, to form my own team, do it right, and win the Indy 500 last year was very gratifying.

“Twenty-five years of nightmares gone in three and half hours.”

And the win, though he doesn’t see it as his greatest, changed him: “All it takes is one win, and you look at life in a totally different manner. I can say that from experience now, because after winning Indy, every time I sit in a racing car, I’m annoyed if we don’t win. You will dig deeper. It does make a difference.”

Carpenter has been competing at the Indy 500 since 2004, and this is his third pole – so could he repeat Cheever’s feat and take the win?

The 37-year-old has finished in the top-10 just three times in his career, but there’s no shortage of pace from his three Ed Carpenter Racing cars. Team-mates Spencer Pigot and Danica Patrick have qualified sixth and seventh, respectively, for the race.

It’s not just the Team Penske trio (second, third and fourth on the grid) that threaten to spoil the party. Collision, calamity and cloudburst are waiting to throw a spanner in the works.