Back in the 1960s and ‘70s America’s auto racing writers used to select an annual ‘Driver of the Year’ from an amazingly rich array of stars which the sport enjoyed in those days in Indycars, NASCAR and American road racing. In the ‘60s the award was sponsored by Martini & Rossi and it’s interesting to reflect on the tough selection facing the scribblers in 1967. 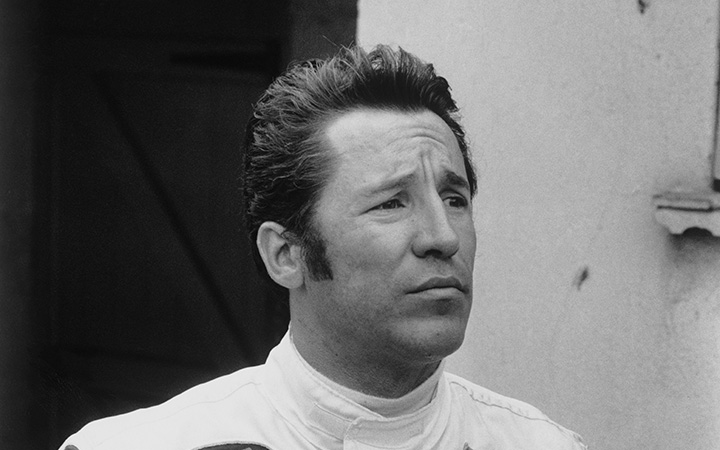 AJ Foyt won that year’s Indy 500, scoring his third win in the big race. Foyt also won the Le Mans 24 Hours in ’67, co-driving a Ford MkIV with Dan Gurney, and took his fifth USAC Championship in eight years. In NASCAR Richard Petty, not yet known as ‘The King’, took his second stock car championship in dominant style, winning a record 27 races, including 10 in a row, and taking 18 poles. 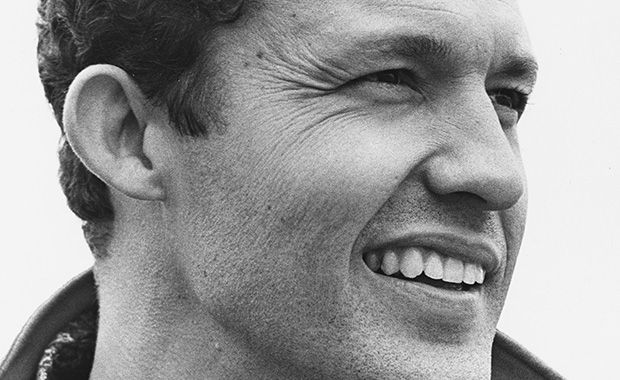 Yet Andretti beat Foyt and Petty to Martini & Rossi’s ‘Driver of the Year’ award by earning more votes from the panel of motor sport writers. They decided that Mario’s season, which included wins in the Daytona 500 and Sebring 12 Hours – two very dissimilar events – was more impressive than either Foyt or Petty’s stellar years. But it’s a year Andretti prefers to forget.

One of the reasons is that 1967 began with the death of Mario’s good friend Billy Foster in a crash in qualifying for the season-opening NASCAR race at Riverside at the end of January. One of Foster’s brake drums exploded as he entered the fastest turn on the course and his car hit the steel wall at almost full speed. Foster was a Canadian from British Columbia and had arrived in Indycars at the same time as Mario. They were rookies together at Indy in 1965 and became great friends, even buying a McLaren Can-Am car together.

But life goes on and the month after Foster’s death Andretti scored a memorable victory in the Daytona 500. His win didn’t go down well with many NASCAR fans who were unhappy to see this little fellow from Pennsylvania with a foreign-sounding name and accent steal their thunder at the year’s biggest stock car race.

Andretti drove a Holman-Moody Ford at Daytona and set his car up to run loose, much like a dirt car, rather than a little push or understeer preferred by the stock car drivers. Mario used all the track, as he would in a sprint or Indycar, diving down to an apex and letting the car slide, tail-out, up the banking on the exit of the corners. The NASCAR drivers thought he was crazy, but on race day Mario proved them wrong. 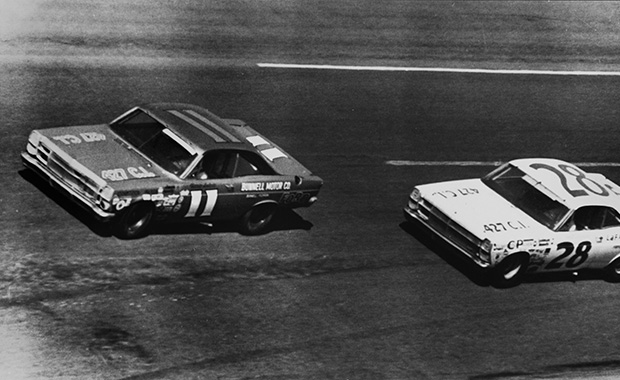 After qualifying an unspectacular 12th Andretti motored to the front at the start, taking the lead on the 21st of 200 laps and winning easily in the end. David Pearson was the only NASCAR regular who was able to match Mario’s pace but just after half-distance Pearson blew his engine, leaving Andretti on his own.

Mario moved on to Sebring for the 12-hour race where he was teamed with Bruce McLaren in one of the brand new Ford MkIVs. Mario and McLaren had worked closely together during Ford’s exhaustive winter testing programme that operated at a level that was otherwise unknown in those days. The Ford team completed a couple of 24-hour simulation runs at Daytona and the new Ford ran faultlessly in the race. Andretti and McLaren led almost all the way after Jim Hall’s Chaparral 2F blew its engine, beating Ford team-mates AJ Foyt and Lloyd Ruby by 12 laps.

The USAC Championship season got underway at Trenton where Andretti led all the way from pole, scoring a virtually unchallenged win. At Indianapolis he was on the pole for the second year in a row, but lost a wheel in the race. Nor did things improve at Milwaukee just a few days later when he crashed during practice while trying to avoid Carl Williams’s car, which had lost a wheel. Andretti’s car was too badly damaged to qualify so he had to miss the race.

He then flew to France for the Le Mans 24 hours, where he was teamed with Lucien Bianchi in one of the fleet of factory Fords. For a while they battled with eventual winners Gurney and Foyt, but Andretti crashed heavily after his rear brake pads were installed backwards on a pitstop. 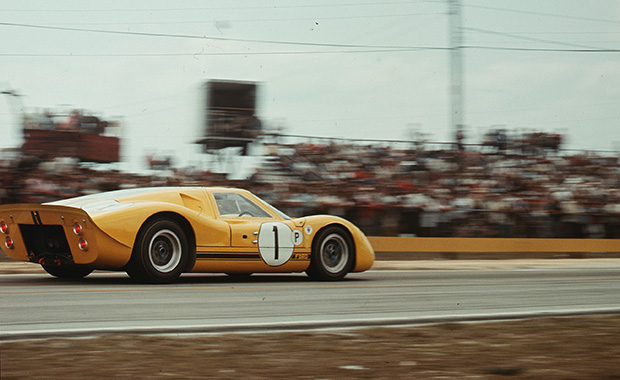 His car bounced back onto the track and a multiple accident occurred as two more Fords spun and crashed trying to avoid Andretti’s crashed car. Luckily, everyone scrambled out but Mario had broken a couple of ribs and had some bad bruising from his shoulder harness. Some friends suggested maybe he should take a break, miss a few races, and allow himself to properly heal. But the thought never entered his mind. “There was no way I was going to lay around, feeling sorry for myself. I wasn’t hurt that bad, but I was seriously sore for a few weeks.”

His string of bad luck continued through a pair of rain-soaked USAC races at Mosport the following weekend, followed by the Firecracker 400 NASCAR race at Daytona and a USAC stock car race at Milwaukee. At Mosport he spun out of the first race, then came from the back of the field to finish 11th in the second. At the Daytona and Milwaukee stock car races he was an early victim of mechanical failures.

Andretti’s disappointing season began to turn around in the middle of July with a pair of victories in AJ Watson’s brand new Ford-powered USAC sprint car at Oswego, New York. The next weekend he won the USAC Championship race at the Indianapolis Raceway Park road course for the third year in a row, then won the first of two heats in a postponed USAC stock car race at Mosport.

Following his Mosport stock car win, Andretti scored Indycar victories at Langhorne at the end of July, and at the St Jovite road course in early August where he won two separate 100-mile races. At Springfield the next weekend, for the first dirt car race of the year, he finished second to Foyt, then won on the pavement at Milwaukee the next day. 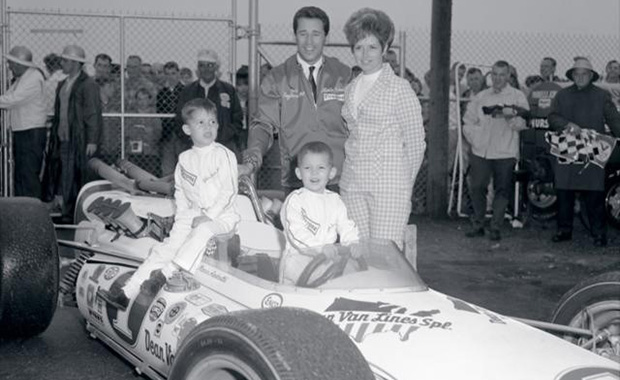 In September, Andretti finished second to Foyt on the dirt at DuQuoin, Illinois, then beat the Texan in the Hoosier 100 a week later at the Indiana State Fairgrounds. His Hoosier 100 victory pulled him to within 60 points of championship leader Foyt. Back in their rear-engine cars at Trenton, Andretti and Foyt qualified 1-2, but Mario crashed while battling with Lloyd Ruby in the race. Foyt had to spin to avoid hitting them, but the Texan recovered and went on to win.

Foyt won again on the dirt at Sacramento in October with Andretti taking second, but neither scored any points three weeks later at the Hanford, California oval. Andretti then won the penultimate round of the year at Phoenix in November, pulling to within 340 points of Foyt. Andretti beat Al and Bobby Unser across the line at Phoenix while Foyt crashed after colliding with Jerry Grant’s car.

USAC’s season closer in 1967 was on the road course at Riverside, and even though the place held bad memories for Andretti after Billy Foster’s death there 10 months earlier, he ran at the front, battling for the lead with Dan Gurney. Foyt’s Goodyear-tyred car was knocked out of the race when he collided with a spinning Al Miller, but Goodyear desperately wanted Foyt to beat Firestone man Andrettti to the title and had worked out a deal for Foyt to take over Roger McCluskey’s car if he hit trouble.

McCluskey duly obliged and Foyt was able to salvage fifth place from the race. For a while it looked like Andretti was home free, but while leading with just four laps to go he had to stop for fuel, falling to third. So Foyt beat him to the championship by 80 points, 3440 to 3360. 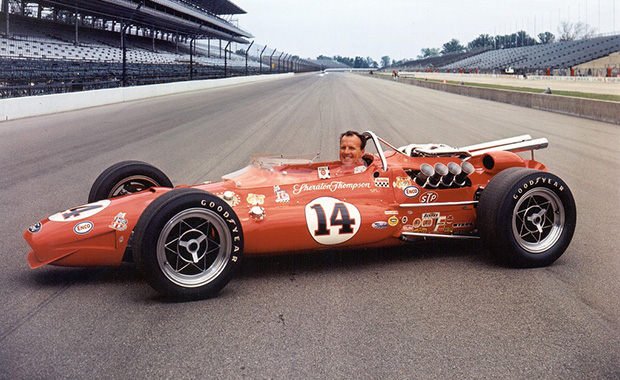 “I had the championship in my hands, and then it was gone,” Mario remarks. “It’s funny. I won ‘Driver of the Year’, which was a tremendous accolade, but that wasn’t a year I felt good about. Billy Foster had been killed, Indy turned into a disaster, and I lost the championship at the last minute. I always said, you can have 1967. I just wanted to move on.”

And that he did. At Watkins Glen the following year he qualified a Lotus 49 on pole for his F1 debut in the United States Grand Prix. In 1969 he won the Indy 500 and also took his third USAC Championship in five years. In 1970 he scored his first F1 victory, driving a Ferrari in the South African GP, and eight years later he finally won the World Championship driving a JPS Lotus 79. Andretti took his fourth and last Indycar championship in 1984 and scored the 52nd and last Indycar win of his long career at Phoenix in 1993.

Meanwhile, Foyt went on to win a record seven USAC Championships, his last coming in 1979. The Texan is also ranked first ahead of Andretti in all-time Indycar wins with 67. And Petty also won seven NASCAR titles while accumulating an unapproachable record of no fewer than 200 wins on his way to becoming ‘The King’.