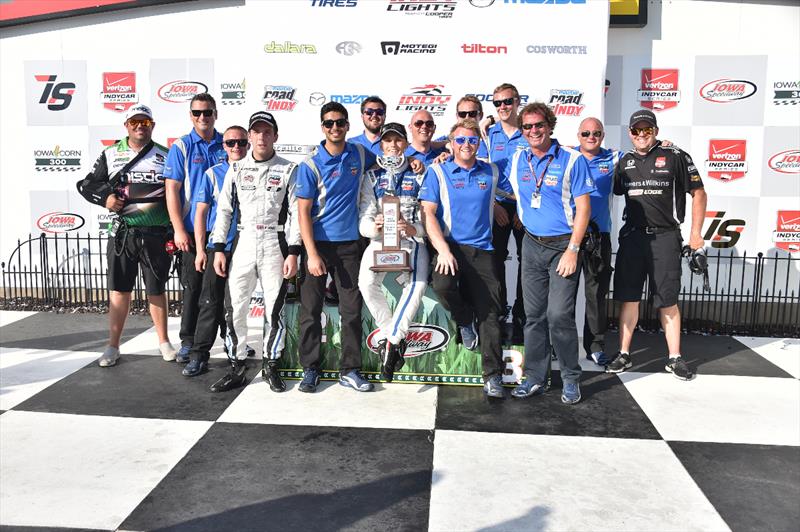 Carlin Motorsport is to make arguably its biggest leap yet by stepping up to the IndyCar championship for 2018. Former Formula 1 racer Max Chilton and experienced IndyCar veteran Charlie Kimball will lead the assault.

Both drove for the team in British Formula Three, Kimball in 2005 and Chilton four years later. Chilton, whose father is CEO of Carlin, has been something of a regular with the team, contesting GP2 and Indy Lights with the squad.

The team has announced it will run with Chevrolet.

“It’s a huge development for us, as a team,” Trevor Carlin says, following a recent ‘Pint with’ podcast with Darren Cox, the first of an upcoming series.

“Going to IndyCar is pretty daunting, to be honest. It’s funny, sometimes you’re worried about what you wished for but here we are with a deal to do the full 2018 IndyCar championship. This obviously incorporates the Indy 500, so we’re in the process now of building a team to achieve our goal. We’re excited but also nervous.”

The team has won in every championship it has entered, and made a massive impact on Indy Lights. But this presents a different challenge, moving out from motor sport valley and onto a new continent; there’s a relaxed air about Carlin, for good reason.

“I’m chilled because we’ll employ the same processes,” he continues. “Whether those processes are good enough to get to the front, who knows. Let’s not kid ourselves, we’re very capable of running an IndyCar at a decent level. The point of conversation now is how high we can be in IndyCar. Our expectations are to win.

“We want to earn our stripes, of course. That could take a few years, but if we can pick up a result during the season through strategy, or yellow flags, then happy days. I feel, as a good European team, we can be at a decent level early on.”

Carlin’s confident, and he’s aiming to build the same reputation the team has in Europe in America – that of winners. And to do so he’s looking squarely at one team for inspiration.

“The benchmark in any form of motor sport in America is Penske,” he acknowledges. “That team is what is because of what Roger does. The rest, I personally think in time we can compete with them.

“I think we’ll be unwelcome. At the end of the day we do things differently, you can’t be specific about exactly what, but we do. Of course, we’re travelling a long way to achieve something so we have to be motivated to make the effort in the first place. The guys in the US are established, the last thing they want us someone turning up and shaking the tree.”

But that’s exactly what the team did in Indy Lights: “We won our first three races and should have won the title in year one. We did it in year two, but not for a moment expecting to do that in IndyCar. This is a long-term project. It’s the direction we want the company to go in, to become part of the establishment in the States. We want to embrace and be part of the culture.”

IndyCar seems a natural progression for Carlin, and it also puts them on one of the world’s biggest motor racing stages: the Indy 500. His expectations? To get two cars to the finish.

“We want to be successful and competitive. The Indy 500 is a separate event, almost. The worst thing is the Indy 500 is the same weekend as Monaco so you’re never, except this year, going to get the F1 drivers over. But for me, it’s about finding the right drivers with the right story. Look at the back catalogue of Carlin drivers and there are some great kids.”