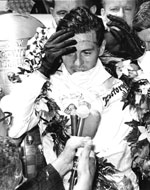 As my namesake Hannibal Smith said in just about every episode of The A-Team: “I love it when a plan comes together.” The 1980s TV-gold catchphrase, not to mention George Peppard’s cigar-chomping grin, sprang to mind several times as the deadline loomed for the August issue. Why? Because this one made us sweat even more than Jacky Ickx and Mario Andretti last month, and when our cover story plan finally did come together, it was Havanas all round.

Last summer Jim Clark’s Indy 500-winning Lotus 38 returned to these shores and stole the show at the Goodwood Festival of Speed as a static display. Clive Chapman, son of Colin and the boss of Classic Team Lotus, told us about a plan to carry out the most sensitive of restorations to this monumentally important relic of racing history in order for the car to run up the hill in 2010. That was enough for me. I decided there and then that the restored 38 had to be on the cover of Motor Sport ahead of this year’s Festival – and luckily for me, Clive agreed.

Deputy editor Gordon Cruickshank tracked progress at CTL through the winter, paying a visit to Norfolk in January to witness the original Team Lotus ‘boys’ get reacquainted with the old girl. But as winter turned to spring, Clive had bad news. He had doubts that 38 would be ready for us to photograph in time to make the issue. Crikey. Now where did I file that plan B?

But in true Lotus style, Clive gritted his teeth and made a decision. His boys would meet their deadline – and hence help us hit ours – and do whatever it took to get the car ready. He was determined that Jimmy’s Indy winner would grace Motor Sport’s front cover, as we’d all hoped.

We booked one of our favourite snappers, Greg Pajo, lined up a studio local to the team and crossed our fingers. Clive had asked if the shoot could be carried out in the evening, to give the team more time to complete the finishing touches. It was that tight. In the office we pressed on with other pages, nervously waiting for news. Then a message from Greg: the green-with-a-yellow-stripe racer with the odd-looking offset wishbones was being wheeled out of a truck and into the studio. It was gonna be all right.

In the days that followed, Greg delivered his gorgeous images, Gordon’s words were laid out on the page, we put the cover together and the anxiety drained away. Thanks to Clive and everyone at CTL, we had our cover and a cracking story to match. It’s one I’m particularly proud of. When you see the issue, I think you’ll see why.

Don’t miss the chance to see the Lotus 38 and two other Jim Clark classics – the 25 and 49 – at the Lotus Festival at Snetterton on June 20. Motor Sport will be there to join the celebrations. Do come and say hello.