I’m off to Watkins Glen this weekend for an IndyCar race and because I haven’t been there in sixteen years I’m very much looking forward to it. Back in the seventies and early eighties I used to go to the Glen two or three times every year to cover Can-Am, Formula 5000 and six-hour races, as well as a handful of F1 and CART races. But after going to the first two NASCAR races at the Glen in 1986 and ‘87 and a few more IMSA GTP races, I haven’t been there since 1992. 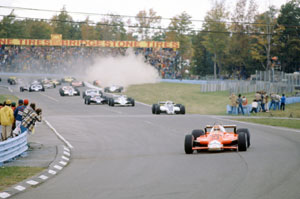 The full, 3.377-mile long circuit at the Glen is a real man’s track, full of high-speed corners with plenty of places for some fine spectating too. Opened in 1971, the long track is more demanding than the 2.4-mile short circuit used by NASCAR, and a place where some hiking around the countryside rewards you with some clear information about which drivers and teams have their acts together, and which don’t.

The IRL brought IndyCar racing back to the Glen in 2005 after an absence of a quarter-century. CART ran three races at the Glen in 1979, ‘80 and ‘81 as the United States GP fell into financial disrepute in the face of Bernie Ecclestone’s increasing financial demands and improving options of street races at places like Long Beach, Las Vegas, Dallas, Detroit and Phoenix. F1 finally departed the Glen in 1982 and during this time CART tried to pick-up the track’s open-wheel ball. But even the presence of Mario Andretti in the field didn’t help sell many tickets.

NASCAR arrived at the Glen in 1986 and second of the modern NASCAR races at the Glen in ‘87 drew more than 90,000 people. It was by far the biggest American road racing crowd of the summer at a track that F1 and CART had forsaken, leaving the way clear for NASCAR to move in and become the Glen’s feature show of the season, and of course, for ISC to take over the track’s ownership.

As well as hosting the United States GP for twenty-two years from 1961-’82, there was also the mid-summer Can-Am/F5000/Six-Hour weekend which was an equally big event on the American racing calendar in the seventies and eighties. In those days, the track was known as the ‘Home of American road racing’. But suddenly, by the summer of ‘87, the Glen was devoid of any major road racing series and dominated by NASCAR. It was a seminal point in initiating the sea change the sport has undergone in the United States as NASCAR became the country’s pre-eminent form of racing.

The Glen is round ten of this year’s seventeen-race IRL championship and marks the beginning of the road course-dominated final phase of the season. Five of this year’s last eight IRL races are on road courses – the Glen, Mid-Ohio, Edmonton, Sonoma and Belle Isle – and it will be interesting to see what effect the run of road races has on the championship as the series goes down to the wire over the next two months. 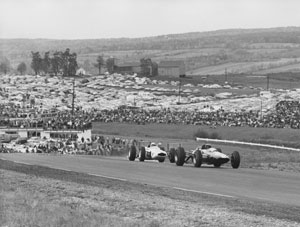 At the Glen in the twenty-first century, of course, the big names are Earnhardt, Gordon, Stewart, Johnson, Busch and co. The days of great road racers like Jim Clark, Jackie Stewart, Phil Hill, Dan Gurney and Mario Andretti are long-gone, unlikely ever to return, and not much of a crowd is expected at the Glen this weekend. But it will still be a delight to spend a few days roaming around the grand old road circuit in upstate New York.