Dallara has in its 42 years surpassed Brabham, Lola, Lotus, March and Reynard as the greatest supplier of racing chassis. And with good reason: its products are damn good. 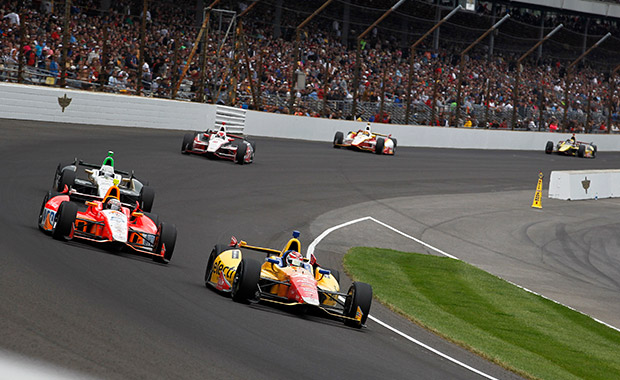 That’s not to say IndyCar didn’t miss a trick when it plumped for its DW12 design in 2012. Given that this series struggles in NASCAR’s shadow – it would shrivel and die without the Indianapolis 500 – the braver choice of Ben Bowlby’s DeltaWing might have been the better one.

The financial and logistical benefits of single-make racing are plain – verging on dull. Okay for door-handling hot hatches or feeder formulae, it’s disappointing to find it in a premier championship.

If it must be that way, the high-profile promotion of a arrow-shaped machine capable of unpicking the sport’s increasingly unfashionable fabric would have generated more interest. Sure, it would have become like any other one-make series eventually, but at least by then it might have pointed single-seater racing in America (and beyond) in a new and hopefully beneficial direction.

Instead, and with the utmost respect to Dallara, we got more of the same. 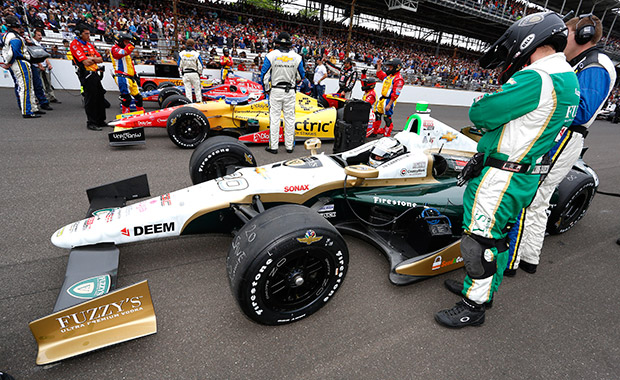 This fact would appear to be dawning on the bosses, for there is rumour of an experimental design being allowed at future Indy 500s.

This would be akin to Garage 56 at Le Mans, a right-minded piece of left-field thinking that allowed Bowlby to prove his design’s fitness in 2012. (He returns this year with a coupé backed by Nissan and fitted with a hybrid-electric power plant.)

A history of innovation

Mooted Garage 34 is befitting of Indy’s long history of innovation. Its raison d’être in 1909 was a proving ground for a burgeoning car industry.

There followed a period, naturally enough, when those involved became complacent and stagnation set in. 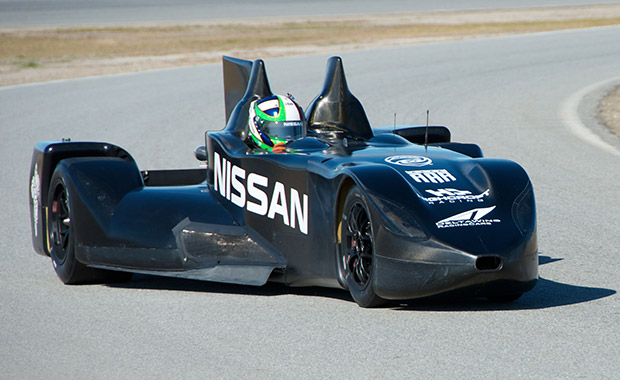 The DeltaWing in its original form, 2012

This cannot be allowed to happen today. Whereas NASCAR can apparently survive and thrive by living in the past, Indycar must diversify or die.

Racing cars that break moulds live forever in the mind.

The winner of the maiden 500, the Marmon Wasp of 1911, stirred a hornet’s nest with its single-seat layout and non-stock engine, but the controversy boosted the race’s popularity – and also gave us said rear-view mirror.

The Blood Brothers’ Cornelian of 1915 was remarkable. A welded and riveted monocoque with independent suspension, it was futuristically small and light. Its driver Louis Chevrolet became more famous admittedly but, 40 years later, Jim Clark’s Lotus benefited from those same principles to score an epochal victory.

Low-slung, supercharged, front-wheel-drive Millers, another paradigm shift, were the most dramatic and expensive – $15,000 a pop – racing cars of the 1920s. Thoroughbreds, they were fast, too – 120mph-plus laps from 1.5 litres running on methanol. 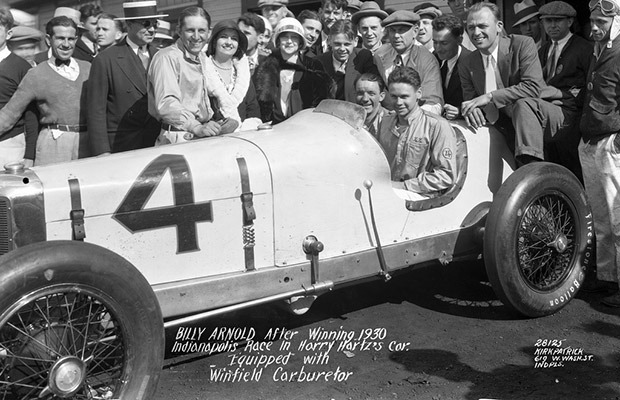 But it wasn’t until the arrival in 1930 of the unprepossessing ‘Junk Formula’ that the first traction avant victory was achieved. And what a victory it was! Billy Arnold qualified on pole, led all but two laps, set fastest lap, and finished more than seven minutes ahead.

The financial strictures of the Great Depression forced ever more lateral thinking on competitors: engines in parallel; a yowling 16-cylinder two-stroke; four-wheel drive; and non-stop diesels. This was interesting, arresting ‘Junk’.

Feeling more flush by the decade’s end, American racing fell into line with its Grand Prix cousin: 3-litre supercharged or 4.5-litre normally aspirated. Some of its cars, however, were quirkily out of step.

Harry Arminius Miller, a genius increasingly tortured, signed off with a flourish: a four-wheel drive with independent suspension, disc brakes and pannier tanks, and an inclined engine behind the driver. Unfortunately, the latter was perched above the drive train and the end result, according to Doug Nye at his very best, “looked like a plump country chicken sitting contentedly on a clutch of eggs.”

These cars showed flashes of speed but were not blessed with good fortune: most burnt to a crisp. One took brave George Bailey with it during practice in 1940, another a dozen or so garages on the race morning of ‘41.

The four-wheel-drive system of Lou Fageol’s Twin Coach Special was simpler, being provided by two supercharged Offenhauser Midget engines sited front and rear and linked only by a throttle mechanism. Paul Russo qualified in the middle of the front row in 1946 but spun out early.

Another in search of better grip on the slicked Brickyard was the Pat Clancy Special of 1948. Instead of two engines, its Kurtis-built chassis featured siamesed Midget-type rear axles. Bill Devore drove this six-wheeler to 12th place.

Frank Kurtis was also involved in Indy’s first turbo car: a 6-litre Cummins diesel that Fred Agabashian whistled to pole in 1952. It was the former’s low-line, offset ‘roadster’ chassis, however, that had the greater impact. 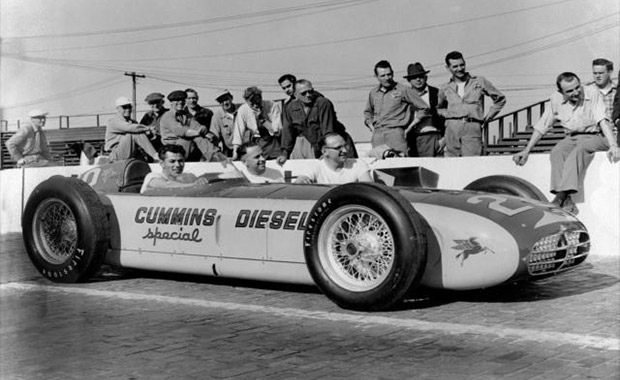 Agabashian failed to lead a lap, retired when the turbo ingested debris, and Cummins never returned. Rightly, it feared a cubic-capacity backlash from organisers who, though delighted with the publicity, could not afford to alienate the majority of its grid in the longer term.

Instead, near-universal Offy-engined roadsters, Kurtis or otherwise, dominated the next 10 years as Baby Boomer America snuggled deeply into its comforter.

The shock of the British new – The Beatles, Cooper, Lotus and Lola – in the mid-1960s stirred it and triggered another slew of ‘odd jobs’ as the locals tried to catch up in a hurry: salt-and-strip Mickey Thompson’s ‘roller skates’; ‘Smokey’ Yunick’s ‘sidecar’; and Al Stein’s (in 1966!) Porsche-engined ‘pushmipullyu’.

Before downforce exerted its grip, turbines blew into town. With a helicopter engine slung from his left hip, Parnelli Jones came within four laps – and a dirt-cheap transmission bearing – of victory in 1967. It was nine laps and a broken fuel pump shaft for pole-setter Joe Leonard’s Lotus wedge the following year. 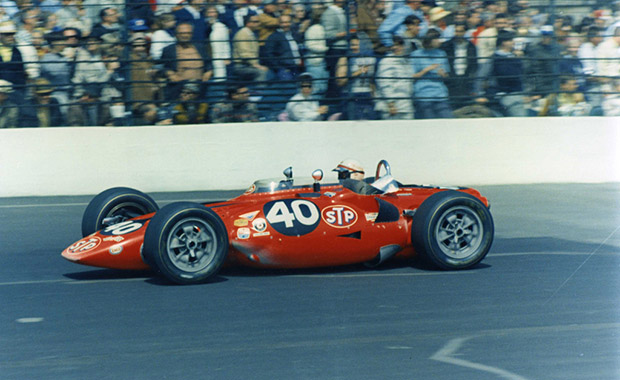 Thereafter, annuli were strangled even tighter to prevent any repeat.

Talk of a steam-powered challenger, meanwhile, vanished like a wisp of vapour.

The arrival of (proper) wings and slicks in 1972 set the template followed today: increasingly scientific incremental increases regularly checked by increasingly nervous and vigilant organisers. Next Big Things were ever more rare – Penske, Mercedes-Benz and Ilmor snuck a pushrod V8 past the (waste)gatekeepers in ’94 – and then extinct.

That’s no longer the case.

Yet wider interest is more preferable now than at any other period during the past 50 years. 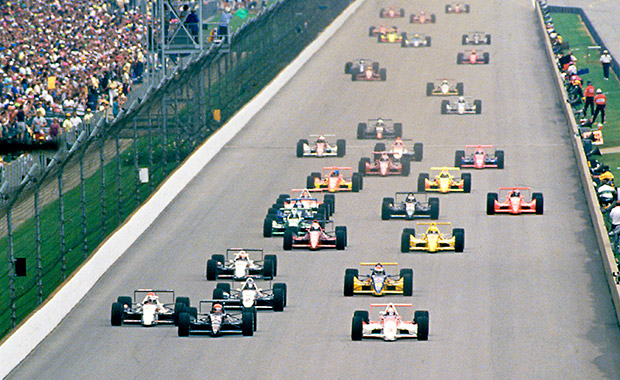 Now is the right time to reinvigorate with a view to reinvention. The industry has burgeoned, Detroit has boomed and gone bust, and Indy must grab this chance – its last if it’s not careful – to prove itself once more.

Having bio-fuel in its veins (since 2007) is no longer enough. It needs a Next Big Thing: a lean and green one.

Garage 34 must fling open its doors.

More from Paul Fearnley
No need for Red Bull to panic yet
The new F1: part of a cycle of change
The aesthetics of the Formula 1 nose