We all know that Mario Andretti was one of the world’s most versatile drivers, winning in Formula 1, Indycars and long-distance sports cars, as well as NASCAR stock cars, sprint cars and USAC dirt championship cars. He enjoyed a long career, racing successfully into his fifties, so what was his secret? 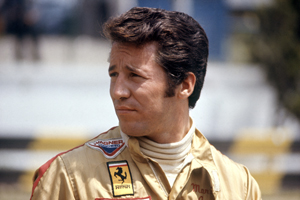 Ed Nathman was Newman/Haas team manager during the final years of Andretti’s career. Today, he is engineering director for Earnhardt-Ganassi Racing in NASCAR, running Juan Pablo Montoya’s cars. He says Andretti had a rare talent for reading the car and reporting his findings to the team.

“Mario was exceptional,” says Nathman (below with Jimmy Vasser in 2003). “You could put him in the car and right away he’d tell you what it was doing, and not many drivers can do that. I liked working with Mario a lot. He loved testing; Goodyear liked Mario for testing tyres because there was nobody like him.” 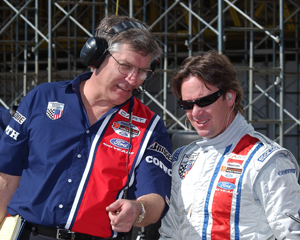 Donnie Hoevel worked for Newman/Haas for 22 years until 2007. He was Andretti’s chief mechanic during his final seasons racing Indycars and tells of the last tyre test Mario did for Goodyear in 1994 at Indianapolis. “They had every Goodyear engineer known to man out there and they all said they were disappointed because they all loved to do tyre tests with the old man,” he recalls. “There were times when they’d slip in a set of control tyres without telling him and he’d say, ‘Ah, you guys are trying to fool me! You can’t fool me. I know what you’re doing.’ There aren’t too many people who have that kind of feel.”

Peter Gibbons (below with Mario and Marco) was with Newman/Haas for 13 years until 2004. During this time he engineered Michael Andretti’s car and was Nigel Mansell’s engineer in 1993-94. He also engineered Emerson Fittipaldi’s Indycars in the ’80s and was Rick Mears’s race engineer at Penske Racing from 1989-91. Gibbons moved to Michael’s IRL team in ’04 where he’s now technical director. He says he’s never seen another driver with Mario’s relentless work ethic. 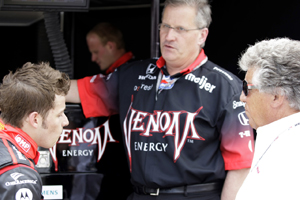 “It was just remarkable. He worked harder then anyone I’ve ever [seen]. Mears was so amazingly naturally talented that he didn’t have to work at it. Emerson worked at it, but Mario loved working at it. He was just phenomenal. He was a major contributor to our effort until the day he retired. Mario was the team. His contributions to our set-ups were incredible and he thought about it all the time. I never got the impression that Michael enjoyed doing it, but Mario just lived for it. He set the standard.” 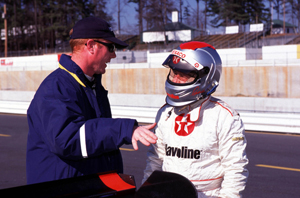 Bruce Ashmore, Lola’s Indycar designer from 1988-93, says: “Mario would be in the car at nine o’clock in the morning and, if you had to, he’d run every hour until six o’clock with the sun in his eyes. Yet he would run every lap the same so that the component you were testing was the difference that made the lap time. A lot of people in motor racing get it wrong. They want something to work because it was their idea. But that’s a mistake. Mario had the ability to cut all that out and just assess the part on its performance and how it fitted into the package.”

Adds Hoevel: “The guy treated you with the utmost respect. If you worked hard for him, he worked hard for you. He was the utmost professional and he’s a great friend today. I can call him any time. Mario’s pretty far up the pedestal. He drove as hard as he could all the way ’til the last day he got out the car.”