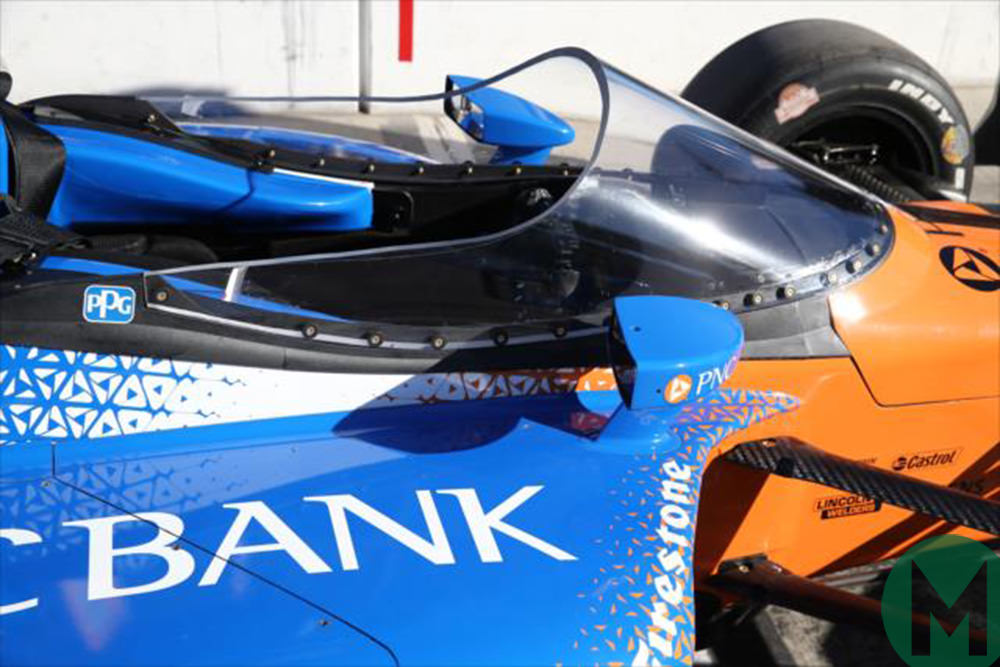 Chip Ganassi racer Scott Dixon tested the IndyCar windscreen prototype at ISM Raceway on Thursday in varied conditions – and gave it a thumbs up. Dixon tested the screen on the mile-long oval in afternoon sunlight, shadows, dusk and floodlit conditions, and said, “everything looks very good.

“I’m very happy,” he said to IndyCar.com, “And kudos to IndyCar for getting it out there and running it.

“We went through the biggest transition of lights [but] the hardest was probably the first run where we had extreme sunlight to darkness right through Turns 1 and 2.

“Out of all of them, the night-time was the easiest – no (visual) transitions there. I think for us it was basically seeing if there was going to be glare issues or anything with the lights,” he said.”

Since the death of Justin Wilson in 2015, IndyCar has explored options to protect the driver’s head from debris impact. Unlike Formula 1, which has adopted the halo device after Jules Bianchi’s accident at Suzuka in 2014, IndyCar has opted for the windscreen – thought to be a more aesthetically pleasing safety device to fans and drivers alike.

Sebastian Vettel tested F1’s version of the windscreen, dubbed the ‘shield’, at the 2017 British Grand Prix but said that it made him feel dizzy. The halo was then tested extensively, even though drivers such as 2017 champion Lewis Hamilton slated its appearance.

The 2018 F1 cars will all adopt the halo, as will the Formula 2 and Formula E grids.

IndyCar president of operations and competitions, Jay Frye, said: “We came here, we had a plan to run in light, at dusk and at dark. If any one of those had not gone well, we probably would not have been able to continue. They all went as well or better than we expected. Again, this is part of the process.”

However, Dixon admitted that the screen needed some getting used to, especially considering the lack of airflow towards the driver’s head.

“It’s hard to explain, but when you look through something like that, it does change – not the magnification, but almost like a magnification,” he said. “Your brain and eyes just need to catch up with it and the longer I ran, I got more adapted to it. It needs some cooling just because you get no airflow through the car.

“The weirdest thing was just how quiet it is,” he added. “You have no buffeting; the car feels very smooth. It feels like you’ve [driven] a really luxury dampened car. It didn’t feel that you were going as fast because you didn’t have any air pressure.”

IndyCar aims to adopt the windscreen at the end of the 2018 season, a year after F1 adopts its head protection system. The windscreen, still a prototype which will be modified in the near future, is manufactured by a company called Opticor, which makes canopies for F-16 fighter jets.

The series has also brought in its medical consultant to assist with the adoption of the screen, and more tests are planned on road/street circuits with different coatings to minimise glare and fogging. Further tests will be conducted and streamed live on the internet on Friday and Saturday evening.