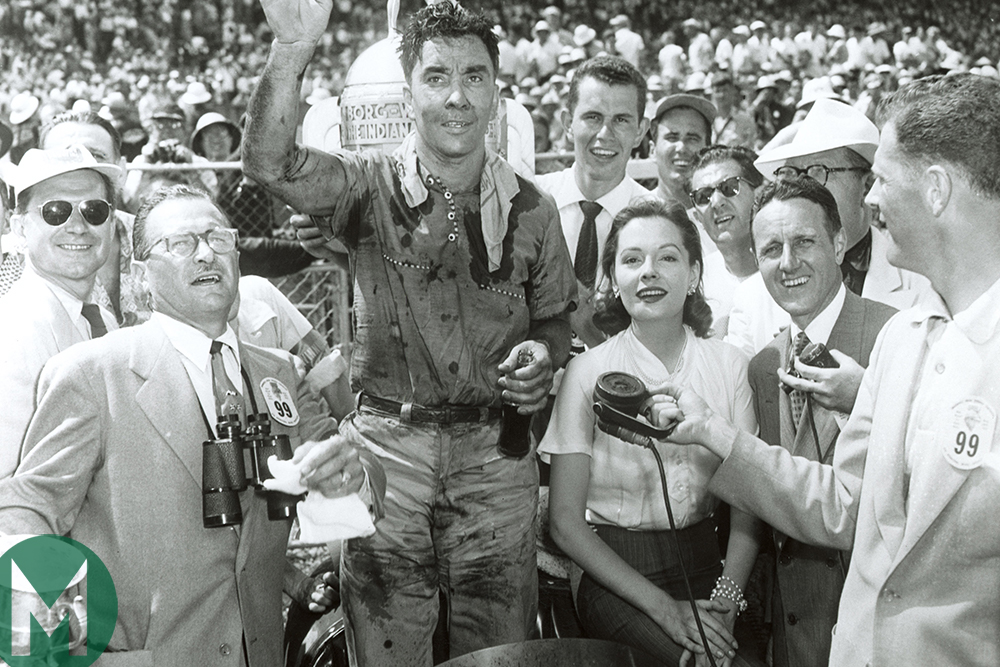 “He was madder than a wet hen. On an electric fence.”

Bill Vukovich rarely seemed in a good mood in truth. A joker among a closed (sic) circle of friends, his shyness was reckoned enigmatic by adoring wannabe fans and, at best, laconic by those unconvinced.

So when steering failure hung him on the wall eight laps from victory in the 1952 Indianapolis 500, his words were choice rather than carefully chosen, albeit aimed rather than sprayed.

That now there were even more fans and fewer – if any – unconvinced was of no interest to him. He raced for himself and with a cold fury that brought Tazio Nuvolari to mind and foretold of Ayrton Senna.

He had been a giant among Midgets on the muck-and-bullets dirt ovals of California, where brakes were for the weak – gaps for the brave.

Though he hated his ‘Mad Russian’ nickname – the Vučurovićs were immigrants of Serbian stock – it was indicative of his on-track demeanour if somewhat dismissive of the skill that enabled it.

Rex Mays and Wilbur Shaw, two of America’s pre-war best, were among the convinced. The former persuaded Vukovich to spread his wings westward – he won the national Midget championship of 1950 – and the latter loaned him his famous pre-war GP Maserati to undertake his rookie tests at Indy.

Vukovich did not qualify in 1950 and was short of suitors the following. His cocky strut and oddball/rubber ball fitness regime – he neither drank nor smoked – had not enamoured him with the Brickyard’s bigwigs.

And when he got his chance – partly through a case of mistaken identity – he predicted that his ‘tired iron’ wouldn’t last 30 laps. He retired after 29, because of an oil leak, having charged into the top 10 from 20th on the grid.

Thus the Indy landscape was transformed.

Vukovich hated it – “She’s towing a ton of bricks!” – until they jacked weight across its rear axle, Midget-style. Whereupon he cut a new groove: more spectacular yet faster and easier on tyres.

He was untouchable in 1953: pole – despite a cloudburst across the closing turns of his qualifying run – another fastest lap and 195 (of 200) laps led. Searing heat had relief drivers hopping in and out of hot tin cockpits. Yet Vukovich didn’t flinch: “Think this is hot? You ought to try driving a tractor in Fresno in July.”

The runaway earned him $89,497 putting this poor kid, whose hardscrabble farmer father had committed suicide during the Great Depression, into another tax bracket and smalltown races no longer made financial sense.

His 1954 victory was less straightforward, the faithful Kurtis-Kraft roadster lengthening in tooth.

He won by a lap after leading for 90 and was odds-on to become the first to win three straight.

But his plans for 1955 faltered when Keck’s ambition to build America’s answer to the Mercedes-Benz W196 Stromlinienwagen – to be powered by a bespoke V8 – caught the i-dotters of the Internal Revenue Service.

Vukovich switched to entrant Lindsey Hopkins’ year-old car – on the understanding that Travers and Coon were part of the deal – and made his usual early charge to the front, this time from the middle of the second row.

His was the domination game. So when ‘Nitro Man’ Jack McGrath, driver/crew chief extraordinaire, made good on his obvious threat, Vukovich swooped low and hooked the grass to pass.

He then broke the tow with his third fastest lap in four years.

By the time McGrath was whipping plugs from his smoking engine after 54 laps, Vukovich was 20sec to the good and carving through traffic with his usual panache so that Jimmy Bryan, the Midget hard nut from Arizona who’d run him closest in 1954, did not get ideas above his station.

It was then that McGrath sensed something was wrong. He turned to count the cars rushing past the pits. Five were missing. One was Vukovich’s.

Entering the backstretch for the 57th time the leader had happened across somebody else’s accident – that would become his own, his biggest and last.

Future two-time winner Rodger Ward was the first link in the chain reaction, spinning and flipping; Al Keller swerved in avoidance, snapped back across the track and collected Johnny Boyd amidships.

Vukovich had aimed at braver gaps. But none had closed so quickly. Tangling wheels with Boyd, he cleared the low wooden board that demarked the track’s edge and began tumbling.

More: Iron man made in Indy

Ed Elisian parked on the infield and risked his neck, the track still live, to try to save his close friend’s. In vain. The crash was unsurviveable even before the upturned wreckage caught alight.

News of 36-year-old Vukovich’s fatal accident was obscured in Europe by that of twice world champion Alberto Ascari, four days prior while testing a Ferrari at Monza, and less than a fortnight later by the Le Mans Disaster, the accident that rewrote the sport.

The American Automobile Association’s Contest Board – rocked by Vukovich’s crash – had seen enough and in August announced that it would end its sporting involvement at the year’s end.

Indy owner Tony Hulman formed the United States Auto Club to act as a sanctioning body. He knew that if his race was to continue to prosper, a farm system would have to encourage and cultivate all those Vukovich wannabees: good, very good and so-so.

None would be as great as Vukovich, but such was his margin – he’d led 71.7 per cent of the laps he’d completed at Indy – there was no shame in that.