There’s so much sport on the goggle-box these days that even the most ardent armchair hero must pick and choose.

Beyond motor sport – I draw the line at Supermoto – my required viewing is: Wimbledon, plus the latter stages of the French Open; the final 18 holes of the British Open; the Six Nations; baseball’s World Series; the mountain stages of the Tour de France; England Test matches – via radio and TV highlights; and the Lauberhorn and Hahnenkamm.

The latter are the blue riband events of the men’s Alpine downhill-skiing season. Both are throwbacks to when Formula 1 raced at the old Nürburgring and Spa-Francorchamps. Bar the addition of catch-nets and some easing of jumps, these hills – mountains, more like – are as they have always been: terrifying. Held on consecutive weekends in January, they are sport’s purest tests of skill, speed and courage.

Switzerland’s Lauberhorn, at 2.8 miles, is the longest on the calendar. Competitors exceed 90mph, leap from a rock face and arrow through a tunnel as narrow as Donington Park’s Stone Bridge. Fringed by the spectacular Eiger and Jungfrau peaks, it always seems to be held beneath an azure sky.

Austria’s Hahnenkamm is renowned for its vertiginous start, the freefall at Mausefalle, the ice wall of the Steilhang, and the jumps and compressions of the finish straight. It always seems to be run in mist and fog.

Given the balance and balls required, it’s no surprise that downhillers have often turned to motor sport for a speed fix after their knees have buckled. Winter Olympic Games gold medallists abound on the list of converts. 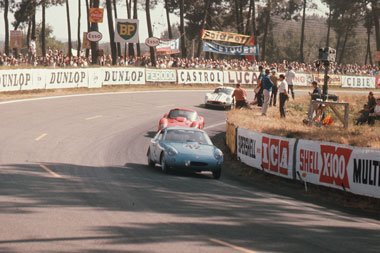 Henri Oreiller (above at Le Mans in 1962), the Parisian who grew up in Val d’Isère and won – by 4.1 seconds! – at St Moritz in 1948, switched to cars in 1952 and was a back-to-back winner of the prestigious Lyon-Charbonnières Rally. Sadly he crashed to his death driving a Ferrari 250 GTO in the 1962 Coupe du Salon at Montlhéry.

Jean-Claude Killy, the Frenchman who completed a gold clean sweep – downhill, giant slalom and slalom – at Grenoble in 1968, had only the year before teamed up with motor sport journalist Bernard Cahier to drive a Porsche 911S on the Targa Florio. They finished seventh overall and won their class.

In 1968, Killy shared a 911T with Jean Guichet, the 1964 Le Mans winner, in the 1000km races at Monza and the Nürburgring. They finished second and third in class. And in 1969, he co-drove a works Alpine A210 at Le Mans alongside Bob Wollek, who had been a team-mate of his in the French ski team. Broken suspension sidelined them after 20 hours.

Austria’s Franz Klammer, the greatest, most compelling downhiller of them all, a windmilling winner at Innsbruck in 1976, met with a modicum of success in the DTM and ETCC of the late 1980s in Mercedes-Benz 190Es.

Americans, too, have had a taste for this transition. 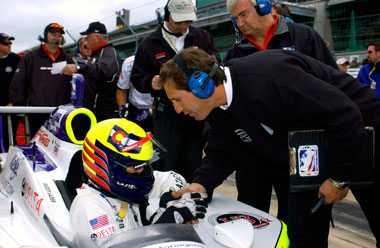 Philadelphia-born Peter Ryan provides one of the bigger what-might-have-beens en piste and on track. Scion of the family that owned the Mont-Tremblant resort in Québec, his ski dreams were compromised by a Can-Am squabble – he wanted to represent Canada without having to renounce his American citizenship – and then shattered by a heavy fall.

Ryan was a natural in a car too. He was just 21 when he won the inaugural Canadian GP at Mosport in the presence of Stirling Moss in an identical Lotus 19 sports-racer.

He was a whiz out of the cockpit as well: Roger Penske was a friend and fan, as was Luigi Chinetti, the influential boss of NART. Ryan looked potentially set to follow in the Ferrari wheel tracks of Phil Hill, Dan Gurney and Richie Ginther.

He arrived in Europe in mid-1962 on the promise of a Team Lotus Formula Junior drive, only for Colin Chapman to foist him on Ian Walker Racing, his semi-works outfit. Annoyed, Ryan won his heat at Monaco, ahead of the works Lotus 22 of Alan Rees, and the following weekend pipped Team Lotus’s category ace Peter Arundell at Mallory Park.

The laconic Frank Gardner, third in that race at Mallory, reckoned Ryan to be the fastest, albeit not necessarily the safest, road driver that he had ever sat alongside. John Pledger, Walker’s chief mechanic, who endured a wild trip to Reims in late June in the passenger seat of Ryan’s new E-type, concurred.

Pledger also undertook the onerous task of driving the Jaguar home after its owner had crashed fatally while battling for the lead of the first heat.

Ryan would have graduated to Formula 1 – had he escaped his first big accident – because he not only had the skill, but also because he had changed career path early enough. That’s how Patrick Tambay and Teo Fabi managed it in the 1970s and ’80s. 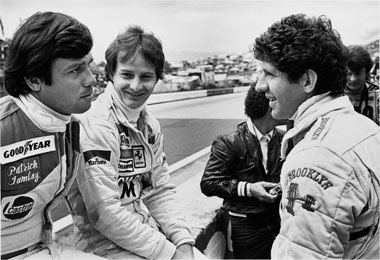 Tambay (above with Villeneuve and Scheckter) was a junior ski champion and a member of the French B squad during the Killy Era before being advised that he should return to his studies. Fabi, who as a teenager twice skied for Brazil in the World Championships of the early 1970s, was persuaded by his kart-besotted younger brother Corrado to steer a new course.

It was different in Piero Taruffi’s time. Either side of WWII a driver wasn’t considered to be in his prime until he was in his late thirties. The Italian ‘Silver Fox’ – a top-rank skier, excellent bobsledder, bike- and car-racer pre-war – was 45, and driving a works Ferrari 500, when he scored his only World Championship GP win, the 1952 Swiss at Bremgarten. 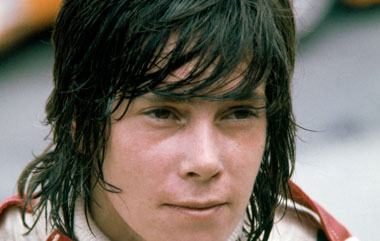 To be honest, I’d always been sniffy about her F1 fast-tracking by Brands Hatch’s publicity-conscious boss, John ‘Spider’ Webb: she DNQ-ed her Surtees TS16 at the 1976 British GP. She twice failed to qualify on her attempts with ailing Hesketh in ’78 too, although the good Lord was no doubt thankful for her Olympus money.

Three strikes, and Galica was out. Upon a reflection – and after a bit of digging into the results of Britain’s Shellsport G8 Championship – that might have been harsh. She had earned her second chance.

Twice in 1977 – at Snetterton and Donington – she had been within a place of becoming the first women to win in a Formula 1 car. Tony Trimmer, a star of early Formula Ford and the 1970 British F3 champion, denied her on the latter occasion, but Galica’s sister TS19 matched his fastest lap. She finished second at Zandvoort too, in 1978’s inaugural Aurora F1 series.

In 1980, Desiré Wilson, another Webb protégée, did become the first and so far only woman to win an F1 race. She was unquestionably a better driver than Galica. But then again, the South African never represented her country at three Winter Olympics, nor did she finish in the top 10 of the giant slalom at two of them: Galica was eighth at Grenoble and seventh at Sapporo in 1972.

Aged 47, having also competed in nimble sports-racers and rumbling trucks, Galica returned to the Olympic slopes in 1992 to contest the ‘demonstration sport’ of speed skiing.

Turns out that balance is the only prerequisite.