Race day is only part of the Indy 500, as Fernando Alonso has found out. But he’s been taking everything in his stride 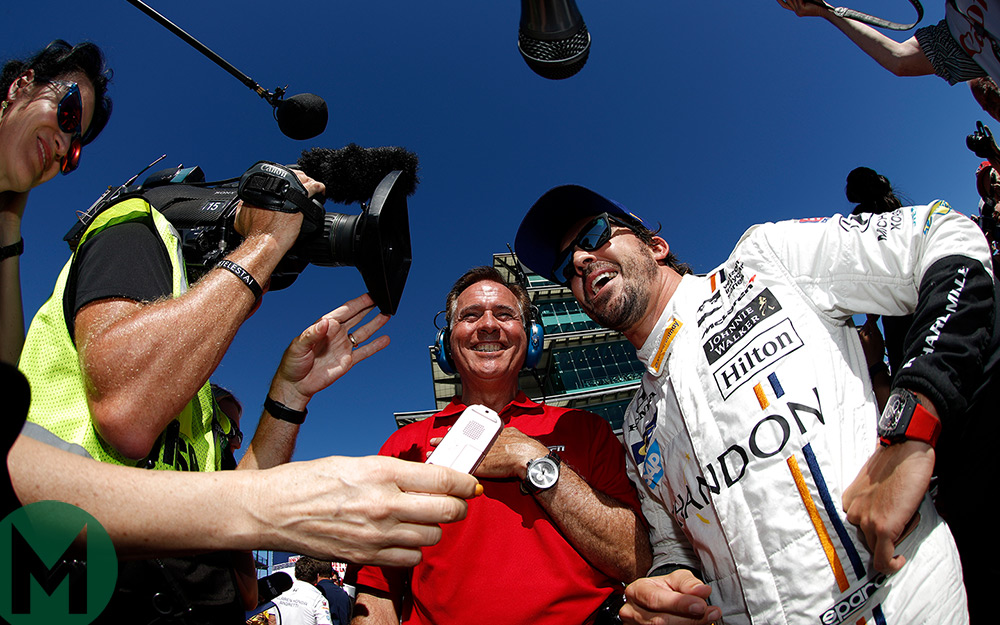 “Dad! Alonso is at my school!”

It’s usually never good news when you receive a 9:30 a.m. call from your fifth grader, but this was the exception to the rule. Sure enough, Fernando Alonso – along with IndyCar Series regulars Ryan Hunter-Reay and Conor Daly – were just a couple blocks away at the school my son attends, just outside Turn 1 of the Indianapolis Motor Speedway.

Alonso may be a two-time Formula 1 world champion who is currently the center of an international media blitz, but that didn’t excuse him from the seemingly mundane media and public relations tasks that every driver in the Indianapolis 500 field has traditionally participated in.

So Alonso started his Wednesday morning with about 200 students at Carl G. Fisher Elementary School, taking part in Indianapolis 500 Community Day. Alonso, along with the rest of the 33 drivers in the ‘500’ field, played with LEGO blocks and encouraged kids to explore science- and technology-related careers at a host of schools all over greater Indianapolis.

“Someone on our media team sent me a video of him doing the school appearance, which I hadn’t yet seen,” laughed McLaren Technology Group CEO Zak Brown, the man responsible for bringing Alonso to Indianapolis. “My comment – and Fernando’s – was ‘Welcome to INDYCAR!’ with a big smile.

“It certainly is substantially more work than he’s accustomed to for a race weekend, but he loves it,” Brown continued. “From the moment we landed in Indianapolis for the test with fans waiting outside the airport, to visiting these schools, I think it’s a breath of fresh air for him. He’s enjoying it. He’s doing all of it, and he wants to do it. He feels very welcomed by the INDYCAR club.”

So far, Alonso’s Indianapolis adventure in conjunction with McLaren, Honda and the Andretti Autosport IndyCar team really couldn’t have gone much better. He got up to speed quickly, was generally blessed with decent enough weather to get though an accelerated testing program, and he qualified a solid fifth for the race.

His impressive performance to date hasn’t come as a surprise to people who really ought to know.

“So far all month he’s gone about it the right way,” observed Tim Cindric, the man who runs Roger Penske’s racing empire. “He’s put himself in great equipment, surrounded himself with good people, and most importantly, he seems to listen. He doesn’t know it all.

“We haven’t had a lot of interaction, but obviously Gil de Ferran (Alonso’s Honda-appointed Indianapolis mentor and ex-Penske driver) and I talk, and every step of the way he’s been solid.”

For Alonso, the out-of-the car responsibilities that come with being an IndyCar driver – especially at Indianapolis – might have come as a bigger culture shock than learning about a different style or car, or oval racing.

But with the exception of an off-site media day in New York that he felt was unproductive, the F1 star has enjoyed every aspect of his American experience so far, responding to every interview or autograph request with a smile and his full attention.

“It’s been intense since the moment we announced we were going to the Indy 500,” Alonso admitted. “There were a lot of activities we had to learn but so far we have been very happy with everything – the experience, and how competitive we have been.

“So far it’s been an amazing thing,” he added. “I’ve discovered a new series, and I’ve been learning from zero again – I’m a rookie, a beginner at everything I did. That, I think, wakes up all your senses and the racing driver that you always have inside yourself that maybe accommodates a little bit when you are in your normal series.

“When the race starts, I think it will be a very special moment, a very emotional moment.”

The IndyCar drivers have been very accepting of Alonso, save for some off-the-cuff remarks from Graham Rahal taken out of context by a local radio station that caused the American driver some grief.

As a group, they know that Alonso’s presence is directing a lot more worldwide attention to the Indianapolis 500 than the race would have otherwise generated this year without him.

“I think it’s great for motor sport in general,” observed two-time Indy 500 winner Juan Pablo Montoya, who in addition to winning an IndyCar championship raced against Alonso in F1.

“It’s a huge, massive hit for IndyCar, out of the stadium,” Montoya said. “For motor sport globally, they’re going to realize how big the Indy 500 is and I think it’s going to be very special.

“I hope he runs well, but not too well!”

That said, Montoya likes Alonso’s chances on Sunday. He believes Alonso has an easier task ahead of him than when he came to Indianapolis as a 23-year old rookie in 2000, running a different style of car as an interloper from the alternate CART-sanctioned Indy car series.

“Right now all the cars are pretty even and he came in with a good team,” Montoya said. “He has all the background from McLaren engineering and they’re going to get full support from Honda. You’ve got to think that engine is really going to run here. They can squeeze the hell out of that engine. So he’s in a good position.

“Fernando is pretty calm about it. But when you walk out on Sunday and you see this place packed, it’s a different story.” 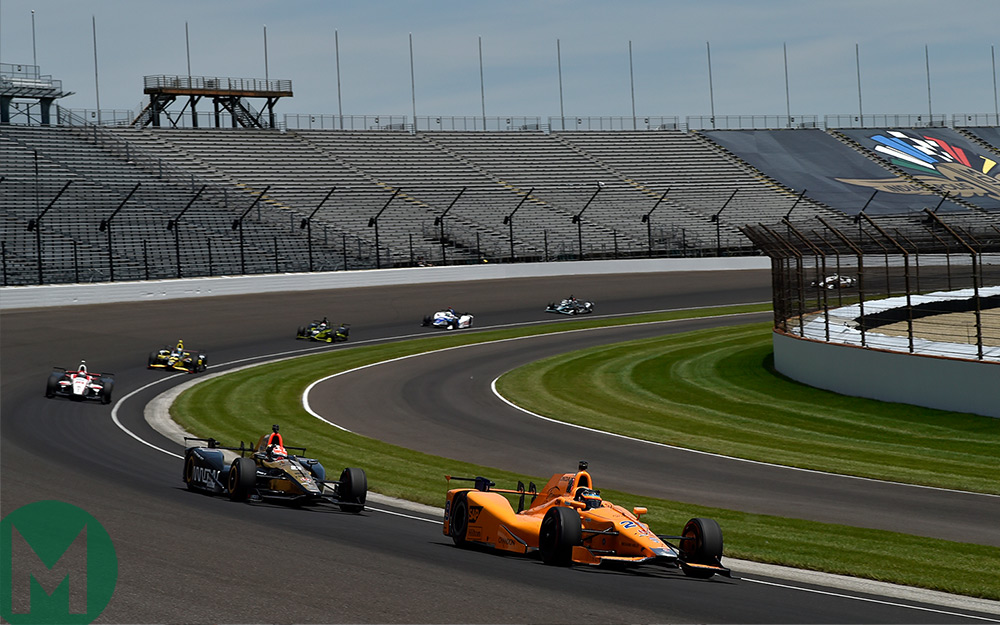 Montoya’s Penske team-mate Will Power believes Alonso has done an outstanding job to date, but warns that things can turn quickly in oval racing.

Power went five years and 31 starts before scoring his first oval win, and that came in a half-length “Twin” race at Texas Motor Speedway in June 2011. It was not until the 2013 season finale at Auto Club Speedway that Power reached Victory Lane in a 500-mile oval contest.

“Obviously he’s raced open wheel cars his whole life, but ovals can give you a lot of confidence until something happens,” Power said. “The real true measure is when something happens and then you get back in. Ovals are all about confidence and it’s amazing how when you lose confidence how much it can affect you.

“He’s done a good job, he’s kept it clean, and if he keeps it clean in the race, he’ll finish right up there and he has a shot at winning it.”

Alonso admitted that he will probably learn more in the first one hundred laps of Sunday’s race than he has in all of his time at Indianapolis so far.

Scott Dixon, the pole winner and one of the most accomplished Indy car drivers of all time with 40 race wins, backed up that prediction.

“He’s done an amazing job, which I think everyone expected, especially with the team he’s with and the support he’s got around him,” Dixon said.

“The pace is generally not too crazy for the first 100 or 140 laps, and then it turns up a couple notches. The last part of the race is when he gets to a different league.”

How Alonso reacts if he is in position to contend for victory on Sunday remains to be seen. We’ve seen enough to know that if everything that needs to go right for a driver goes right for Alonso, he’s going to be an intimidating competitor for the IndyCar regulars.

No matter how his race goes, Alonso’s presence has given the Indianapolis 500 the boost it needed to combat the inevitable drop-off from last year’s celebration of the 100th running of the historic event.

It’s a story with worldwide PR value, but it’s not a PR stunt. It’s the remarkable convergence of a driver wanting to break out of the mould and a team (and team principal) with the exact circumstances and ability to make it happen.

The best part of all is that Alonso seems to be genuinely enjoying the entire experience – elementary school visits and all.

“You know, I didn’t start with the 20 miles of Cincinnati – I started with 500 miles of Indianapolis, the biggest race in the world,” he said. “There is no time to learn. You need to perform immediately. It has been extremely challenging but extremely rewarding.

“I’m sure we can have a chance,” he added. “Maybe lower than some of the big guys because they have the experience and the little tricks they will play at some point in the race, and I will not have those.

“But I will try to compensate with determination, good speed and focus on the important moments.”